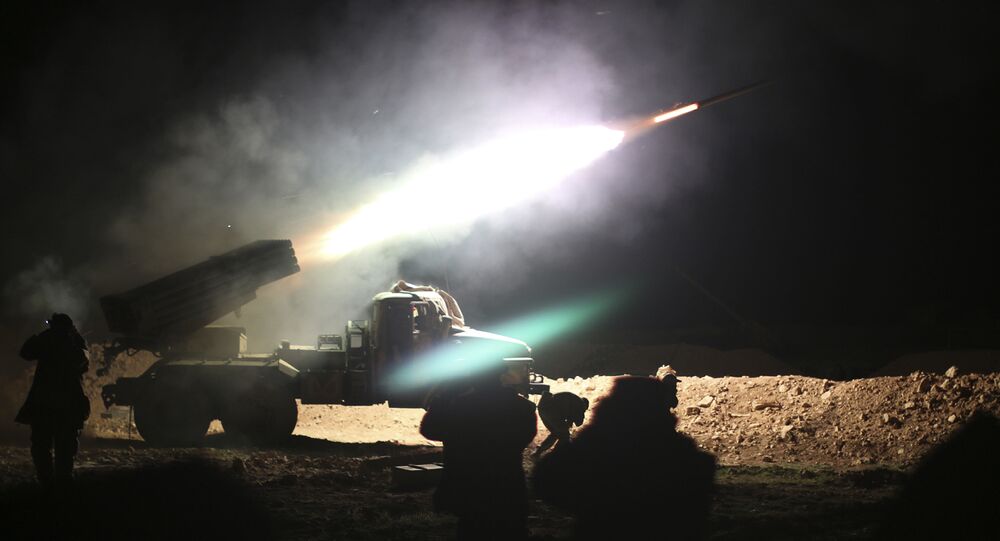 The Obama administration pledged to play an integral role in liberating the city of Raqqa, but US-backed forces are moving in the wrong direction and are now nearly 80 miles from the Daesh stronghold.

The Syrian Army (SAA) continued to advance on Raqqa after seizing the Taqba dam on the Euphrates River only 25 miles (40km) from Raqqa this weekend. The surge represents the first time that Syrian forces have entered the Raqqa province since 2014 when Daesh first began its terror campaign.

The SAA’s assault on the Daesh stronghold has been supplemented by unrelenting Russian airstrikes in the eastern areas of Hama province, bordering Raqqa. The aligned forces are currently situated in the town of al Tabqah, recently cleared of Daesh and which served in 2014 as a launchpad for Daesh attacks, given its proximity to Raqqa.

At the same time, the US-backed and Kurdish-dominated Syrian Democratic Forces (SDF) have reversed their position and refocused military strength toward recapturing the city of Manbij, in a bid to strengthen the opposition group’s position to destabilize Syria’s Assad regime.

The retreat by the US-backed SDF, which had previously been in competition with the Russian-backed SAA in a collective bid to recapture Raqqa from Daesh, presents a major strategic setback for the Obama administration, employing the dual goals of ousting Bashar al-Assad while also liberating territory from Daesh.

Financial Times reporter William Wallis wrote on Monday that by recapturing Raqqa ahead of American-backed forces, the Russian and Syrian armies would "poke the Americans in the eye in a place they have long talked of helping to recapture."

What has been to date a productive competition could erupt into a conflict between the partners, with the two-sides sharing very different geopolitical views. Russia believes it is necessary to prop up the Assad regime, at least until Daesh has been vanquished. The United States believes it is necessary to support opposition forces and oust Assad. The US effort has often stumbled, with American weaponry consistently falling into the hands of al-Nusra terrorists aligned with violent rebel groups.

Others see the retreat by Kurdish-dominated forces as acquiescence by American military strategists, suggesting that the US and Russia are coordinating efforts to liberate territory in Syria.

US Defense Department spokesperson Peter Cook rejected this explanation, saying "in terms of direct coordination of activities on the ground [between the US and Russia] that is not happening."

The possibility remains that both the US-backed SDF and the Russian-backed SAA could meet in Raqqa, potentially escalating tensions between Moscow and Washington. The strategic repositioning of American troops, however, has minimized that possibility albeit at considerable expense to the Obama administration.

With both sides planning to soon descend on Raqqa and bring an end to a civil war that has killed 500,000 Syrians, Loud & Clear’s Brian Becker sat down with Zafar Bangash of Toronto’s Institute of Contemporary Islamic Thought to discuss the situation.

​Are the US-Backed SDF and Russian-Backed SAA Forces Cooperating?

"I don’t think there is coordination between the two sides,” said Bangash. More so there appears to be a race towards Raqqa, although the Syrian Army seems to be better placed because they have already captured al Tabqah right next to a dam on the Euphrates River, and they are trying to take control of the airport there."

"The Syrian Army is only 40km (25 miles) southwest of Raqqa whereas the Syrian Democratic Forces, dominated by the Kurds, have headed in the opposite direction, towards Manbij, which is 136 kilometres (85 miles) away from Raqqa, so the Kurds are much further away right now."

Bangash explained that Kurdish forces are focused on playing the long game by consolidating their own territories with a view toward having a stronger hand in future negotiations, but potentially at the expense of the United States losing the race to be the first to seize Raqqa.

What is the relationship between the US military and the Kurdish-dominated forces?

"The United States is backing the Kurds fully," said the commentator. "There are US special forces working with them and American forces wearing Kurdish uniforms have been viewed guiding them in operations, which has been problematic for relations with Turkey who has adamantly protested this."

Bangash explained that the United States' willingness to support Kurdish fighters even over the protests of Turkey indicate that the Obama administration is "keen on preventing the Syrian Army from taking control of their own country" by strengthening alternate forces to ultimately weaken Assad’s control over the Syrian government.