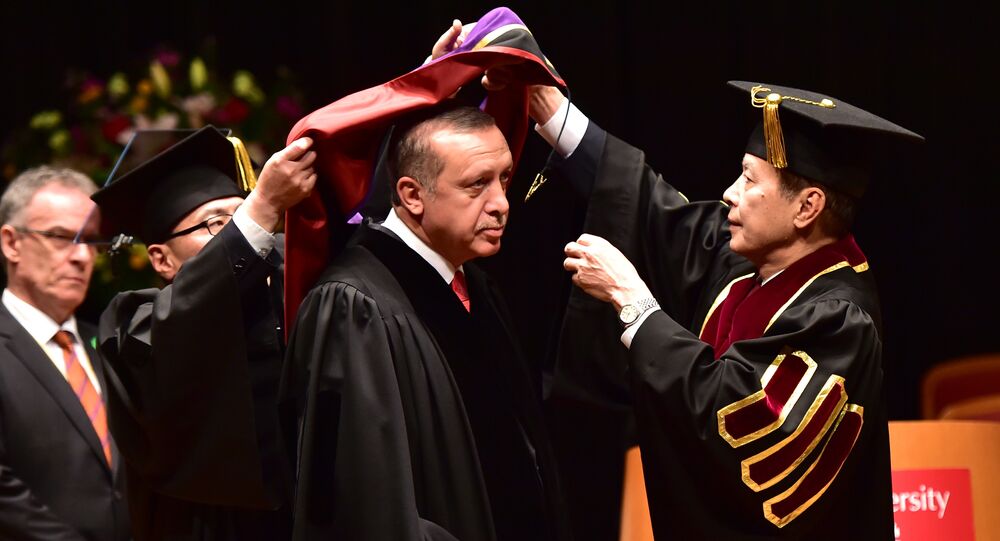 President Recep Tayyip Erdogan is apparently facing yet another scandal as Turkish social media are struggling to find out whether he actually has a diploma.

© AFP 2020 / ADEM ALTAN
Life Term: Erdogan Needs to Stay in Power to Avoid Criminal Charges
It should be noted that possessing a university diploma is one of the eligibility requirements for serving as a President of Turkey.
The issue became so poignant that the provost of Marmara University has officially declared that Erdogan did indeed finish his 4-year higher education.

Following that, the Turkish president himself also stated that he and the provost actually studied in the university together.
Nevertheless, these statements have not put an end to the discussion.

A Turkish journalist named Rafael Sadi told Sputnik that he actually studied together with Erdogan at the university as they both enrolled in 1974. He did point out however that he doesn’t know whether the current Turkish president successfully graduated or not.

"Back then no one really bothered about the difference between a higher school and a university. The only thing that mattered was whether you were planning to join the army after you’re done with your studies. I for one never finished my education and left during my fourth year… I don’t know whether mister Erdogan completed his education and got his diploma or not. But I do know that he did study at the university," he said.

Meanwhile, Omer Faruk Eminagaoglu, former president of the Association of Judges and Prosecutors, appealed to the Supreme Electoral Council, asking to conduct an official investigation into Erdogan’s higher education and to determine if there was a breach of the country’s electoral legislation.

"The issue currently being discussed is whether the president actually has a diploma or not. The problem is that there’s no original of the diploma. There is also some very controversial information regarding his admission to the university and his graduation. All of this raises doubts and some very pertinent questions," Eminagaoglu told Sputnik.

He pointed out that the only organization that could resolve this tricky issue is the Supreme Electoral Council, but so far it has been uncooperative.

"There are currently three documents available: a temporary diploma, a copy of the diploma and a certificate issued after the diploma’s registration. And there are some suspicious discrepancies between these three documents. Therefore, we insist that this matter is properly investigated," he concluded.