While the US is backing up the Syrian Democratic Forces (SDF) in their “long and grueling fight” against Daesh, Stratfor provides an answer to why Washington refuses to cooperate with either Russia or Turkey on the ground in Syria, noting that the reason is “high price” it would have to pay for assistance.

© Sputnik / Iliya Pitalev
Russia Will 'Poke US in the Eye' if Assad Retakes Raqqa Before Rebels
Stratfor, a US-based intelligence company, specializing in strategic forecasting and known as the “Shadow-CIA” has recently provided its own explanation of why the US does not want to cooperate with either Russia or Turkey on the ground in Syria.

“The United States, of course, wants the offensive against the Islamic State to succeed,” it says in an article on its website referring to the efforts to liberate the Daesh stronghold of Raqqa.

“If the Russia-backed loyalists retook Tabqa en route to Raqqa, the Islamic State's (Daesh’s) supply lines would be strained, aiding the SDF's assault from the north,” it further notes.

However, it notes, Washington shows no enthusiasm in accepting Russia’s assistance, and here is why.

“The United States also knows that Russia's assistance in this fight comes with a price,” Stratfor says.

“Russia has already tried, through peace talks and spoiler attacks, to use its involvement in Syria to draw the United States into a negotiation on broader issues — sanctions against Russia over Ukraine and the scale of NATO's military buildup in Europe, for example,” the company further suggests. 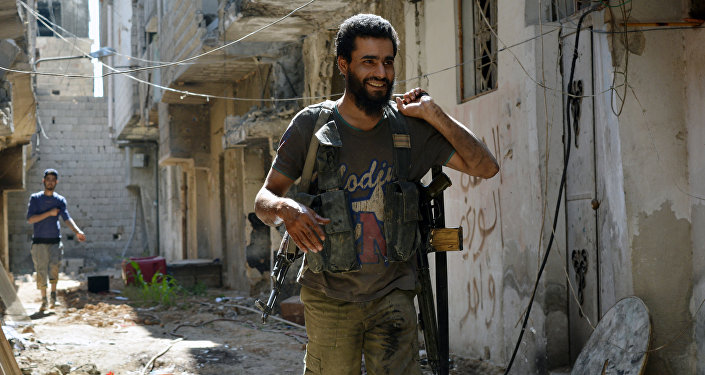 © AFP 2019 / RAMI AL-SAYED
Why 'Moderate' Syrian Rebels Remain Deaf to Washington's 'Orders'
Therefore, it says, the White House has been “receptive to a dialogue on tactical coordination here and there with Moscow, but Washington does not feel particularly compelled to make substantive concessions to Russia.”

Russia's intent in the coming weeks, it also suggests is “to ensure that coordination becomes an unavoidable issue for the United States.”

“Should Russia-backed loyalist forces come close enough to US-backed SDF forces in Raqqa, Russia can position itself as either the ally to help nail the Islamic State or the obstructionist that targets the SDF forces that the United States relies on to retake Raqqa.”

With regards to Turkey, the company says the US should also “keep it at bay” on the ground.

“Had it not been for its falling out with Russia, Turkey would likely have been leading this offensive itself,” it says, referring to the SDF’s offensive against the Islamic State in Manbij, about 40 kilometers from the Syria-Turkey border.

“Not only would it have been fighting to uproot the Islamic State, but at the same time it would have been in a position to prevent Kurdish forces within the SDF from using the resulting power vacuum to expand their territory,” it notes.

Turkey has already made clear its extreme displeasure with the United States for working with Kurdish forces in the SDF.

© REUTERS / Omar Sanadiki
'Asymmetric Approach': This is Why the Syrian Crisis is Still Unresolved
“To keep Turkey at bay and to keep the SDF's focus on the Islamic State, the United States has given Turkey assurances that more Arab forces will be employed within the SDF in the Manbij operation and that the Kurdish People's Protection Units (YPG) will not be able to take advantage,” the company notes.

However these assurances are somewhat disingenuous, it suggests.

Turkey knows that the US will be an effective constraint on “Kurdish expansion” only so long as the US remains heavily invested in the fight against the Daesh.

“The more success the United States has in that fight, the more it can pull back and leave it to the local forces to hold their ground. At that point, Turkey wants to be ready to fill the void.”

Turkey has already warned that any perceived violation of its understanding with the United States will prompt Turkish action.

“Turkey is already laying out its justification for a future intervention in northern Syria, but there is still that pesky detail of Ankara's working out an understanding with Moscow to avoid clashes on the battlefield,” Stratfor suggests.

And Ankara will be searching for an opening in a “forced dialogue” between Moscow and Washington to help clear the way, it finally states.