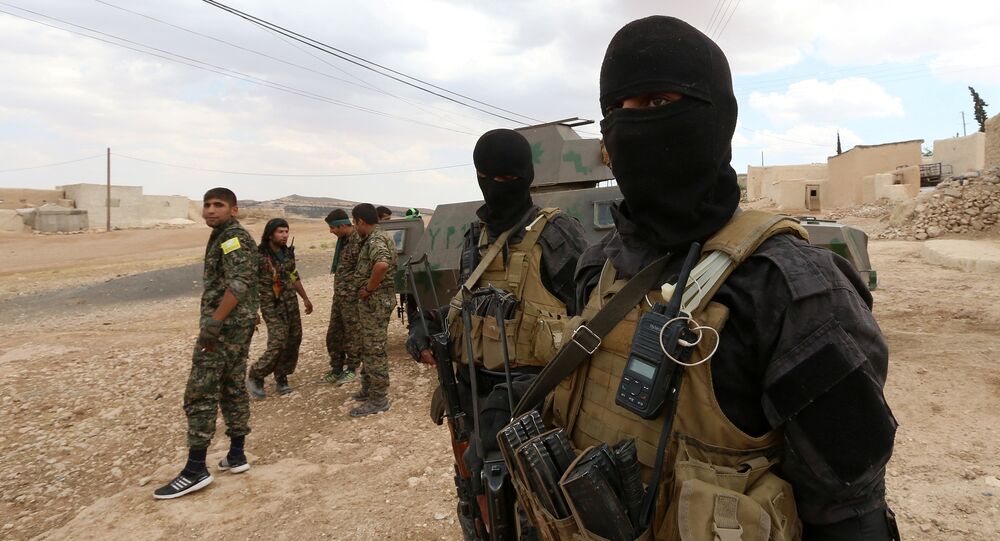 Daesh is on the defensive at the Turkish-Syrian border and Ankara needs to respond to the failure of its Syrian tactics by working with the Kurds, former Turkish diplomat Aydin Selcen told Sputnik.

© Sputnik / Mikhail Voskresenskiy
Will Syrian Government Troops Join the Race to Raqqa?
Amid concerted offensives to liberate the Iraqi cities of Raqqa and Fallujah from Daesh terrorists, on Wednesday the Kurdish-led Syrian Democratic Forces (SDF), backed by the United States, also began an offensive against Manbij to free the Syrian city from Daesh. The city is in the governorate of Aleppo, and is located close to the Turkish border.

In November last year Turkey was so belligerent it shot down Russia's Su-24 fighter jet which was was carrying out anti-Daesh operations in northern Syria, close to the Turkish border.

Now the situation is very different, and though Ankara is opposed to international cooperation with the Kurdish forces fighting Daesh, it is no longer in a position to protest, former Turkish diplomat Aydin Selcen told Sputnik.

"The speed of the SDF units' movement into Manbij shows that the liberation of the area under the control of the SDF, and with it the strategically important towns of Azaz and Marea in its west, is just a matter of time," said Selcen, who was the Turkish consul in Erbil, the capital of Iraqi Kurdistan.

"The liberation of Manbij enables the creation of a corridor between the Kurdish regions of Afrin and Kobani. Or course, this step would have a negative impact for Ankara and its Syrian politics. Nevertheless, I get the impression that Ankara has toned down rhetoric regarding Manbij."

© Sputnik / Grigory Sysoyev
Russian Su-34 Strikes Oil Refinery in Daesh-Controlled Area of Hasakah Province in Syria
Selcen said that one of Turkey's tactics in Syria is to isolate the Turkish-Syrian border area from Syrian government forces, from Daesh, and from the (primarily Kurdish) People's Protection Units (YPG).

However, the strategy is fundamentally flawed, and the Turkish government is not in agreement about its merits.

"The rhetoric and actions of the Turkish government regarding Syria and other areas of foreign policy is constantly changing. There isn't one balanced political strategy, that's why Turkey's seriousness, predictability and dependability as a player on the international scene are in doubt."

"Everybody is listening to the announcements, and not the real actions. That has led to the US, which has seen the inconsistency and ineffectiveness of Turkish-supported groups in clearing the border of Daesh fighters, to give the 'green light' to the SDF in the region," he said.

Selcen said that Turkey will be faced with greater threats to national security as Daesh and al-Nusra Front fighters lose their positions in Syria and are forced back towards the Turkish border and the territory from which they receive the logistical support to launch their attacks: these include the Turkish provinces of Hatay, Gaziantep, and Kilis.

"Without establishing connections with the Kurdish community in Syria and Iraq, with the Democratic Union Party and the Kurdish YPG units in Syria, we can't guarantee the security of our border territory."

"However, Turkey is doing the opposite, conducting operations within its borders which only increase tensions with its neighbors."

"If Ankara's foreign policy strategy is not revised in the near future, all the indications are that we will unfortunately have a very nervous summer," Selcen said.

Turkey Accused of Denial Over Armenian Genocide Amid Diplomatic Spat