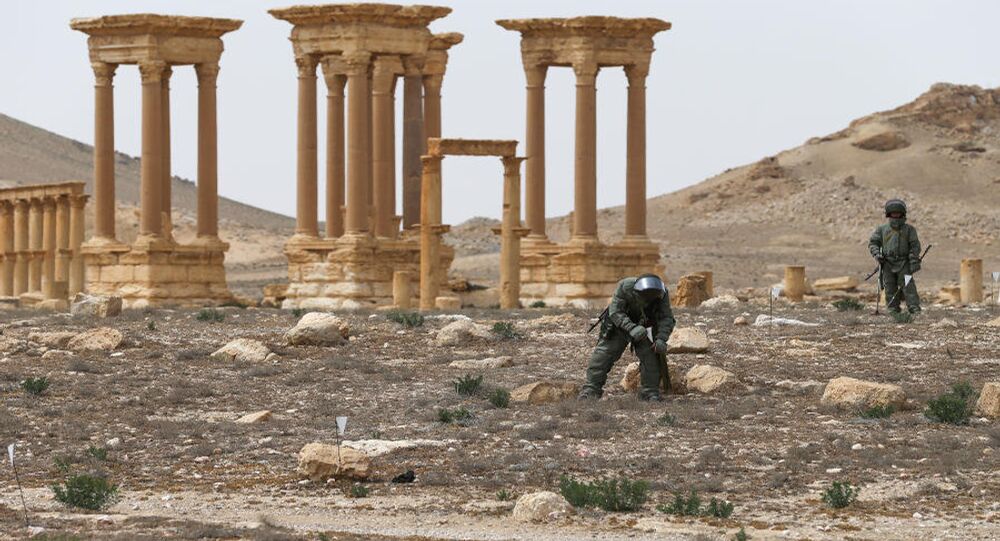 Hope remains that historical structures in Syria’s ancient city of Palmyra could be put back together, an internationally renowned German archaeologist told Sputnik on Thursday.

© Sputnik / Mikhail Voskresenskiy
Syrian Army is Getting Ready for a Triumph Similar to Liberation of Palmyra
BERLIN (Sputnik) – The 2,000-year-old city was recaptured in March from Islamic State militants by Syrian troops with air support from Russian jets. The UN culture agency UNESCO sent its first mission to assess the damage in April and is holding an expert meeting in Berlin with Syrian historians.

"Photos I’ve seen suggest that the structures collapsed. This means that restoring them might be not that difficult," Prof. Hermann Parzinger, head of the Prussian Cultural Heritage Foundation (SPK), said.

In Iraq, many ancient clay buildings were reduced to dust by Islamists, while in Syria’s Palmyra structures were built of stone blocks and crumbled after they were detonated. They could still be pieced back together, according to the archaeologist.

"Theoretically, as you see during archaeological excavations, there is a way to dig out part of a structure and write down the exact location of every single stone. You could determine by the looks of fragments and their position where every block fitted in the structure. In that way, the entire building could be restored," Prof. Parzinger explained.

Palmyra is one of UNESCO’s six World Heritage sites in Syria. After seizing the ancient city in May 2015, Islamists looted the centuries-old ruins, blowing up Palmyra’s landmark Arch of Triumph, the temples of Bel and Baalshamin, as well as numerous statues.

US-Led Coalition Hits Daesh Near Palmyra Without Coordinating With Russia