On top of $1.3 billion in military aid, the US has promised to provide Egypt with over 750 free armored vehicles, the first batch of which was delivered last month. Unfortunately, according to Washington Post columnist Jackson Diehl, the assistance doesn't seem to have eased Egypt's fears of US-backed color revolutions.

Last month, the US delivered the first batch of 762 Mine-Resistant Ambush Protected Vehicles (MRAP) to Egypt, the vehicles meant "to help Egypt combat terrorism and promote stability," according to the US Embassy in Cairo.

But not all is well in US-Egyptian relations. According to Washington Post journalist Jackson Diehl, Cairo has responded to the free combat vehicles by giving America "a slap in the face."

The 'slap', Diehl wrote, consists of recent statements by the Egyptian leadership, including President Abdel Fatah al-Sissi, to the effect that the United States has been attempting to destabilize Egypt and the Middle East as a whole. 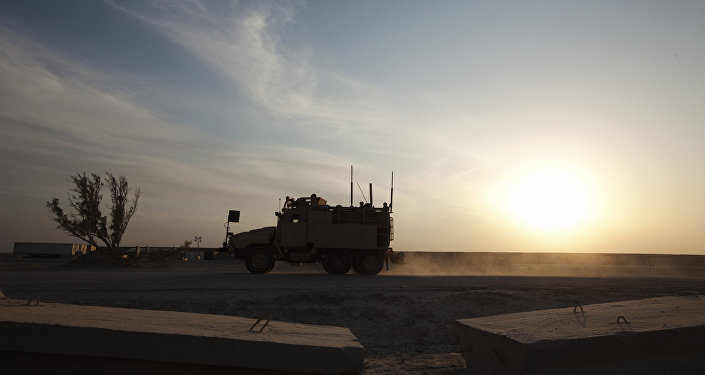 © AP Photo / Lucas Jackson
US Delivers Mine-Resistant Vehicles to Egypt to Combat Terrorism - Embassy
The Egyptian military has been fighting an Islamist insurgency in the northern Sinai region since 2013, when the army overthrew Islamist President Mohamed Morsi, who came to power on the wave of the so-called 'Arab Spring' that swept the region between 2010-2012.

But Sissi's real ultimate enemy, Diehl suggested, "is not the Islamic State and other Muslim extremism, but Western liberalism – headed by the United States."

This, according to the journalist, is evidenced by the Egyptian leadership's concept of 'fourth-generation warfare.' This kind of warfare, "Sissi once explained to cadets at Egypt's military academy, occurs when 'modern communication channels, psychology and the media are…deployed to create divisions and harm Egypt from within'."

And the enemy in this war, Diehl complained, is "the United States – the same country providing the army with those free armored vehicles and billions in aid."

Adding insult to injury, the journalist recalled that in March of this year, the same month that the US lifted its arms embargo against the country in connection to the 2013 army coup against Morsi and the Muslim Brotherhood, "the Defense Ministry's Nasser Military Academy briefed the parliament about fourth-generation warfare," with "subjects includ[ing] 'Egypt's defense strategy and Western plans to divide the Middle East.'"

With local media taking a similar tone, suggesting that the country's civil society NGOs, sponsored by the United States, are willing to "demolish the state through fourth generation warfare for a few dollars," Diehl warned that such "anti-American ranting" is by no means harmless.

© AP Photo /
Egyptian Military Destroys 19 Terrorist Targets in Sinai, Killing Eight
"We know that because the military has been acting on its theories," the journalist noted. He recalled that prosecutors recently reopened a 2011 court case against a series of Western-sponsored human rights groups, "banning their leaders from leaving the country and asking a judge to freeze their personal assets."

Worse yet, Diehl suggested, "during the first round of the case, the regime directly targeted US organizations such as the International Republican Institute and Freedom House, forcing them to shut down their operations and pull their staff out of the country."

According the journalist, "there is no contradiction" in Egyptian generals' minds to use Washington-supplied tanks, MRAPs and F-16 to fight Daesh in the Sinai, while "direct[ing] their intelligence services and prosecutors to assault America's subversive agents in Cairo."

Meanwhile, the Obama administration hasn't objected to Egyptian leaders' behavior; "in fact, it has asked Congress to remove all political and human rights conditions on military aid to Egypt in next year's budget."

This is a problem, in Diehl's view, because "US support of the Egyptian military is serving to destroy US relations with Egypt," with "secular supporters of democracy and human rights, our natural allies…being crushed. Meanwhile, Egyptians are being fed propaganda describing the United States as the sponsor of a massive plot to divide and destroy the country. From Washington's point of view, it seems like a poor return on one of the largest aid packages in the world."

For this reason, the journalist insisted, Egyptians should be told, in "a prime-time televised statement by Sissi, in Arabic…that the United States is not plotting to destroy the country and has nothing to do with a 'fourth-generation war'. It doesn't seem like much to ask in exchange for 762 free MRAPs," Diehl concluded.

US Delivers Mine-Resistant Vehicles to Egypt to Combat Terrorism - Embassy