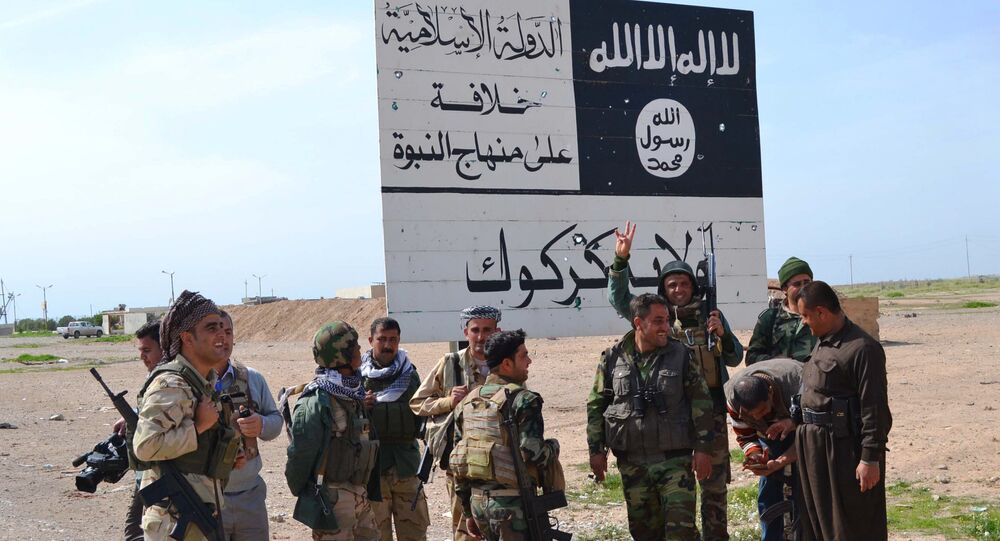 Will 'Water Truce' Between Kurds and Shiites Last After Daesh Defeat?

Internal conflicts and competition for territory between Kurds and Shiites have slowed progress in the fight against Daesh and a RIA Novosti correspondent explored how great the conflict between these religious sects in Iraq is and whether it is possible to resolve it.

In the Turkmen village for Bashir, situated in south of Kirkuk province, its liberation was of major importance after it had been captured by Daesh since 2014.

© REUTERS / Ahmed Saad
Kurds, Iranians, Shiite Troops Unite to Take Back Oil-Rich Kirkuk in Iraq
Bashir is comprised of several ethic and religious groups, however, they were united by a common enemy, Daesh.

As RIA correspondent Dmitry Vinogradov found, the truce between these different groups is one of only necessity. When Daesh is destroyed and the caliphate banished to the ends of the earth, old conflicts could threaten future peace in the region.

The two major groups in question are the Kurdish Peshmerga and Shiite Hashd al-Shaab, separated by both their faith and ethnicity, Sunni-Shia and Kurdish-Arab, respectively.

Long have the Kurds desired autonomy or even a full independence from Iraq to form a Kurdish state, comprised of the oil-rich province of Kirkuk. Their goals have been stunted by the Shiite majority Iraqi government, who has denied them any of their claims.

Baghdad though, is currently experiencing a lasting bought of volatility, with several districts having been taken under control by semi-Shiite militias. Recently, they formed large mobs and charged into the green zone, making it as far as the parliament building where they descended into a violent confrontation with deputies from Kurdistan.

In response, the Kurdish Peshmerga was forced to evacuate their elected officials out of the green zone via helicopters. Now, Kurdish MPs are refusing to return to Baghdad, paralyzing parliament.

The Kurds themselves are not without fault. After they captured Bashir from Daesh, they held gladiatorial style fights between their prisoners, with the audience and even social media users giving their opinion on whether the militants should live or die.

Rein of the ‘Caliphate’

The current state of affairs is what is know as a “water truce,” as the deadly threat of Daesh has compelled these diverse groups to band together.

The sheer amount of groups vying for power in Northern Iraq is growing by the day. As Dmitry headed towards, he was greeted by checkpoints manned by either the Federal Iraqi police, Kurdish Peshmerga, Shiite militia, Iraqi army and so on.

© AP Photo / File
US Intelligence Cites Decline in Daesh Foreign Fighters to Syria, Iraq
On the outskirts of town, Kurdish Peshmerga patrol the area, while the city itself is run by Shiites. Only two kilometers separates them. In the no man’s land between the scorched earth is littered with destroyed buildings and burnt cars. A personal call from the Kurdish General to his Shiite counterpart was necessary to cross the divide.

When Dmitry arrived into Shiite territory, he was treated with great respect, as the forces were Syrian, fighting on the side of Bashar al-Assad and were very grateful for the assistance of Russian bombers.

Before joining the caliphate Bashir was inhabited by Turkmens, Kurds, and Shiites.

Shiites and Turkmen fled the Sunni “caliphate” as Islamists slaughtered all those who did not belong to their version of “pure” Islam. Those who stayed behind were executed. According to Shiite militia estimates, 120-130 people were killed in Bashir.

The group who now control Bashir did little to help locals when Daesh seized the city.

War for Religion and Territory

Iraq is made up of one nation, one language but the Sunnis, who have suffered at the hands of the Shiite majority for the past decade and so when Daesh stormed across the land with their warped ideology, they did little to stop it.

The streets of Bashir quickly emptied after the militants took over, turning the city into a ghost town. There are no more standing buildings, more tunnels exists, dug by Daesh, than any other structure nowadays.

On April 30, a joint operation of Kurdish and Shiite forces began their siege of the city in the early morning. The attack was carried out simultaneously on three sides, from north and east came Kurdish Peshmerga, from south Shiites of Hashd al-Shaab.

© AFP 2021 / AHMAD AL-RUBAYE
Iraq Deploys at Least 20,000 Troops to Fight Daesh in Fallujah
An international coalition supported the assault from air. According to witnesses, the French conducted targeted air strikes while the US preferred carpet bombing.

Nearly 50 militants met their fate on the streets of Bashir including five commanders. Many of their bodies still lie among the ruins of buildings, their rotting flesh putrefying the hot summer air. Some even lay in the open, as the liberators of Bashir are not in a rush to search the corpses of enemies for fear of mines. Twenty-nine militants were taken prisoners.

In a surprising move, the Kurds, after liberating Bashir, turned the city over to their Shiite counterparts. The reason being that Bashir was a Shiite village. If they had stayed in control when the city’s civillians returned, they would be perceived as occupiers and so the commanders make a strategic decision to return the city.

In the coming months, the combined Kurdish and Shiite forces will start to “liberate” more villages and towns that outright supported Daesh in their crusade to establish a caliphate. Whether they can restore peace to the area will remain unknown, but for now, Daesh has been turned and is in full retreat.