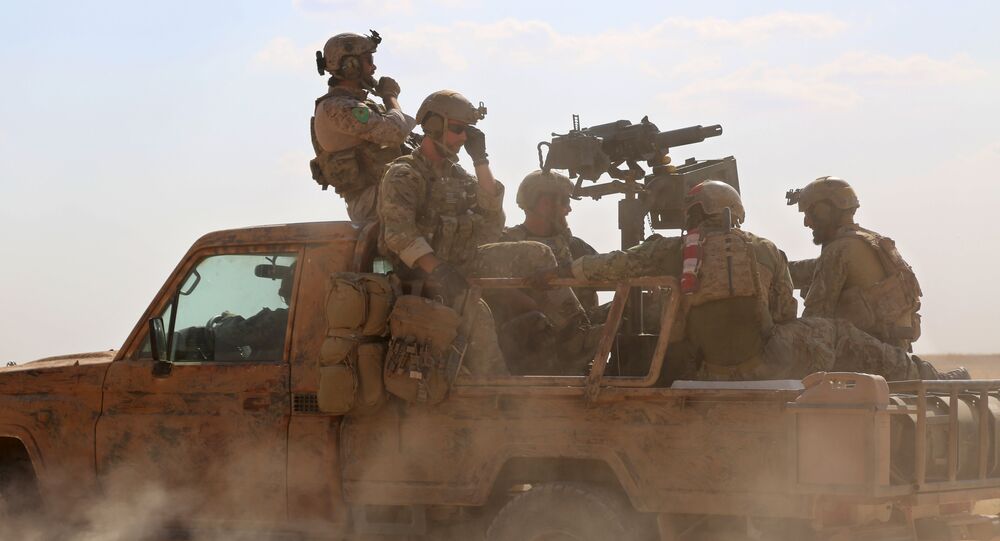 The Pentagon has continuously denied that US Special Forces in Syria equals ‘boots on the ground’, but a new video has emerged of a US soldier standing next to an armored personnel carrier with Kurdish militia YPG spray-painted on it.

© AFP 2021 / DELIL SOULEIMAN
US Wants to Use Possible Raqqa Liberation From Daesh for Political Purposes - Syrian MP
The US support of the YPG Kurdish militia in Syria has been a hot topic primarily because it upsets Washington's other ally Turkey.

Turkey considers the YPG a terrorist organization. The US support of the YPG is not welcomed by Turkey and this rift forms a political dividing line between US and Turkish interests.

Former Pentagon officer Michael Maloof shed some light on this issue in an interview with RT.

“The US is there to advise and assist but they also must protect themselves and provide training to the Kurds to use the equipment. We had a recent case where a Special Forces officer was killed as a result of direct conflict with Daesh. They are engaged in conflict, but their primary role is advising and training,” Maloof said.

“They try to blend in; they will try to wear the uniforms of the folks that they are working with and that is understandable. When you look at the pictures you see the sophistication of some of the equipment that the US forces are wearing, so it leaves no doubt that they are very well equipped.”

The former Pentagon officer stressed that Turkey is watching this military assistance very closely. According to Maloof, in reality it is only the Kurds who are involved on the ground together with the Arabs.

Turkey considers the YPG, People's Protection Units, a terrorist group, but US forces have been seen wearing the badges. Although it may seem like a provocation, Maloof said that it is not necessarily a provocation but it could represent a potential dividing line between US and Turkish interests.

“US interests are to support the ground troops. We purposely haven’t declared the YPG to be terrorists, because they are not, even though there is that affiliation with the PKK [Kurdistan Workers' Party].”

Talking about Erdogan in Turkey, the former officer said that the president has shown his true colors by being very indiscriminate against all Kurds within his own country and that is creating more problems.

“Erdogan is creating his own problems with the Kurds, and I think it’s going to blossom into a full-fledged conflict within Southeast Turkey if that continues,” Maloof said.

Regarding the presence of US Special Forces in Syria, the forces may number far higher than the 300 admitted by the White House, Daniel McAdams wrote for the Ron Paul Institute.

​McAdams also wrote that these forces have no legal authority to operate inside of Syria. “As the US government continues to say that the current Syrian government must be overthrown and Syrian president Assad ‘must go,’ there is no reason to expect that the ‘kill 'em all’ mission statement of this US Special Forces soldier will end once Raqqa is liberated from Daesh control.”

According to the analyst the fact that US troops will participate in the removal of Daesh from Raqqa and “then pack up and go home is extremely unlikely as the original aim in Syria was the removal of Assad.”

G7 Support Investigation Into Reported Use of Chemical Weapons in Syria

Pentagon Denies US Troops Fighting in Syria Amid Release of Photos