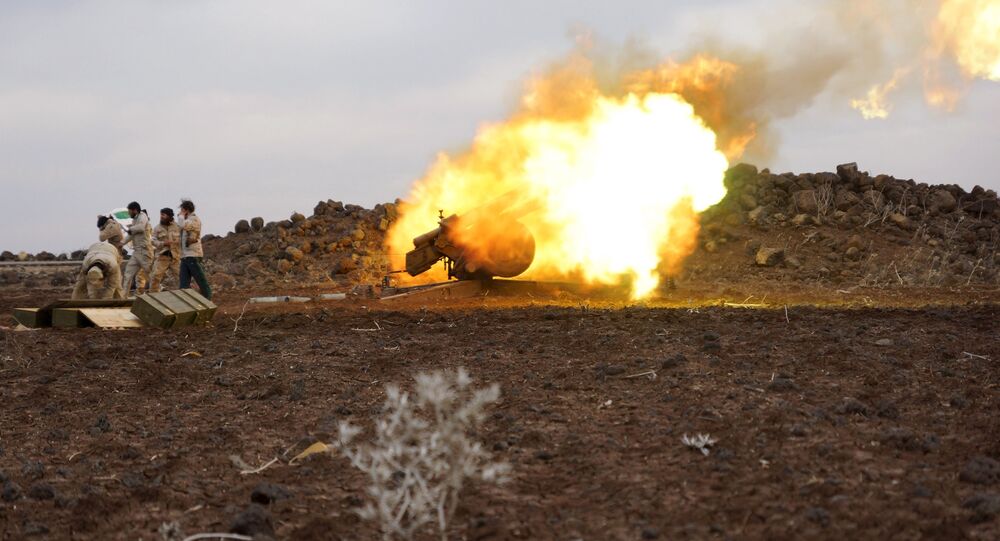 Another four villages near the Turkish-Syrian border have been captured by Daesh terrorists, who continue to fight the Free Syrian Army.

© Sputnik / Mikhail Voskresenskiy
Daesh Advances Near Aleppo Threaten Nearby Refugee Camps - UN Aid Chief
Daesh terrorists have managed to seize another four villages located in the northern Syrian province of Aleppo near the Turkish-Syrian border, in a development that came amid violent clashes between jihadists and the Free Syrian Army, according to Sputnik.

The clashes were followed by a large-scale operation staged by the terrorists, who finally took control of the four villages, including Jarez, Sheikh, and Al-Bel, previously controlled by Free Syrian Army units.

Upon capturing these villages, the terrorists have approached the strategic Syrian city of Azaz, located not far from the Turkish city of Kilis. Currently, the jihadists are deployed within a 4-kilometer radius of Azaz.

Meanwhile, the anti-terrorist coalition's warplanes continued their airstrikes on Daesh positions in the region, with the Turkish military shelling the jihadists' strongholds in border areas.

Earlier this month, legal advisor to the Free Syrian Army Osama Abu Zeid said that relative calm has been observed in Aleppo since the "silent" ceasefire period entered into force there in May.

© Sputnik / Michael Alaeddin
Daesh Terrorists Seize 11 Localities on Syria-Turkey Border in Aleppo Province
The Al-Nusra Front terrorist group had previously shelled Aleppo for over a week, with the Russian reconciliation center at the Hmeymim air facility reporting casualties and injuries among civilians.