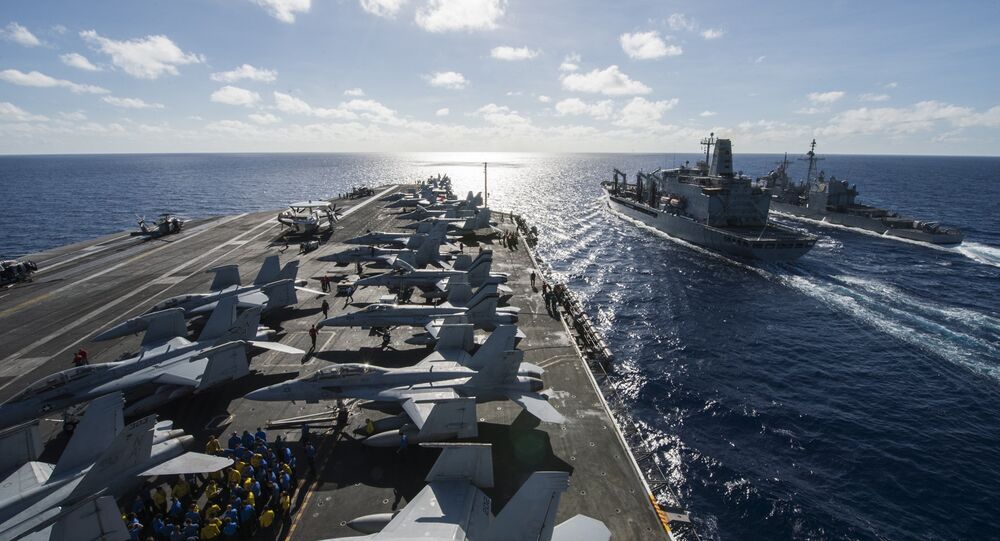 Echo of Iran Nuclear Deal: Iran Vows to Sink US Ships if Threatened

Iran has called the US presence in the Persian Gulf an “absolute evil” and vowed to sink its vessels if “they commit the slightest mistake”; however an Iranian Middle East expert suggests that the tensions in the Persian Gulf are just a pretext and the real root of the standoff between the two lies in the US’ failure in the Iran nuclear deal.

© REUTERS / President.ir
While EU Wants Slice of Iranian Pie, Russia and China Have First Helpings
Tehran has issued yet another loud statement about the US presence in the Persian Gulf.

Gen. Ali Fadavi, the naval commander of Iran’s Islamic Revolutionary Guards, has warned that his forces would sink American warships should they pose the slightest territorial threat to the country.

“Wherever the Americans look in the Persian Gulf, they will see us,” the Rear Admiral said on Islamic Republic of Iran News Network (IRINN) on Monday night.

“They know that if they commit the slightest mistake, we will sink their vessels in the Persian Gulf, the Strait of Hormuz, or the Sea of Oman,” he added.

The naval commander further called the US presence in the Persian Gulf “an absolute evil.”

“Today, there are around 60 foreign military vessels in the Persian Gulf, most of which belong to the US, France and Britain. The vessels are monitored by the IRGC every hour,” said the official.

© AP Photo / Fars News Agency, Mahdi Marizad
US Vows to Continue Operations in Hormuz Straight Despite Iran's Threat to Ban Passage
Fadavi also criticized a recent resolution in the US Congress against Iran’s activity in the Persian Gulf, saying neither the US administration nor other international players are in the position to meddle in this issue.

Earlier this month, Leader of the Islamic Revolution Ayatollah Seyyed Ali Khamenei rebuffed the US government’s demands that Iran withhold from staging military drills in the Persian Gulf, according to a Press TV report.

“The Persian Gulf coast and much of the coasts of the Sea of Oman belong to this powerful nation; therefore we have to be present in this region, [stage] maneuvers and show off our power,” the Leader then said.

Fadavi explained that the Persian Gulf, the Strait of Hormuz and the Sea of Oman are important strategic areas for the whole world and especially for Iran, as it has a longer maritime border than any other coastal state in the region.

The official added that the world’s future depends on the Persian Gulf as it is the center of the world’s energy resources.

Mohammad Ali Mohtadi, Senior Research Fellow at the Institute for Middle East Strategic Studies however told Sputnik Persia that the tensions in the Persian Gulf are just a pretext, the real root of the standoff between the US and Iran lies in the US’s failure in the Iran nuclear deal.

© AFP 2020 / Mahmood Hosseini /TASNIM NEWS
US Should Deny Iran Access to Dollar, Hold Accountable For Missile Tests – House Speaker
And it is of special importance for the Washington to take revenge on Iran at least somewhere.

“We have two very important issues he,” he said.

“Firstly, we have recently observed the escalation of tensions between the US and Iran. The reason is that the US, despite having concluded agreements on Iran’s nuclear program, does not fulfil its obligations: the banking sanctions have still not been lifted even though Tehran is repaying its obligations in full.”

The Middle East analyst explained that Iranian banks are still unable to make international dollar transactions while the Rouhani government is being pressured by its residents.

Criticism of the President and his allies has grown stronger, based on a perception that America has not kept its promises yet at the same time is taking advantage of Tehran.

Secondly, there is another stumbling block – the US’ seizure of Iran’s frozen assets over its alleged involvement in 1983 bombing in Beirut and other attacks.

© AFP 2020 / ATTA KENARE
Iran to Sue US for Allowing the Use of $2 Bln in Frozen Assets for Terrorism Victims
On April 20, the US Supreme Court ruled that nearly $2 billion of Iran’s frozen assets had to be turned over to the American families of the victims of a 1983 bombing in Beirut and other attacks.

The Islamic Republic has denied any role in the attacks.

The money, which belongs to the Central Bank of Iran (CBI), had been blocked under US sanctions before the court ruling.

President Hassan Rouhani said on Tuesday that Iran will sue the US for assets seizure and will soon lodge a complaint against Washington with The Hague International Court of Justice.

“The government will never allow for the money that belongs to the Iranian nation to be so easily gobbled up by the Americans,” he told a large crowd in the southeastern city of Kerman on Tuesday.

Mohammad Ali Mohtadi explained that all the above actions on the part of the US are nothing else but a desire to take revenge on Iran for Washington’s loss in Iran’s nuclear deal. The US is now jumping at any opportunity to discredit Iran in the international arena.

And the US buildup in the Persian Gulf is yet more proof of it: criticizing Iran for its military drills in the region, Washington meanwhile steps up its presence in Bahrain and Qatar.

The US military presence in the region is not a guarantee of security but rather a factor of unrest, the expert finally stated.

Despite Nuclear Deal, US Pressures EU Allies to Isolate Iran

Obama: US, GCC Should Hold Iran Into Account if Tehran Violates Int'l Norms