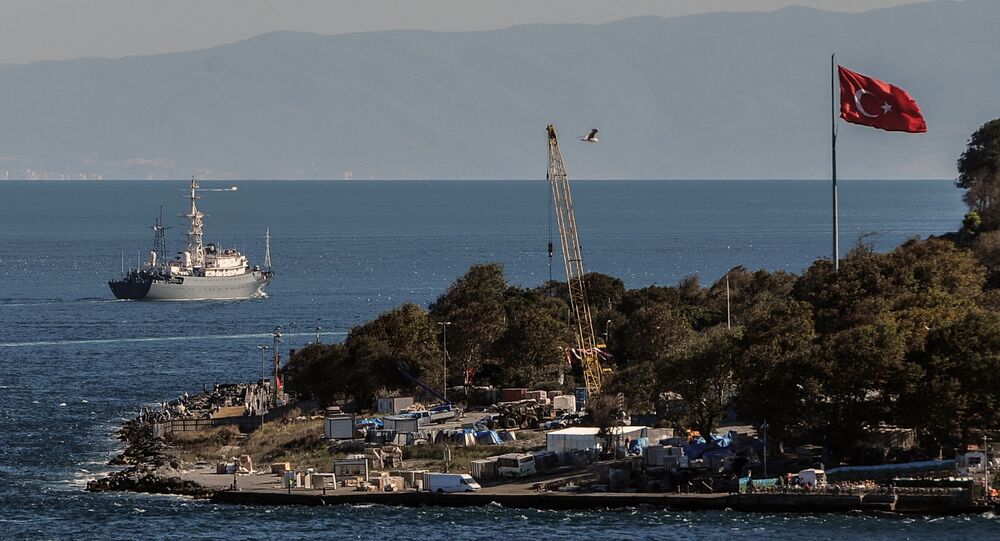 Turkey's Hurriyet Daily News has published a photo of what it described as “two tanks secured under camouflage” on board a Russian crane ship which traversed the Bosphorus on May 8. However, some experts told the newspaper that the vessel had been carrying high speed patrol boats, rather than tanks.

“A Russian military ship traversed Istanbul’s Bosphorus on May 8, with two tanks secured under camouflage on its deck,” the newspaper reported on Sunday.

“Two tanks under camouflage were also seen on the ship’s deck, while some soldiers on board were seen observing the area,” it added.

​The outlet posted a photo featuring some equipment covered with a camouflage.

However, one expert told the newspaper that the ship was likely carrying high speed patrol boats, rather than tanks.

The crane ship, with the bow number KIL-158, entered the strait from the Black Sea at around 8:30 a.m. “under broad security measures” as it was described by the newspaper.

The ship was escorted by a Turkish Coast Guard ship, maritime police and a police helicopter throughout its one-hour passage.

Turkey has recently stepped up its escort of Russian ships.

According to reports, last week two ships carrying cargo for the Russian military in Syria passed through the straits, which connect the Black Sea to the Mediterrannean, accompanied by three Turkish coast guard vessels, an Istanbul police department vessel, and a police helicopter.

Meanwhile, earlier in April, Russia's Project 775 large landing ship, the Aleksandr Otrakovsky, passed through the Bosphorus and the Dardanelles flying the Turkish flag as a token of respect.

Ships often fly so called courtesy flags in foreign waters and Russia is no exception. Russian ships have always adhered to this rule.