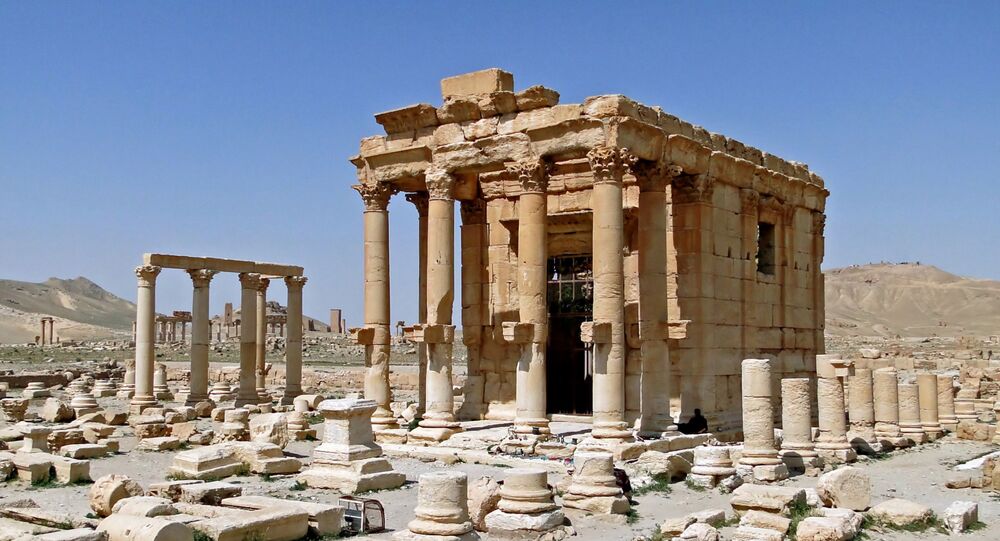 The liberation of the ancient city of Palmyra by Syrian and Russian forces has become arguably one of the most important victories in the war against global terrorism in the last several years. Unfortunately, some Western archeologists have joined their countries' political and media elites in trying to turn the victory into a political sideshow.

© Sputnik / Mikhail Voskresensky
Rising From the Dead: Palmyra a Month After Liberation (PHOTOS)
The victory, Russian online news and analysis journal PolitRussia recalls, "was particularly symbolic because the [Syrian and Russian] military were able to rescue one of the greatest cultural monuments in the world from the [Daesh] barbarians."

Unfortunately, the publication adds, some groups have now attempted to put a damper even on this victory.

Soon after the city was liberated late last month, an odd story appeared in some mainstream media, France's Le Nouvel Observateur citing an appeal by an 'international group of respected archeologists' who urged UNESCO not to "hand Palmyra over to Russia," and not to allow Russian archeologists to be given the right to restore the city unilaterally.

The group, including archeologists Michel al-Maqdisi, Frank Braemer, Michal Gawlikowski, Marc Lebeau and Andreas Schmidt-Colinet, and Shirin International, an organization ostensibly devoted to saving Syria's ancient heritage, launched a petition to "put an end to a situation where Russia [alone] manages the monuments in Palmyra." The archeologists noted that they were troubled by reports that UNESCO supposedly had a special arrangement with Russia concerning the ancient city's restoration.

© REUTERS / Russian Ministry of Defence
Russian Deminers Defuse Over 18,000 Explosive Devices in Palmyra (VIDEO)
The experts explained that "although we know of the recent presence of experts from other countries in Palmyra, [the right] to the restoration of Syrian heritage cannot be appropriated unilaterally by one side; first of all, it must take place as a result of a national consensus [in Syria]. In addition, Palmyra's status as a UNESCO World Heritage Site implies that the international community must be involved in the restoration. This consensus will be the fruit of long process on several fronts – political, social, scientific and technical."

Commenting on the archeologists' appeal, PolitRussia noted that while "caring for humanity's cultural heritage is no doubt laudable, what's unclear is what caused such concern among respected scholars in this case. Russian scholars have no claim to any exclusive role in restoration works."

In fact, the journal added "the first foreign expedition which visited Palmyra after its liberation was Polish. Between April 7-17, archeologists from the University of Warsaw worked in the ancient Roman city. And no one interfered with their work. On the contrary, they arrived at the official invitation of the Syrian Department of Antiquities, and the Russian military was directly or indirectly involved in ensuring their safety."

As for Russian archeologists' participation in the restoration, PolitRussia recalled that there was nothing strange that they too be involved in the work, given that the Russian Hermitage Museum is one of the largest archeological centers of the world, whose staff have unique experience in restoration work, including with antiquities from Palmyra.

Ultimately, the journal suggests, "it's very curious to see this surge in activity on the need to 'preserve' the cultural heritage of the Middle East right now, and to 'protect' it from Russia. Why, previously, had these guardians calmly looked on over the past several years as the region's historical and archeological heritage was savagely destroyed by terrorist groups who have a relationship with the US or its allies?"

© Sputnik / Mikhail Voskresenskiy
'Daring Move': How World Media Cover Russian Orchestra Performance in Palmyra
Western archeologists "merely 'expressed concern' when the Taliban blew up the Buddhas of Bamiyan, burned the letters of the Assyrians in Kandahar and blew up Persian alters in Jalalabad." The Taliban, PolitRussia recalled, has its roots in the Mujahedeen, a collection of Islamist militants fighting the Soviets in Afghanistan throughout the 1980s, and who were supported by the US's ally, the UAE, throughout the 1990s.

At the same time, the journal added, Western commentators watched just as quietly as museums were ransacked and antiquities stolen in Cairo, Egypt during the so-called 'Arab Spring' revolution there.

The same can be said of the cultural heritage of Syria and Iraq, which has been similarly harmed following the rise of Daesh and other jihadist groups. "The weapons and equipment given to the 'moderate opposition', in a mysteriously coincidence, instantly found themselves in the hands of the terrorists," the journal sarcastically noted.

"But now, it is Russia which is the main enemy of Palmyra and of global archeology," PolitRussia sardonically added. In fact, the 'clumsiness' of this propaganda is similar to that of the worst days of the Cold War.

"Someone finds it beneficial to forge a public image of wild Russian barbarians [who are] incapable of any creative work. And all means are good for this purpose – even the use of well-known archeologists. This isn't good…"

"What should we do in this atmosphere of hatred and mistrust?" PolitRussia asks. The main thing, it suggests, "is to think less about what is going on in the minds of Western elites and to do what we consider necessary, without a backward glance toward anyone. As historical experience shows, seeking the approval of the West, in almost any area, comes at a great cost." Maybe, "if the West does not approve, then we are on the right track!" the journal facetiously concludes.