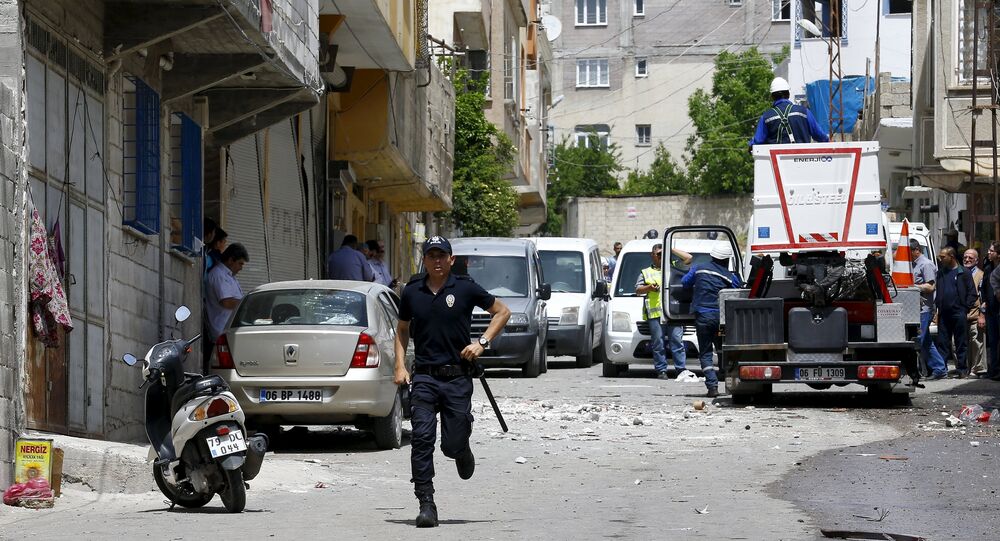 Nasuh Mahruki, the head of AKUT Rescuers Union, spoke to Sputnik in an interview about the ongoing violent attacks on the city of Kilis by Daesh militants.

The war in Syria has gradually expanded into Turkey and a few places such as Kilis have transformed from peaceful charming towns into violent conflict zones where Daesh terrorists continue to fire rockets from Syria.

According to reports about 20 people have been killed and everyday life in the town has come to a standstill as anger against both the government and refugees has begun to erupt.

Meanwhile, the Office of Emergency Management (AFAD) has published a brochure in which the residents of the town have been informed about a number of measures in order to protect against jihadist attacks.

Some of these measures have statements such as this one: ‘hiding in the lowlands to protect one from repeated attacks and moving as fast as possible from the place where the missile has hit.”

The brochure has caused public outrage due to its ineffectiveness with the proposed protection measures.

© AFP 2020 / BULENT KILIC
Turkey’s Kilis Comes Under Fire From Daesh-Controlled Syrian Territory
In an interview with Sputnik Nasuh Mahruki criticized the following measures saying that, “the State should take all necessary measures to ensure the safety of its citizens and stop the attacks, instead of distributing brochures with ridiculous advice.  If it cannot cope with this challenge, the only effective way to save one is to leave the dangerous region by any means possible.”

The head of the union further spoke about how normal life in Kilis has become impossible. “In a healthy, normally functioning society, the state must not allow the occurrence of such a situation, which is directly threatening the lives of its citizens. It must use all of its resources to stop this.”

“The government, meanwhile, is limiting itself to releasing leaflets with such tips as “where to hide better and how fast to run, if you hear the sound of an approaching missile,” Mahruki said.

According to him such actions by Turkey’s government are totally unacceptable as it must find a solution as fast as possible to put an end to rocket attacks on its border towns.