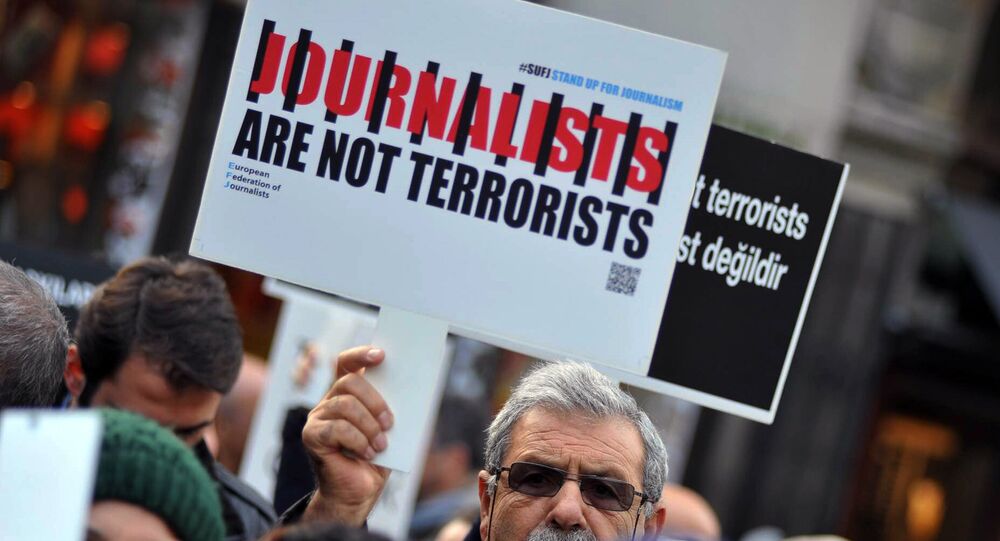 US Concerned Over Detention of Opposition Journalists in Turkey

The United States has expressed concern over the sentencing of two prominent Turkish journalists.

WASHINGTON (Sputnik) – The United States has expressed concern over the sentencing of two prominent Turkish journalists to over five years in prison, for publishing an article on Turkey supplying weaponry to Syrian rebels.

"The United States is concerned by the guilty verdicts issued today in the trial of Cumhuriyet Editor Can Dundar and Ankara Bureau Chief Erdem Gul, who were convicted of leaking state secrets stemming from their journalistic work. We reiterate that the United States supports freedom of expression, and we call on the Turkish authorities to support an independent and unfettered media, which is an essential element of any democratic, open society," the US State Department said in a Friday statement.

Can Dundar and Erdem Gul from the Cumhuriyet opposition newspaper were arrested and placed in pre-trial detention in November 2015 for publishing an incriminating article and footage in the daily on May 29. Their investigation concluded that Turkish National Intelligence Organization (MIT) trucks had carried containers with artillery shells, machine gun rounds and mortar shells to Syrian rebels.

© REUTERS / Murad Sezer
Over the Top? Authorities Charge Turkish Journalists 'With Four Crimes Over One Article'
Following the fourth hearing on the case on Friday, Dundar was sentenced to five years and 10 months in prison and Gul for five years and six months over releasing secret documents.

Earlier in the day, a gunman attempted to assassinate Dundar during a break at the hearing, but the journalist escaped unharmed, while the perpetrator was detained by Turkish police.

Turkey's crackdown on journalists and restrictions on freedom of speech has been condemned by the international community, including the United Nations, the United States, the European Union, Russia and the Reporters Without Borders (RSF) organization.