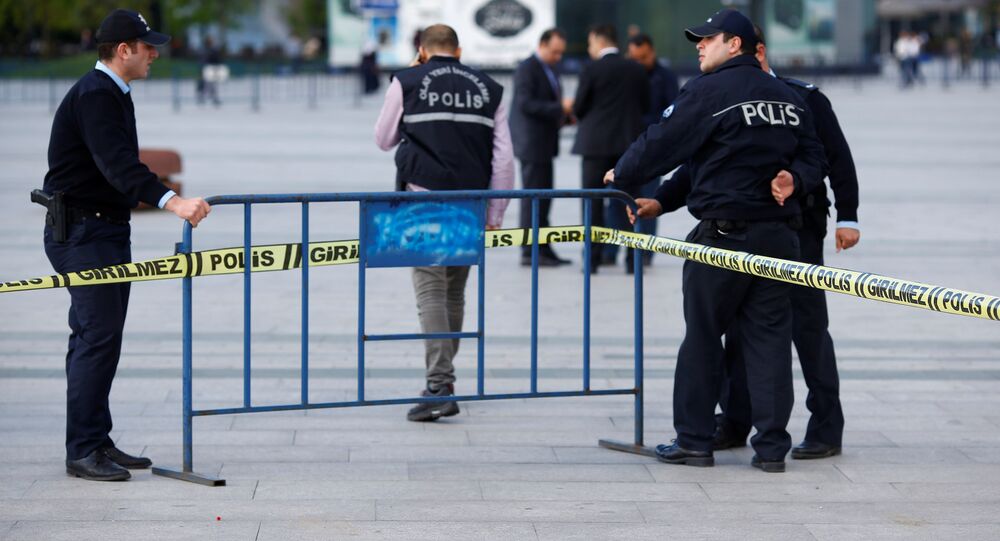 © AP Photo / Vedat Arik, Cumhuriyet
Man Down: Shots Fired at Opposition Journalist in Istanbul's Courthouse (VIDEO)
MOSCOW (Sputnik) – Cumhuriyet editor-in-chief Can Dundar escaped unharmed earlier in the day when a man fired two shots at his legs, calling him a "traitor." The incident took place during a break at the fourth hearing on an espionage case against Dundar and Cumhuriyet's Ankara bureau chief Erdem Gul. A reporter for the NTV broadcaster was wounded in the leg.

The assailant, identified as Murat Sahin, was seen in video footage surrendering calmly to the authorities after the attack, the Hurriyet Daily News reported.

Sahin was reported to have a criminal record for similar armed attacks.

© AP Photo / MENA
Egypt Journalists Vow Strike if Press Restrictions Remain in Place
Dundar and Gul were arrested and placed in pre-trial detention in November 2015 for publishing an incriminating article and footage in the Cumhuriyet on May 29. Their investigation concluded that Turkish National Intelligence Organization (MIT) trucks had carried containers with artillery shells, machine gun rounds and mortar shells to Syrian rebels.

Both journalists face a maximum life sentence for revealing state secrets, but deny their guilt and claim the state violated their rights.

The court later sentenced Dundar to five years and 10 months and Gul to five years for revealing state secrets. They were acquitted on other charges.

Turkey's crackdown on journalists and restrictions on freedom of speech was previously criticized by the international community, including the United Nations, the United States, the European Union, Russia and the Reporters Without Borders (RSF) organization.

Lavrov Calls for Consolidation of Efforts to Ensure Journalists' Safety