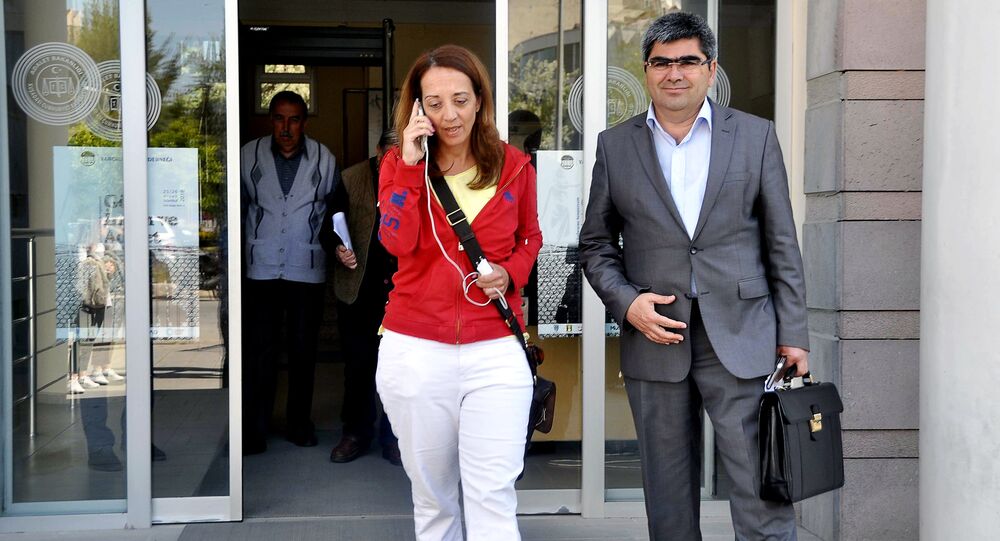 Dutch journalist Ebru Umar, who was detained last Saturday for criticizing Turkish President Recep Tayyip Erdogan, told Sputnik she can’t grasp the absurdity of the whole situation that’s happening to her in Turkey.

"Everything that's happening to me seems like a very bad joke," Umar told Sputnik.

Last Saturday, Turkish police arrived at Umar's home in the town of Kusadasi and arrested her for writing a critical review of Erdogan's policies. After spending some time at a police station, Umar was released under the condition of travel restriction.

© REUTERS / Umit Bektas
Reporter for Dutch Press Detained in Turkey For Anti-Erdogan Tweet
In other words, Umar, a Dutch citizen of Turkish descent, couldn't leave the country. Right now the journalist is waiting for papers from the newspaper she works for, Dutch Metro Daily, and plans to appeal the decision of a Turkish court that put the travel restriction on her.

"The definition of the word "insult" depends on the cultural envrionment in which it's viewed. That's why, honestly, I don't understand what I'm even accused of," Umar told Sputnik.

Umar added that Turkey doesn't have freedom of speech and she isn't the first journalist who was detained for speaking up against the tyranny of Erdogan.

"Many journalists in Turkey are arrested, the number of court proceedings against members of the press is around 2,000. It looks like some sort of a bad joke! Turkey doesn't have freedom of the press," Umar said.

The Dutch journalist also criticized other European countries, which despite numerous violations of basic human rights in Turkey, conitnue to have diplomatic relations with Ankara, purely for their own interests.

On Monday, another foreign journalist, David Lepeska, was denied entry to Turkey and without any explanation was forced to leave the country immediately. Lepeska, a US journalist who wrote for the Guardian, Al Jazeera and Foreign Affairs, was stopped at the Ataturk Airport in Istanbul because his visa had an entry ban.

© AP Photo / Anonymous
Without Explanation, American Journalist Denied Entry Into Turkey
"I've been given no reason for the entry ban nor confirmation that this status is lasting or permanent," Lepeska said.

Looks like the Erdogan's government is waging war against journalists. Ankara has closed a number of media outlets, including Sputnik's own Turkish bureau. Sputnik Turkey's editor-in-chief, Tural Kerimov, was denied entry while his journalist credentials were stripped from him.

Erdogan's crackdown on media knows no borders and even extends beyond Turkey. Ankara pushed to punish a German political satirist, Jans Bohmermann, for insulting the Turkish president.

Following the broadcast, in response to an official request from Turkey, Merkel said she would allow Erdogan to pursue a lawsuit in Germany against the satirist under a Wilhelmine-era law, which prohibits citizens from insulting foreign leaders.