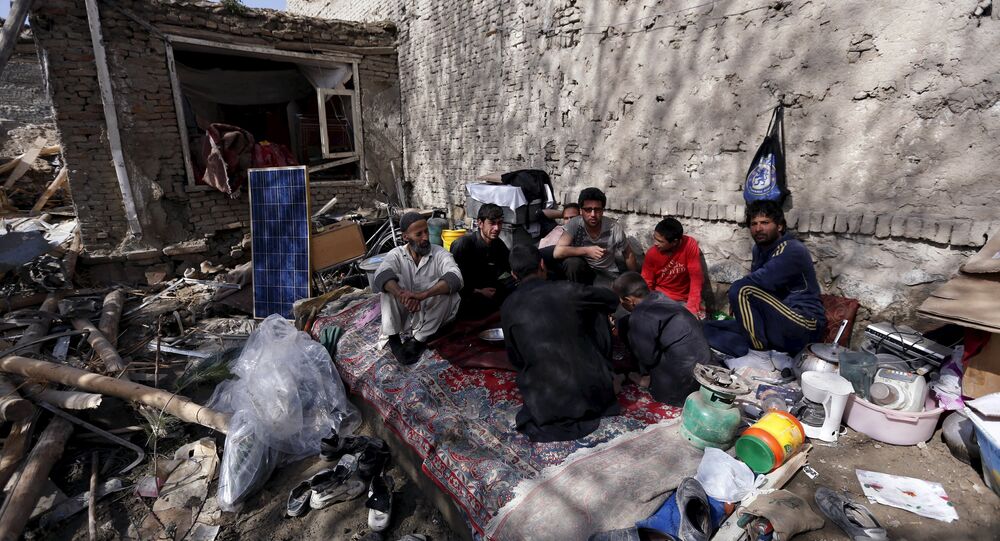 Afghanistan is in the worst humanitarian crisis since the start of operations in 2001 after American and British forces pulled out 18 months ago, the outgoing head of the International Committee of the Red Cross (ICRC) has said.

The withdrawal of British and US troops in 2013 and the subsequent drawdown of NATO have meant that the country is now reaching further depths of despair. An economy that is in tatters, high unemployment rates and increased fighting from the Taliban has led to havoc.

For over 30 years, people in #Afghanistan have lived in a state of near-constant violence: https://t.co/t2kVVgwoUp pic.twitter.com/gIcn6vtaRr

The situation in Afghanistan has not just been noticed by the ICRC but also other leading experts in the arena.

Charles Davy, Managing Director of AfghanAid, said in an exclusive interview with Sputnik:

"There's been a gradual decline, beginning in 2013, as troop withdrawal began the conflict has continued to increase. The economy has declined because of all the military operations…"

"There are 400,000 people entering the job market and no opportunities. This creates a perfect storm; and then to have added the increase of the Taliban and introduction of Daesh into country. Now look at the natural disasters… It is the second biggest natural disaster country in the world, where landslides [occur], not on a massive scale, but regularly."

Mr Davys comments were echoed by Daoud Sultanzoy, former Afghan MP and TV anchor, who was not impressed with the report by the ICRC and who told Sputnik that:

"The irony of these reports by an international organization, is that they are not sufficient. These trends existed for several years; they should talk about the new trends that led us to where we are now."

"The trends are the withdrawal of troops — that is a red flag. This is not rocket science, thousands of troops have been here and this coupled with other things have created a bubble economy," Mr Sultanzoy told Sputnik.

Both Mr Davy and Mr Sultanzoy believe the withdrawal of troops from the country is one of the factors that has led to its failure to recover.

However, both experts also think that this is not the only reason.

"The corruption by local, national and international community is important as well. The black economy related to drugs, the government before this current one, left chaos in various regions of the country… The people who made money were merchants not businesses, so they did not reinvest their money back into country.

"The Afghan military had a big part to play as well — it's rather traditional… Also look at the number of unemployed people. Failure to provide jobs leads to more people joining the Taliban. Also lack of hope, failure to build a justice system and structures has led to the further collapse of the country," said Mr Davy.

However there is hope, Afghanistan is not irreparable.

"No it is reparable, it's supportable. If we could clarify the situation and bring people around the same table and its possible to create change," Davy said.

"The Taliban requires support. If we could get corruption under control it would be less attractive to support them. It will take international efforts, British support is growing. If we don't do something to help the community and government it will all be for nothing.

"The international government has ADHD — distracted by Libya, Syria etc. We should be able to pay attention to all the issues. Afghanistan is not a small problem; it can be fixed but requires determination and cohesion.

"The people in this country need to bring confidence back to the nation and instill hope back into the lives of people. The government is for them, not for anyone else. Not just by words but by actions. The international community need to finish the half-done job they left behind."