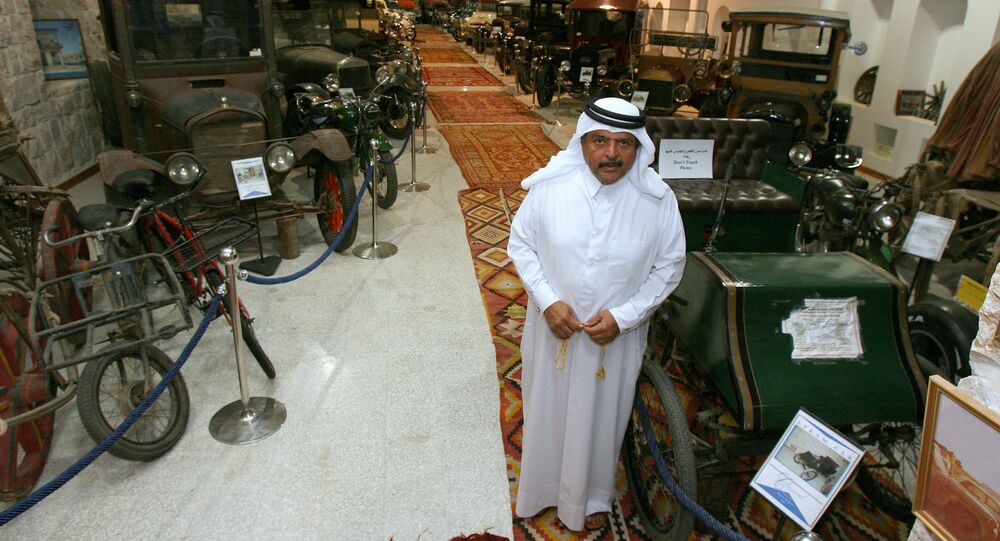 Building Houses on Sand: How a Qatar Sheikh Earned $2 Bln Without Drilling

Qatar's Sheikh Faisal Bin Qassim Al Thani, the country's only Forbes 1,000-listed billionaire, surprisingly managed to earn his wealth by doing business in the construction sector rather than in oil and gas, according to the Russian news website RBK.

© Photo : Miramax
Qatar Broadcaster Buys US Miramax Film Studio
With a current net worth which totals a whopping 2.2 billion dollars, Qatar's Sheikh Faisal Bin Qassim Al Thani is known internationally as a person who has managed to capitalize on his country's construction boom rather than revenues from the oil and gas sector, the Russian news website RBK reported.

Sheikh Faisal was born in 1948 and at the age of 16, he started selling car parts in Doha before establishing his own company, Gettco Trading, later in 1964.

One year on, he launched another project, a transport company called Gettco Cargo, which provided shipping-related logistical services.

"When I started my business, Qatar could communicate with the outside world mainly through sea traveling," the 68-year said in an interview with Bloomberg, referring to this part of his biography.

The Sheikh never mentioned how he obtained his start-up capital, a 1987 reference book on Qatari transport companies claimed that this sum amounted to at least 1.78 million dollars.

Oil and gas reserves were discovered in Qatar in 1950, and the extractive industry came to replace fishing as the backbone of the country's economy. The influx of oil money into Qatar led to the rapid development of infrastructure and trade.

© AP Photo / Michael Probst
Qatar Awarded FIFA 2022 Tournament Due to French Pressure, Not Bidding
In 1971, Qatar was declared a fully independent country, in what coincided with a global oil crisis. OPEC had instigated an embargo against the West and oil prices jumped several-fold throughout the world.

Although Sheikh Faisal never had a direct relationship to the extractive industry, he successfully benefited from implications of the energy boom at the time. Revenue from the oil and gas industry gradually found its way to the growing class of consumers through public infrastructure projects and subsidies to attract foreign investment and trade development, according to RBK.

In the 1970s, the Sheikh established Linx Qatar, a company dealing with construction materials, something that was followed by his founding a spate of companies producing paints and varnishes, as well as a network of car washes and filling stations.

Like a number of other construction companies in the Faisal portfolio, Linx Qatar first and foremost produced cement and concrete, which were in great demand in his country after then- Emir Hamad bin Khalifa announced the construction of a new modern Qatari capital.

"When the economy was booming, there were small companies with limited resources. The companies that were able to expand their resources and capabilities as well as hire more people [could] keep up with the growth of the economy," Sheikh Faisal said in an interview with the website businessyear.com

The 1980s saw world oil prices plummet in a development that finally gave place to a new construction boom in the Middle East in the early 2000s.Needless to say, Sheikh Faisal was poised and ready for it, given that most of his construction companies were created in the late 1990s, RBK said.

Separately, Al Faisal Holding includes Aamal diversified corporation, established by Sheikh Faisal in January 2001 as another private holding company.
Aamal covers a total of four main fields, such as construction, property management, wholesale and retail trade, as well as numerous services related, for example, to tourism and medicine.  60 percent of Aamal is owned by Al Faisal Holding, with the rest traded on the Qatar Stock Exchange.

If the economic environment remains favorable, Sheikh Faisal's 2.2-billion-dollar net worth is almost certain to increase, RBK said, citing the Football World Cup, due in Qatar in 2022. In the next 15 years, up to 45 billion dollars in the form of state subsidies are expected to be allocated for the construction of new hotels and the development of tourist services in Qatar, RBK concluded.