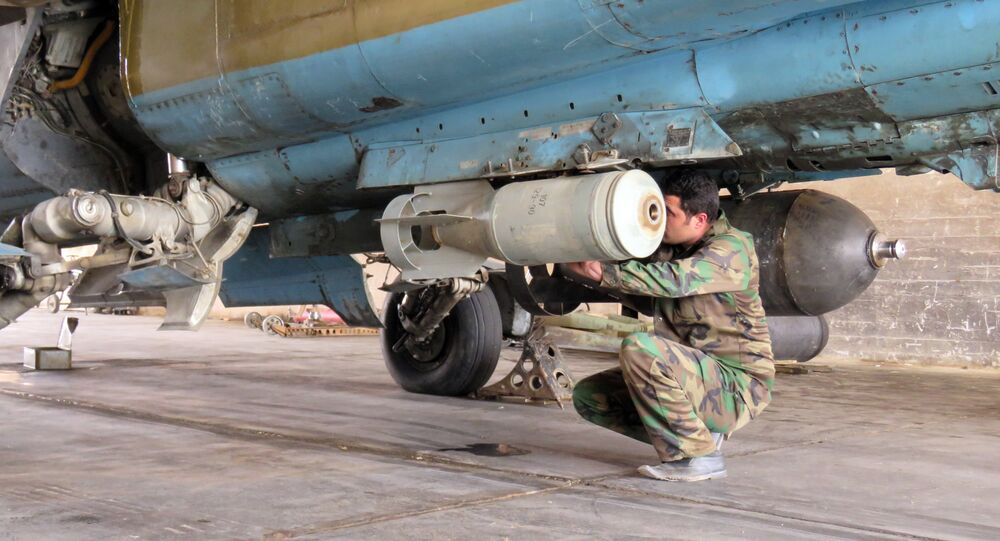 Russian and Syrian Air Forces have reportedly carried out several coordinated air strikes on Daesh near a strategic military airbase in the northeastern province of Raqqa, west of the de facto capital of the self-proclaimed caliphate.

Ministry of defence of the Russian Federation
Kremlin: Russian Aerospace Forces Will Continue Supporting Syrian Army Despite Pullout
Syrian and Russian warplanes conducted a spate of coordinated air strikes against Daesh (ISIL/ISIS) near Tabqa Air Base which resulted in the destruction of many of the terrorists’ military and logistics vehicles, according to the Iranian news agency FARS.

The attacks have impaired Daesh’s ability to supply its forces near the recently-liberated city of Palmyra with arms, medical equipment and food, FARS reported.

The airstrikes came shortly after sources said that scores of Daesh terrorists had been killed and many more wounded after the pro-government battalions of Raqqa province's tribal forces clashed with the terrorists in the area.

"The tribal forces and the Syrian Army have advanced against the ISIL terrorists in Qabaqeb and al-Tim oil well and are pushing towards the city of Raqqa," the sources said.

Meanwhile, fighting has erupted between a militant group and Daesh near Damascus, where Jaysh al-Islam (the Brigade of Islam) stormed Daesh positions to the northeast of the capital, according to the sources, which cited a heavy death toll from the fighting.

© REUTERS / SANA/Handout
Palmyra Liberation: Syrian Army Officer Reveals Details of Operation (VIDEO)
Syria has been mired in a civil war since 2011, with forces loyal to the country's President Bashar Assad fighting a number of opposition factions and extremist groups, including Daesh and the Al-Nusra Front, which have been blacklisted as terrorist organizations by many countries, including Russia.

© Sputnik / Michael Alaeddin
Finding Terrorist Foxholes: Syrian Army 'Smokes Out' Daesh in Deir ez-Zor
However, on March 14 Russian President Vladimir Putin announced that the Russian Aerospace Forces unit had fulfilled its mission in Syria and that its withdrawal would begin the following day. Nonetheless, Russian air power was used by Assad's forces in the liberation of the ancient city of Palmyra.