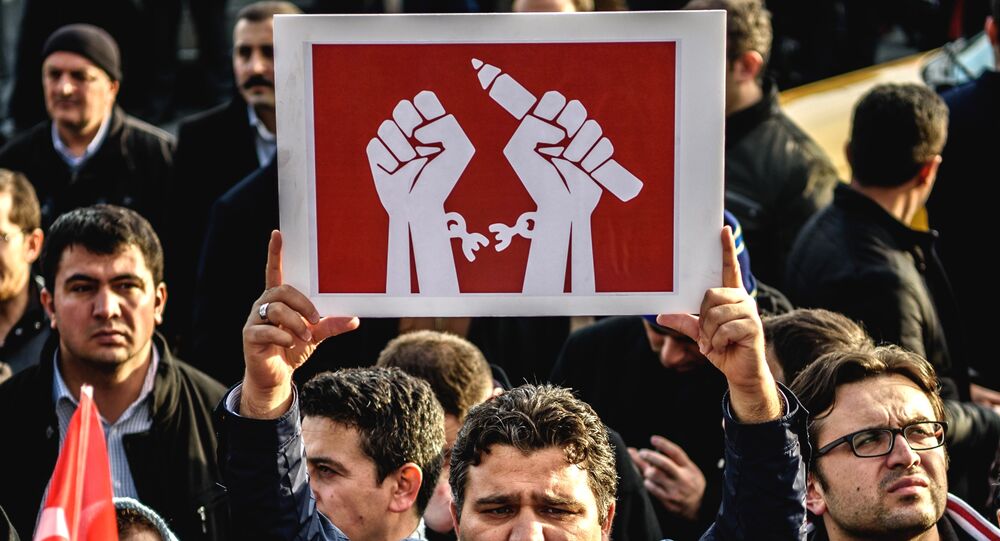 Friday's news that Sputnik's website has been blocked throughout Turkey, without apparent warning or explanation, has reignited questions concerning the country's controversial record on press freedom.

Turkey ranked at 149 out of 180 in last year's Reporters Without Borders 'World Freedom Index', and faces accusations that around 30 journalists are currently imprisoned by the Turkish authorities.

Speaking to Sputnik from Istanbul Friday, Andrew Gardner of Amnesty International said that the situation regarding press freedom in Turkey was "bad, and getting rapidly worse".

"Clearly, the situation for internet freedom, for internet censorship in Turkey is unacceptable.  It fails to meet international human rights standards, and it's really a way for the authorities to target independent media," Gardner told Sputnik.

"Turkey has never been able to meet international human rights standards, in particular in terms of press freedom and the right to freedom of expression for its citizens generally," he added.

Back in 2014, new legislation was introduced which granted Turkish authorities the power to take down websites for "privacy violations" in lieu of court decisions, something which Amnesty International fears is being exploited as a means to target dissenting opinions online, and "limit the right to freedom of expression."

The Turkish Government has been criticized on a number of occasions by Amnesty International regarding press freedom, not only over apparent censorship, but also unwarranted arrests — such as that of 3 journalists working for Vice, who were arrested last year whilst filming confrontations between Police and members of the PKK.

#dundar "There will be a decision wether #Turkey is a democratic country or not.This is a very special crossroad"https://t.co/yohiNihpnQ

Reporters Without Borders have also expressed concern over press freedoms in Turkey — specifically, regarding the trial of two well-known Turkish journalists Can Dündar and Erdem Gül.

"Reporter Without Border are following the situation in Turkey very closely," they said.

Dündar and Gül face the possibility of multiple life sentences for publishing a story suggesting that Turkey was delivering arms to Syrian Islamist rebels, this prompted a criminal complaint from President Recep Tayyip Erdogan who accused the journalists of trying to undermine Turkey's global standing.

Despite widespread criticism from free press advocates and human rights organizations, the Turkish Government insists that journalism within its borders is amongst the most free in the world.

Sputnik awaits confirmation as to whether the block on its news service will be lifted, although at this point such information remains difficult to establish.

Equally uncertain, are the exact reasons for the decision, which have thus far only been explained as "administrative measures".

Earlier, both the Russian Foreign Affairs Ministry and the OSCE expressed strong condemnation of Turkey's actions.

Foreign Affairs Committe Senator Vladimir Dzhabarov said that he believes blocking Sputnik's website was "an attempt to draw us [Russia] into a political dialogue," however that Turkey was going about it in the wrong way.

Dunja Mijatovic, an OSCE representative had also said in a statement, that Turkey's decision "is only the latest in a series of issues" regarding freedom of expression on the Internet, which the OSCE has expressed concern over for a number of years.

Europe's Message to Turkey: No Media Freedom, No EU Accession