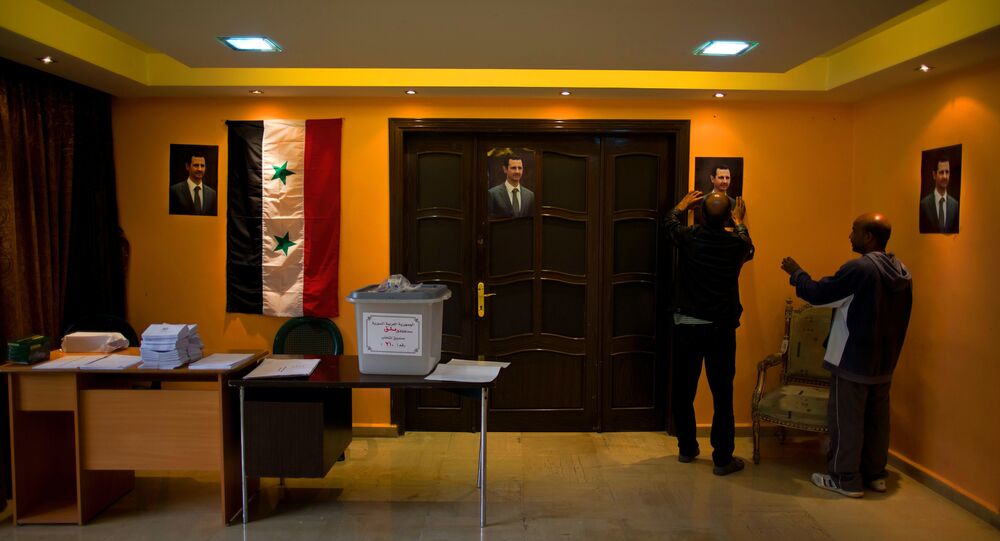 Legislative elections in the Syrian Arab Republic are scheduled to be held on Wednesday against the backdrop of a generally holding ceasefire in the country and peace talks between government and opposition.

MOSCOW (Sputnik) – Syrian President Bashar Assad issued Decree No.63 on February 22 designating April 13 as the date for the vote to the unicameral legislature. The announcement came minutes after Russia and the United States negotiated the truce which took effect five days later and has been described as largely observed despite violations.

According to Shaar, the Syrians will be able to cast their votes at more than 7,000 ballot stations across the country. Polling stations open at 7 a.m. local time (04:00 GMT), the official said.

He added that the HJCE would not hinder the international observers to monitor the upcoming parliamentary elections if the Syrian Foreign Ministry approved their activities, like the ministry of information approved multiple international media to cover the elections.

On March 30, Assad told Sputnik he was not expecting major changes in the Syrian parliament following the elections, but reaffirmed that the vote would confirm Syria’s existence as a state despite the presence of terrorist groups.

The large number of candidates in the electoral process demonstrated strong support and desire among Syrians to strengthen the government’s legitimacy, he stressed.

© REUTERS / Denis Balibouse
De Mistura to Meet With HNC Delegation on Wednesday Afternoon in Geneva
Ibrahim Khodr Salem, governor of the western province of Latakia, told Sputnik on Monday his region was prepared to hold the elections with 990 ballot boxes transferred to the polling stations and free public transport for voters.

On Tuesday, Russian lawmaker Sergei Gavrilov relayed the general approval among local religious leaders for the poll, having met with the grand mufti, the head of the Armenian apostolic church and the head of the Greek Orthodox Church in Syria as part of a Russian parliamentary delegation.

The latest elections to the Syrian legislature were held in the country in May 2012 with 51-percent voter turnout, or 5 million people who cast their vote, according to the Syrian election committee.

Some 3,500 Candidates Running for 250 Seats in Syrian Parliament