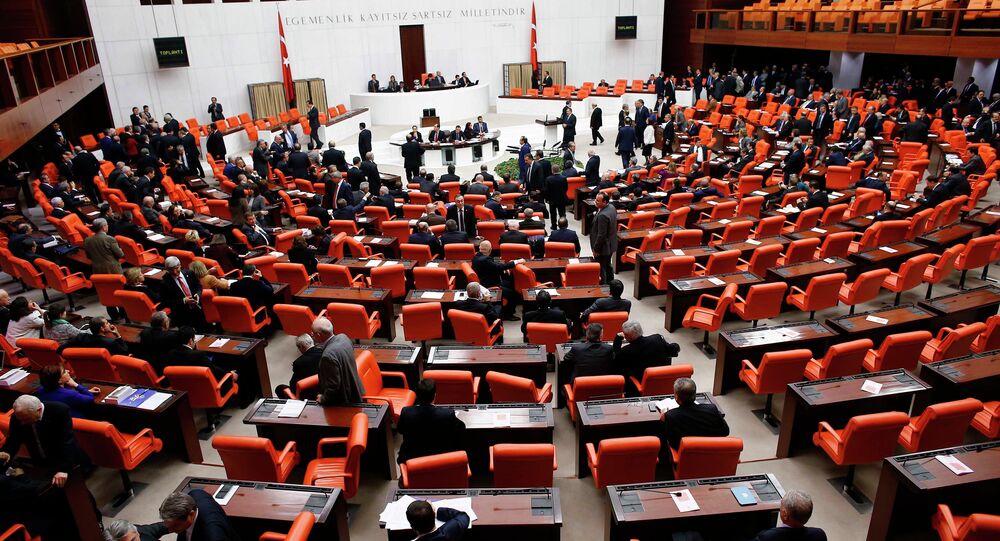 As the Turkish military crackdown on Kurdish insurgents in the southeast of the country met with an opposition from the parliament’s pro-Kurdish People's Democratic Party (HDP), the state government has pushed through an amendment stripping deputies of their immunity from prosecution.

A draft proposal to remove the legislative immunity of lawmakers was presented to parliament on Tuesday, according to officials from the ruling Justice and Development Party (AKP), as cited by Reuters.

© AFP 2021 / Yasin Bulbul/Presidential Press Service
Turkey's Terrorism Blame Game is 'A Recipe for Civil War'
Last week AKP initiated a collection of signatures in favor of an amendment to the Constitution’s Article 83 that reads “a deputy who is alleged to have committed an offence before or after election shall not be detained, interrogated, arrested or tried unless the General Assembly decides otherwise.” By Tuesday, all the 316 members of AKP in parliament had signed the proposal.

Prime Minister Ahmet Davutoğlu claimed that the move is aimed at “so-called lawmakers who lend support to terror and terrorists,” apparently referring to HDP members.

“Everything will come into sight very clearly. It will be shown who is afraid of lifting of their immunities and who is not,” Hurriyet Daily cited Davutoğlu as saying on April 12. “It will be revealed who is sheltering the deputies that are supporting terrorists in this parliament.”

© AFP 2021 / DELIL SOULEIMAN
Erdogan Tries to 'Prevent Kurds From Participating in Syria Peace Talks'
Turkish president Recip Tayyip Erdogan has long sought a chance to persecute HDP members, accusing them of working in favor of the Kurdistan Workers Party (PKK). The organization is viewed by authorities of Turkey and some other states as a terrorist group.

The criticism of the state military offensive by HDP has also caused a spike in Turkish nationalism across the country, helping to accelerate a legal process on the removal of immunities.

The draft will provide state leadership with the grounds to prosecute politicians it deems inconvenient.

"Turkey is conducting its largest and most comprehensive fight ever against terror, while some lawmakers made statements giving support to terrorism before or after being elected, some gave de facto support and help and some lawmakers called for violence, which created great public disgust," the draft reads.

The armed conflict between the Turkish government and PKK began in 1984 and, to date, has claimed the lives of some 40,000 people. The standoff has lately escalated, beginning summer 2015.