Why Jaysh Al-Islam Rebels' Participation in Syria Talks is 'Sabotage'

The Jaysh al-Islam militant group should be excluded from the Syrian peace talks because a group that uses chemical weapons should not be part of the negotiations, former CIA and State Department official Larry Johnson told RT. 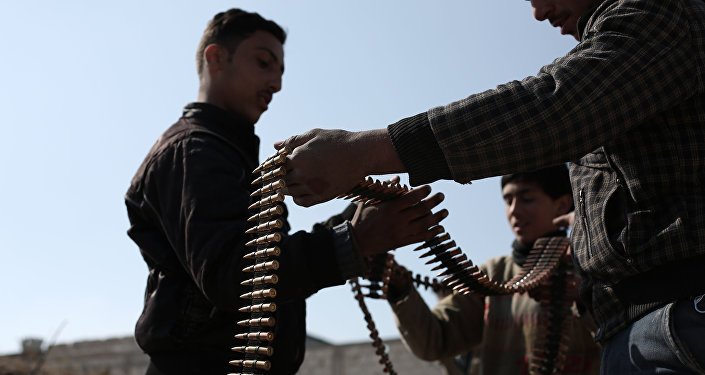 Later, Jaysh al-Islam admitted to using "forbidden" weapons in clashes with the YPG. The militant group also apologized, saying that some of its field commanders used "unauthorized" weapons in the confrontation.

According to Johnson, the fact that Jaysh al-Islam used chemical weapons is not surprising. It has long been known that the key elements of the radical Islamists – particularly Daesh and the al-Nusra Front – have specialists trained in developing chemical weapons.

Nevertheless, it is hard to where the militants are getting their weapons from, he added. However, it is known that the primary sources of the weapons are coming from "rat lines that originate with Saudi Arabia and Qatar."

"Turkey is facilitating the delivery of these weapons. So, these countries have played an important role in arming these groups," he said.

Those countries have intensified their support, including with chemical weapons, to the militants because they want to reduce Iran’s growing influence in the region, Johnson added.

Furthermore, Jaysh al-Islam now has a seat at the negotiating table in the Syrian peace talks. According to Johnson, this situation is unacceptable.

"It should eliminate them from the process. You cannot allow a group that is waging active chemical warfare to sit at the table and be treated as if they are civilized, because this is uncivilized conduct," he said.

Ali Rizk, expert on Middle East affairs, assumed that the chemical attack in Aleppo may be an "attempt to sabotage peace talks in Geneva."

There has been a disagreement during the talks about the future of Syrian President Bashar Assad. While the government delegation opposes the precondition that Assad steps down, the opposing groups insist on his resignation.

According to the analyst, Jaysh al-Islam’s attack could be an attempt to fuel escalation in Syria and undermine the ceasefire.

"Jaysh Al-Islam should be in the terrorist list. The most important point [is] who supplied them [with] chemical weapons? And why are [they] using [it] against the Kurds? I think all organizations with the same mentality of Al-Qaeda should be in terrorist list of UN SC," PYD co-chair Saleh Muslim told Sputnik.

The Jaysh al-Islam opposition group is designated as a terrorist organization in Syria and Russia. Its leader, Mohammed Alloush, was appointed as chief negotiator for the Saudi-formed opposition delegation at the Syrian proximity talks in Geneva that were suspended last week.