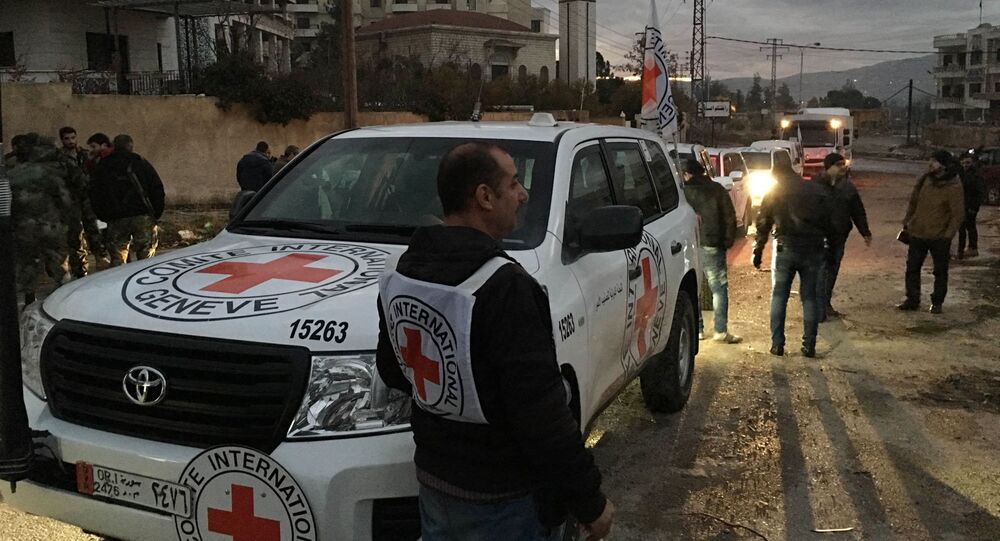 According to an IFRC communications officer, International Federation of Red Cross and Red Crescent Societies is currently unable to give official confirmation on reports of alleged chlorine used in an attack on the Syrian province of Aleppo.

© Sputnik / Michael Alaeddin
Islamist Terrorists Use Chlorine in Attack on Syria's Aleppo
MOSCOW (Sputnik) – The International Federation of Red Cross and Red Crescent Societies (IFRC) is currently unable to give official confirmation on reports of alleged chlorine used in an attack on the Syrian province of Aleppo, an IFRC communications officer told Sputnik on Friday.

Earlier in the day, a doctor from a Red Crescent hospital in Aleppo stated that victims of a chemical attack carried out in the south of Syria’s Aleppo province show all signs of chlorine poisoning.

"I don't have any information on that," the communications officer said answering a question whether IFRC is ready to confirm the case.

A spokesman for Syrian Kurds on Thursday told Sputnik that some cases of gas poisoning had been registered among the civilian population and Kurdish militias following the Wednesday attack on Aleppo.

A Red Crescent doctor, in a video whose transcript was obtained by Sputnik, alleged that at least four people have been admitted with similar cases of asphyxiation.

The doctor, speaking in Arabic, confessed feeling dizziness "as if I’m unconscious."

The purported use of chlorine came amid Nusra Front and affiliated militants attacked the Kurdish People's Protection Units (YPG) in Aleppo this week. The Jaish al-Islam group, part of a ceasefire agreement with the Syrian government, said in a statement its field commander deployed weapons "he was not authorized to use."