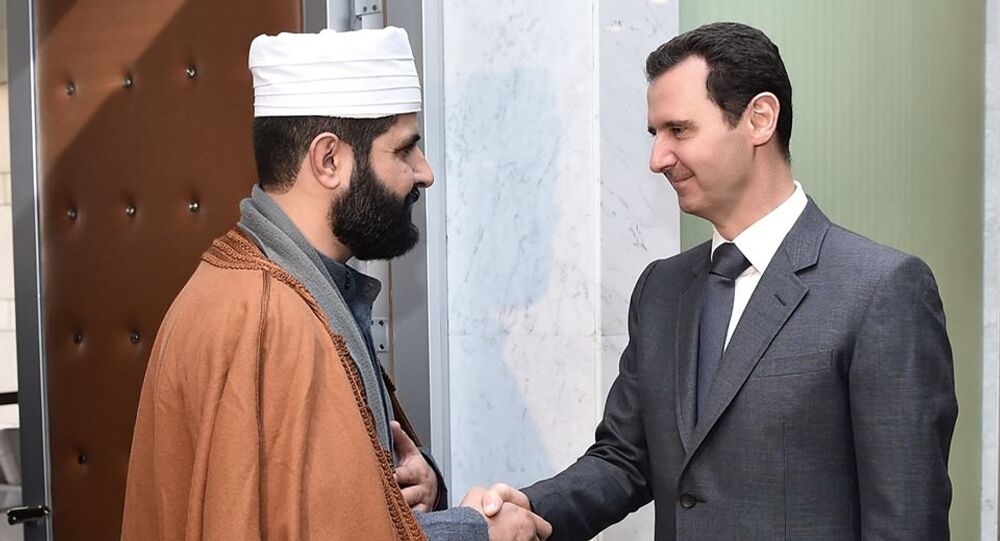 On Sunday, the BBC ran a story about a 'secret document' which claimed that Syrian Alawite leaders were looking to 'distance themselves' from President Bashar Assad. Speaking to Sputnik, Akhmed Bilal, a representative of the Syrian Alawite clergy, said that the BBC's story is false, and a part of the campaign of information warfare against Syria.

The original story, published over the weekend, pointed to a mysterious eight-page document "obtained by the BBC," claiming that Alawite clergy leaders were looking to "distance themselves from Assad," and "outlin[ing] what kind of future they wish for the country after five years of civil war."

© AFP 2020 / LOUAI BESHARA
Assad Wants to Go Down in History as Man Who Preserved Syria
The significance of the document, BBC reported, lay in the fact that the Alawites, including Assad and most of his family, had "dominated Syria's government and security services…for more than four decades." The break with the government, therefore, was thus characterized as "cut[ting] the link or 'umbilical cord' between the Alawites and the Assad regime."

Jumping on the BBC story, Arab media including Al-Jazeera spread it across the Arab world, citing British sources, without seeing the original of the document on which the BBC report was based.

Seeking to find out whether there was any truth in the rumors about Alawite community and religious leaders' shifting political affiliations, Sputnik Arabic spoke to Sheikh Ahmad Bilal, an official representative of the clergy of Syrian Alawites, and director of the Syrian Institute of Theology.

To begin with, Bilal suggested, there could be no secret document on the Alawites' rejection of Assad. "None of our scholars or sheikhs have spoken of any renunciation. Our country has united within it all religious denominations, and Bashar Assad is a symbol of Arab resistance [to imperialism and Zionism]."

© REUTERS / SANA/Handout
Syria's Balkanization: Kerry's Plan B Originates in 1982 Israeli Initiative
All adherents to the Alawite faith, Bilal added, must call for an immediate halt to the publishing of such unfounded news stories, adding that those who might spread such insinuations "should apologize immediately for spreading lies."

"We are looking at this as another failed attempt in their [Syria's enemies' ed.] plotting against our country. Once again they try to divide our country. After all, Salih al-Ali [prominent Syrian Alawite leader] was once offered an Alawite state. But nothing came of it, because Damascus for us comes before Latakia" (the latter is the historic home region of the Alawites).

"We are one country, and have common blood. Let them first prove that such a document exists. This is just another attack in the information warfare being waged against Syria," Bilal concluded.

In the postscript to the interview, Sputnik Arabic emphasized that in order for the Alawite clergy to denounce any one person, group of persons, or organization, the clergy must first hold a conciliar meeting and issue an official (i.e. not a secret) document notifying all representatives of the confession via the responsible religious leaders of their decision.