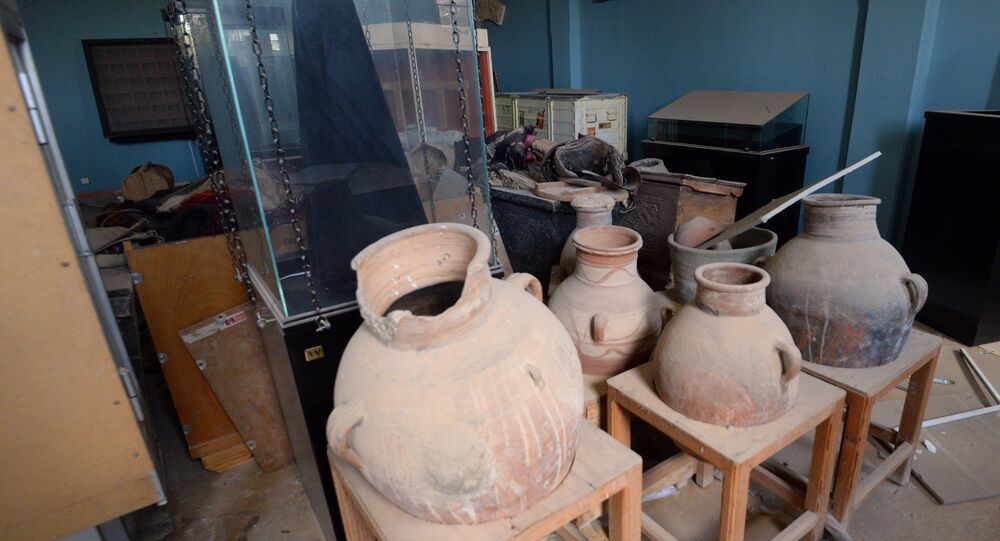 Vitaly Churkin, Russia's permanent representative to the UN, stated that Daesh terrorists are smuggling stolen cultural heritage artifacts through the Turkish city of Gaziantep, where the stolen goods are sold at illegal auctions and then distributed through a network of antique shops and at the local market.

© Wikipedia / Bernard Gagnon
Inside Liberated Palmyra: Ancient City Where Russian Specialists Run Operations
UNITED NATIONS (Sputnik) – The Islamic State (ISIL or Daesh) jihadist group generates up to $200 million in annual profits from around 100,000 cultural objects it controls in Iraq and Syria selling them through the Turkish city of Gaziantep, the Russian permanent representative to the UN said in a letter to the UN Security Council presidency.

"The main centre for the smuggling of cultural heritage items is the Turkish city of Gaziantep, where the stolen goods are sold at illegal auctions and then through a network of antique shops and at the local market," Vitaly Churkin’s letter states.

The letter asserts that artifacts including jewelry and coins are delivered by Turkish transport companies, sold in shops opened on the Turkish-Syrian border, and then arrive in Izmir, Mersin and Antalya where documents are forged to hide their origins.

Daesh’ smuggling operations are said to be organized by its antiquities department, part of the caliphate’s so-called ministry for control of natural resources, under the leadership of Abu Sayyaf Iraqi.

© AP Photo / Khalid Mohammed
US-Led Coalition Carries Out 23 Airstrikes Against Daesh in Syria, Iraq
Excavations at and transportation from around 4,500 archaeological sites, nine of which are in the United Nations Educational, Scientific and Cultural Organization (UNESCO) World Heritage List, are permitted only to those in possession of a stamp and signature from the department, according to the letter.

The disclosures come after the RT broadcaster uncovering a trove of documents last week revealing details of Daesh' illicit trade in looted antiquities with Turkey through the so-called ministry's department of artifacts. Two weeks ago, the broadcaster documented further proof of the terrorist group's fighters enjoying unrestricted travel across the border and selling oil to Turkey.

Ankara officially denies having links to the IS, a group outlawed in multiple countries including Russia.