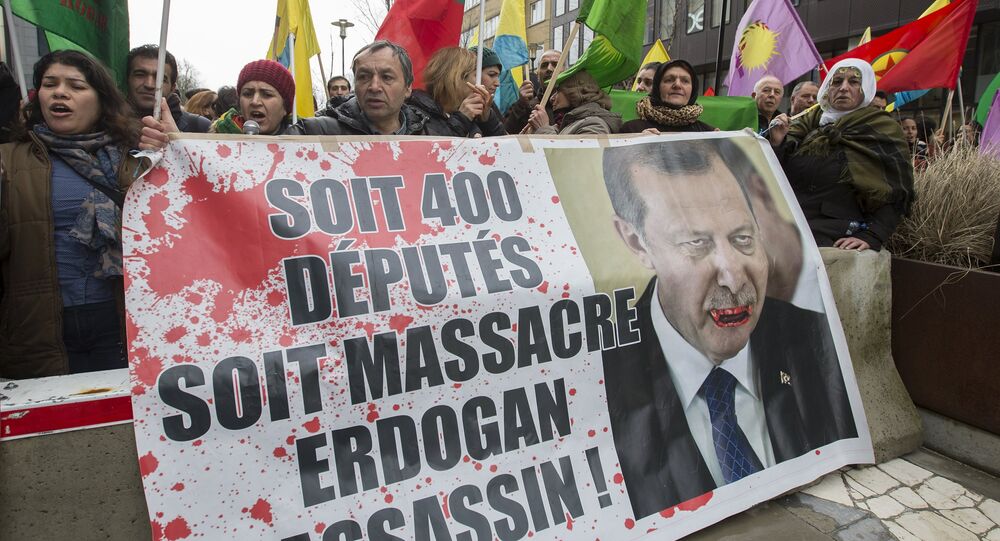 Revelations have emerged that Turkey is closing its border with Syria, repulsing refugees fleeing the Syrian civil war, and openly firing on asylum seekers, ahead of next Monday’s EU-Turkey deal to send asylum seekers in the EU to Turkey.

​An Amnesty International report released Friday alleges that Turkey has illegally deported thousands of Syrian refugees back to war zones in recent weeks, in violation of the non-refoulement principle of international law which prohibits a state from sending asylum seekers back to an active war zone.

Radio Sputnik sat down with Andrew Gardner, Amnesty International’s Turkey expert, to discuss the deteriorating plight of Syrian refugees attempting to cross into Turkey to avoid being killed or enslaved by Daesh extremists.

"We talked to Syrian refugees and people working in border provinces,” said Gardner. We’ve heard a clear and consistent and very worrying picture of regular forced returns of Syrian refugees back to Syria including men, women, and children."

Gardner said that refugees are being sent back in groups of several hundred. "In some of the cases that we’ve documented there were more than two hundred Syrian refugees sent back per occasion and this has been happening regularly which means there are likely thousands of Syrian refugees have been forced back to abysmal conditions in Syria."

Who is being deported?

Gardner claims that many people, including women and children, are being turned back to Syria for no cause. "The people that we have been able to find who have been forcibly returned back to Syria are either recent arrivals who have not been able to register in Turkey for temporary protection status because Turkey has suspended it, or people detained when they didn’t have their registration status card with them."

Even more concerning, Garner states that "some have also been detained when they’ve tried to approach authorities to register and they’ve been sent back."

He explains these recent developments are likely a politically-motivated effort by Turkey to force Western countries to develop a safe-zone for refugees within Syrian territory. "It seems to be targeting recent arrivals to Turkey and perhaps the Turkish government hopes that in the future refugees will be protected within Syria so right now they’ll only take in people with life threatening injuries."

How can Turkey secretly deport thousands to a warzone?

"It is kind of an open secret in the border provinces that these things have been happening and it isn’t the only abuses that are occurring," said Gardner. Other abuses include roadblocks from Syria into Turkey and numerous cases of "Turkish border guards using live fire resulting in deaths and injuries of refugees on the border."

Gardner says that the European Union’s "willingness to make deals with Turkey and plans to send refugees back to Turkey means the EU is turning a blind eye to abuses." He says that if the EU moves forward with their plans to send refugees back to Turkey, as planned to begin on Monday, "they would really lose all credibility as a political bloc that claims to stand up for human rights."

Do you think the UN or other third party could mediate the process?

Gardner commended the UNHCR for their role in documenting conditions for refugees entering Greece, but suggests that the group must now focus their efforts on the plight of Syrian refugees in Turkey. "The UNHCR, through their protection mandate, needs to be looking into these issues which hopefully their investigation will include the Turkish authorities as well," he said.

Are there legal mechanisms in place to protect Syrian refugees?

"Since September 2013, Syrian refugees have been given temporary protection status so it is a secure legal status that all people fleeing across the border should be entitled to," said Gardner.

"On paper they should also be granted access to health services and healthcare to children. But what we have seen and what Amnesty International has reported is that there are gaps in this, that people are going without essential healthcare."

Gardner remains steadfast that the EU has failed in their obligations as a world power standing for human rights, despite their pledge to give Turkey money to address the refugee situation.

"The EU isn’t living up to its responsibilities, which would require so much more. It would require EU resettling refugees from Turkey and from other states neighboring Syria, Jordan and Lebanon, these are the states that have been taking on the vast majority of responsibility for hosting refugees."

Ahead of next week’s deportation to Turkey of refugees who are seeking asylum in Europe, Garner offers, "It really is high time that the EU starts living up to its responsibilities."