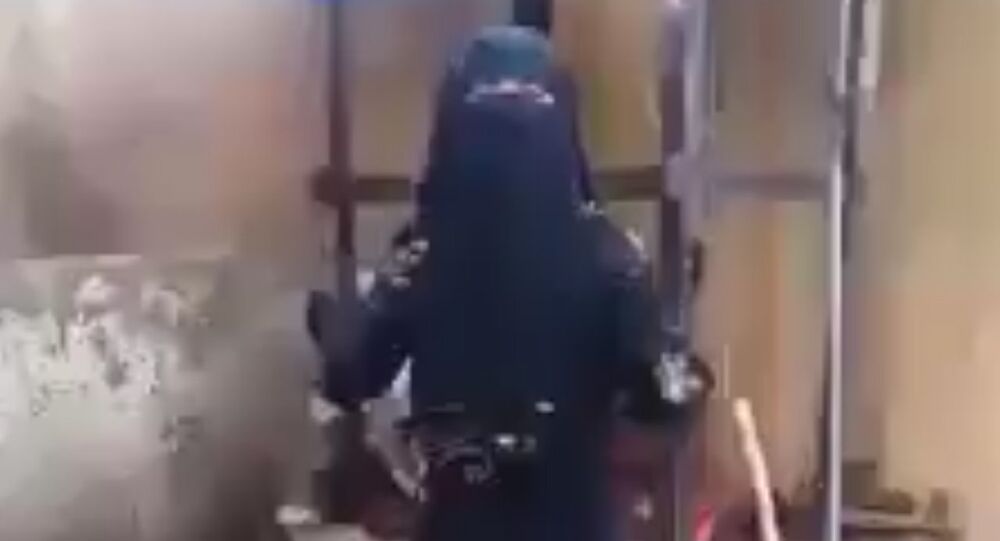 Daesh terrorists in the Iraqi city of Fallujah are feverently hunting for the woman who dared to post a video online in which she complains about life under the terrorist group, and criticizes the international community for not doing more to get rid of them.

Daesh terrorists in Fallujah, some 69 kilometers west of Baghdad, are searching for an Iraqi woman who filmed a two minute impassioned plea for help to defeat the terrorist group.

The video has since been shared by more than a quarter of a million Facebook users, many of whom left comments that echo her call for a more concerted effort to rid the region of Daesh.

The woman complains that people in Fallujah are starving because of a lack of food and unaffordable prices. She says that a carton of milk costs four dollars, and a packet of rotten maggot-infested dates, that are unacceptable to even feed to an animal, costs ten dollars.

"When will you rid us of this? We can't take it anymore! Hunger has destroyed everybody, and forced many women to throw their children in the river!" she shouts.

"This is how we live in Fallujah! We are dying of starvation. Arab countries like Saudi Arabia and the UAE, and the US and other countries don't think about us, the people of Fallujah."

"There is no food, no water, no medicine. People are dying. The hospitals are full of sick people, because people don't have normal food, clean water or medicine," she said.

A local resident told Sputnik that since the video's publication Daesh terrorists have been breaking and entering houses in Fallujah and taken anybody who they think could have played a part in its production.

The terrorists have abducted more than 100 people from their homes in the neighborhood of Golan, in the north of the city, and that their whereabouts are now unknown.

© AFP 2020 / AHMAD AL-RUBAYE
Starving Iraqi Women in Fallujah Shower Daesh Terrorists With Stones
The violent crackdown is not the first time Daesh has been faced with resistance from the starving local population of Fallujah, who are left without food or other commodities after Daesh fighters take first refusal on items that enter the city.

On March 28, tens of starving Iraqi women took to the city's streets in protest at the lack of food, carrying slogans such as "Famine is killing us."

​According to varying estimates, between 30,000 and 60,000 people still remain in  Fallujah, which has been under Daesh control for more than two years.

© East News / Balkis Press
Daesh Leader Baghdadi Alive, Moves Between Syria and Iraq - Pentagon
The city, which once had a population of more than 300,000, has been under siege by the Iraqi army since early 2014 when Daesh seized the city — making it the first Iraqi town to fall to the militants.

Iraqi forces have gradually sealed off Fallujah to isolate the militants.

Earlier reports suggested that the Iraqi armed forces together with the forces of the Iraqi Popular Army had succeeded in opening a corridor for the civilians to flee the area.