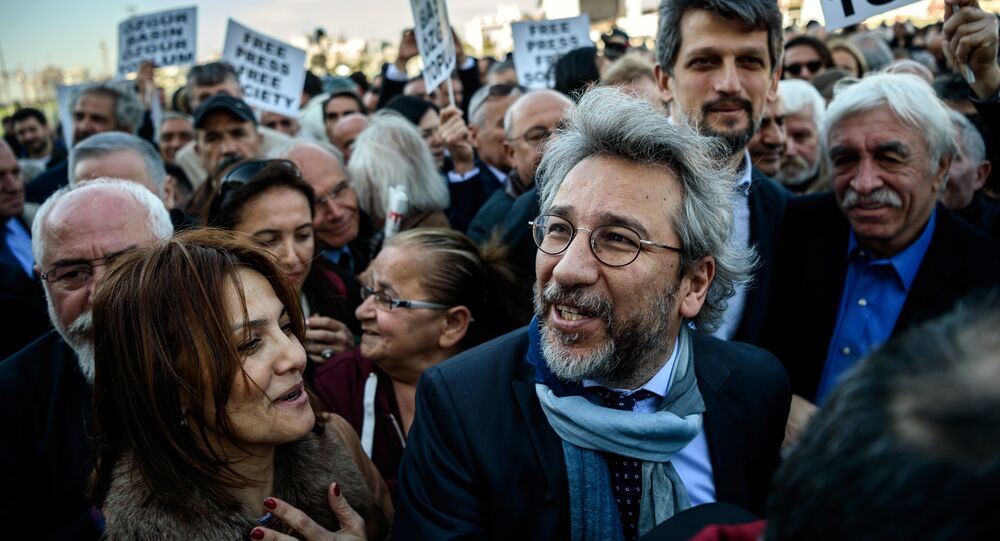 New allegations against Turkey's Cumhuriyet journalists in a controversial secret trial could only further unravel the case, one of the defendants, Can Dundar, told Sputnik Turkiye.

Journalist Can Dundar, who is on trial in Turkey for "espionage," told Sputnik that the case against him is starting to collapse, as prosecutors are beginning to grasp for leads that could lead to his acquittal.

Can Dundar, the chief editor of the newspaper Cumhuriyet and Ankara bureau chief Erdem Gul were put on trial for releasing footage of the Turkish intelligence agency MIT smuggling arms into Syria. After Dundar said that he got the footage on a thumb drive from a "left-wing legislator friend," a Turkish pro-government newspaper proposed that the man is Enis Berberoglu, head of the Republican People's Party (CHP).

"I think they have tried everything. We have been called both agents and supporters of the Gulen movement. They've searched our apartments. They said that I was interviewed on air on a Kurdish TV channel. They are trying to use any clue to find anything that could put us behind bars. It is strange that this time they began to spin the story with speculations about Enis Berberoglu. After all, in fact, that can provide us with an acquittal," Dundar told Sputnik Turkiye.

© AFP 2021 / Ozan Kose
Turkey in Fresh Diplomatic Row as Consuls Support Under-Fire Journalists
Fethullah Gulen is a Turkish preacher living in exile in the United States, who initially sided with Turkish President Recep Tayyip Erdogan, but broke with him after the 2013 corruption scandal.

Dundar added that he would not disclose his source out of journalistic principle, although the source told him that he could be named and brought as a witness.

"Is it not they who were accused of releasing information on the corruption scandal. I am a journalist, whose business is it, where I get the information? My source is not related to Gulenists," Dundar told Sputnik Turkiye.

Although Turkey's Supreme Court ruled that Dundar be freed, the case against him was still pursued. It was originally put on hold and ordered to proceed behind closed doors on March 25.

The Cumhuriyet newspaper's website was also blocked by a Turkish court order, after it released information about the indictment of a Turkish businessman with links to Bilal Erdogan, son of the Turkish President. The businessman was jailed in the United States on a case linked to the 2013 Turkish corruption scandal.

Turkish Policy in Syria to Deteriorate Relations Between Republics for Long