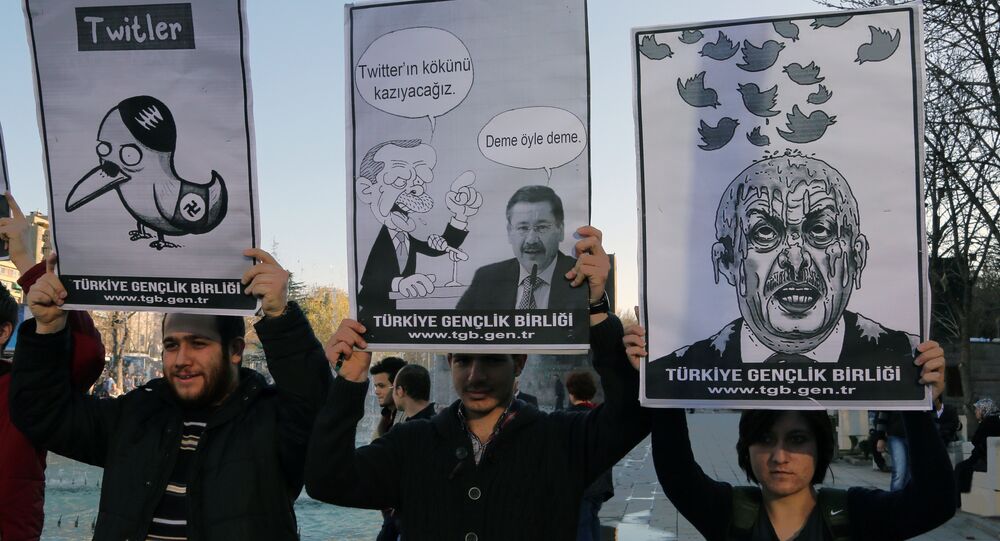 Turkish media are now accusing Twitter of censorship after the top-trending Erdogan hashtag #WeLoveErdogan vanished from the site, however neglecting to mention that back in 2014, it was Erdogan who swore to eliminate the social media platform's presence in his country; experts say the mysterious disappearance was due to purely technical reasons.

The vanishing of the top-trending hashtag #WeLoveErdogan, which was launched on Twitter just ahead of the Turkish president’s visit to the Nuclear Security Summit in Washington, has caused an uproar in Turkey.

​The country’s media and senior government officials have been quick to slam the microblog network, claiming it “censored” the hashtag after it disappeared from its top trending tweets.

50.5 % of my country does not love him. #WeLoveErdogan

​“I’m asking Twitter officials: Who instructed you to remove the #WeLoveErdogan hashtag? Was it a country, a person, a terrorist organization, or someone else?” the country’s Hurriyet Daily News quotes Justice Minister Bekir Bozdag as telling reporters on March 30.

​The newspaper also reported that Ankara Mayor Melih Gökçek said Twitter had deliberately taken it down.

“This hashtag #WeLoveErdogan got TT ranking worldwide… But then it was censored unbelievably,” it quotes Gökçek as saying; it accused supporters of Erdogan’s “friend-turned-foe”, the US-based Islamic scholar Fethullah Gülen, of being behind its removal.

This is the most gross hashtag I've ever seen. #WeLoveErdogan

​Both the media and the high-ranking officials, however, neglected to mention that the Turkish president’s relations with the micro-blogging network have not always been so smooth.

Previously president had attacked Twitter, comparing social media to a ‘knife in the hand of a murderer’ and proudly declaring that he does not “tweet or schmeet.”

​While prime minister back in 2014, Erdogan initiated a block on Twitter, promising to eliminate the social media platform.

“We will wipe out Twitter. I don't care what the international community says,” Erdogan said at the time. “They will see the Turkish Republic's strength."

The ban was lifted by the Constitutional Court two weeks later following its ruling that the block violated freedom of speech.

​The situation suddenly changed in 2015, when “Turkey’s famously technology-phobic President Recep Tayyip Erdogan,” as AP called him, seemed to have finally lost his hostility to the network.

While on an official visit to Colombia, in February 2015, he sent his first ever personal tweet from the account @RT—Erdogan.

​It was a tweet denouncing smoking on Turkey’s national anti-tobacco day, February 9, signed with his initials — RTE.

Purely Technical Reasons Behind the Disappearance of the Hashtag

Upon launching such a massive campaign in support of their president, his fans, however, should have been better  aware of the working mechanism of the network.

Turkish social media researcher Onur Yazıcıoglu is absolutely convinced that the vanishing of the top trending tag happened due to technical and not political reasons.

​“The available data suggests that there were about 247,000 tweets posted under the hashtag #WeLoveErdogan by some 48,158 users,” he told Sputnik Turkey.

“This means that in one hour one user had tweeted 5 or even 10 times, which is not typical for Twitter. Usually one user tweets a maximum of 3-4 times on one topic.”

Twitter, he stressed, is a social platform which is being formed by the users themselves. However the Turkish political parties often regard it as an instrument of political propaganda.

“it is not banned on Twitter, but from the point of view of marketing, similar campaigns usually shatter the network because the users are continually forming one and the same content, posting and discussing the same very information under the same hashtag promoted through false accounts.”

The expert suggested that there might be a certain quota on tweets which are suspected as coming from a phony user and when it is exceeded, the hashtag is automatically deleted.