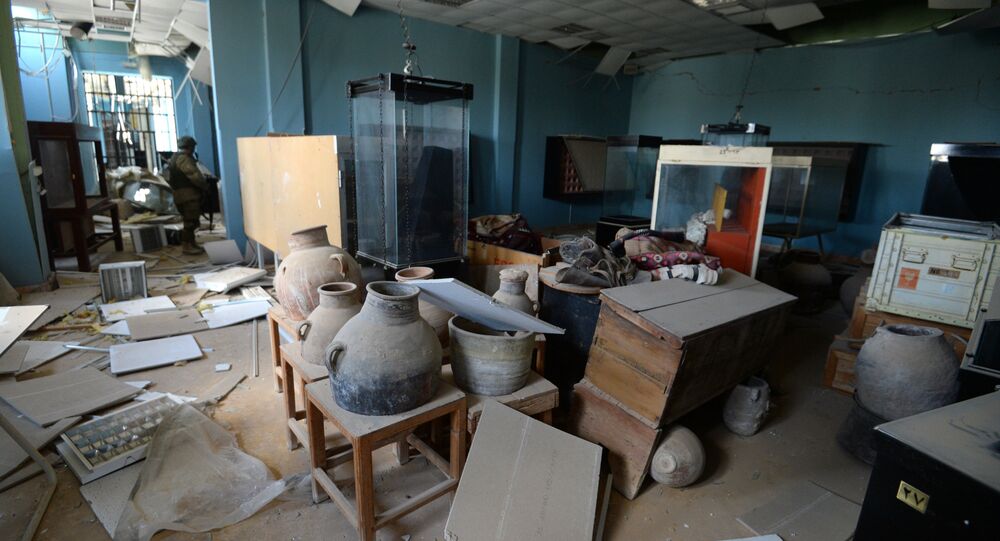 While thoroughly studying the bundles of documents obtained upon gathering material for its new film on Daesh's activities in Syria, the RT Documentary crew discovered that in addition to routing oil and weapons trafficking through Turkey, the jihadists also organized trade of looted antiquities, with a separate department to manage the business.

© Flickr / Wally Gobetz
Lawmakers Urge Treasury Dept to Block Import of Looted Syrian Antiquities
According to a document that the Kurdish People’s Protection Units (YPG) turned over to an RT Documentary crew during their visit to Syria, there is the one that says that the so-called Ministry of Natural Resources established by Daesh to hold grip of the oil operations had a separate “Department of Artifacts.”

"One of the new documents is a note that has the same letterhead of Daesh’s (ISIS,ISIL’s)  Ministry of Natural Resources as the oil bills of sale, which we discussed last time," says RT journalist, whose name has not been revealed for security reasons.

The note, which seems to address a checkpoint sentry, asks him to let a Turkish antiquity seller to cross into Syria.

"To the brother responsible for the border, Please assist the passage of brother Hussein Hania Sarira through your post along with the man from Turkey – the artifacts trader, for the purpose of working with us in the department of artifacts in the Ministry of Natural Resources. May Allah bless you, Loving brother Abu Uafa At-Tunisi," the note reads.

Abandoned in a tunnel, which ISIS fighters fled through, they were discovered by the Kurdish YPG troops after they liberated Shaddadi from jihadists in the summer of 2015.

The note therefore proves that Daesh militants have been selling the antiquities they had looted via the same trade route, which, they used to bring in weapons and supplies.

Many of the artifacts, some worth thousands of dollars apiece, have been turning up in antique markets from eastern Europe to the US.

The YPG also gave RT a video interview featuring a Daesh militant after he was captured by the Kurds in the Syrian town of Tell Abiad on border with Turkey, who also confirms that there was a very loose control of the border from Turkey.

"They sent me to serve in Tel Abyad [Tell Abiad] on the Turkish border. Sometimes we even crossed the Turkish border and served there. We saw the Turkish army passing by, but there was never any kind of conflict between us," militant Abu Ayub Ansari recalled.

He also said that it were the Kurds who stopped the free flow between the Turks and the militants.

He stressed that after Kurdish militia had recaptured Tell Abiad "the connection was lost and foreign fighters could not get in" and "the communication with the Turkish security services was broken."

© AFP 2021 / OZAN KOSE
Despite All Evidence: Washington Remains Blind to Ankara's Complicity in Terrorism
The Kurdish control of the town hit the extremist financially as "the tankers can't drive through the area," and "the goods that came from Turkey have also disappeared," Ansari added.

The RT crew has previously released the unique documents which reveal the scope of Daesh's illicit oil business via Turkey and the revenue it provided.

The proof included captive Daesh fighter interview, testifying that the oil which Daesh produces was sold to Turkey in amounts so great that it is impossible that the Turkish authorities are unaware of this, with Ankara sending funds, arms and food to Syria.

Among the obtained documents there are also some which shed the light on what it was like to live under their reign of terror.