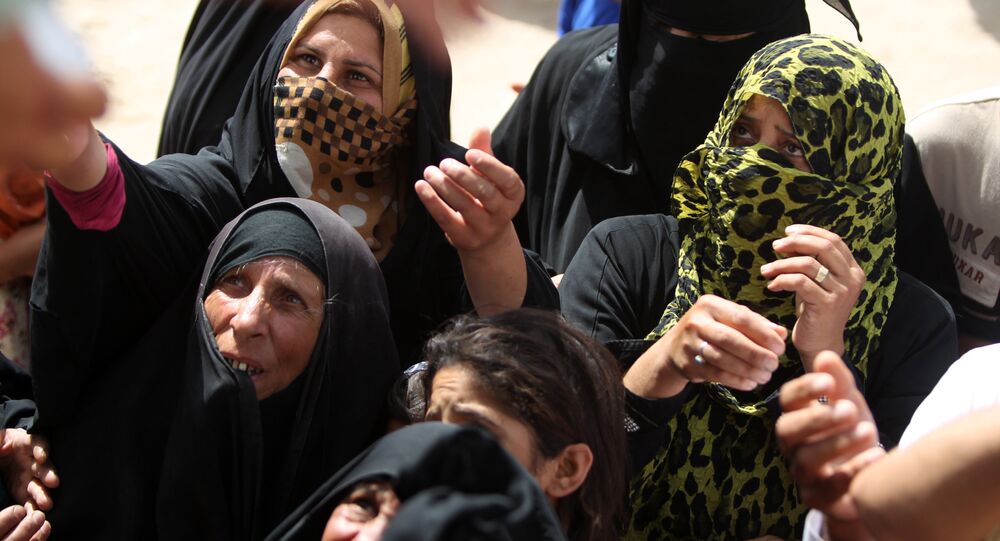 Tens of starving Iraqi women, who have taken to the streets of the city of Fallujah, some 69 kilometers west of Baghdad, in protest against a famine brought on by Daesh, showered the terrorists with stones upon their attempt to disperse the crowd with water.

“Famine is killing us,” read the slogans carried by tens of women who took to the streets of Fallujah, a city in the Iraqi province of Al Anbar, located roughly 69 kilometers west of Baghdad on the Euphrates, in protest of the genocide of the Iraqi population by a famine forced on them by Daesh.

​The military siege of the area, which has tightened in the past two months, is preventing food and medical supplies from reaching the city. Meanwhile the Islamic State (Daesh) is refusing to let the families leave the area.

“These women have gone after the militants controlling the city and have demanded an end to the famine which has forced as many as seven families to commit suicide,” a source on the ground, who preferred not to reveal his name, told Sputnik.

“The militants demanded the crowd to disperse, but the women kept where they were. Then the so-called 'Islamic police' of Daesh tried to scatter them with water,” he added.

Sadly inaccessible, women & children in #Fallujah, #Iraq, are starving under siege. Please make du'a for Allah to relieve the situation.

​This only inflamed the situation and inspired the women to grab stones from the ground and start showering the militants. Two of the jihadists were taken to a hospital in a critical condition after taking hits to the head.

“Right afterwards the militants started grabbing the demonstrators and taking them away somewhere,” added the source.
Some of the women managed to escape.

© AFP 2020 / PATRICK BAZ
Love Thy Enemy? US Plot to Evacuate Top Jihadis From Ramadi Uncovered
According to varying estimates, between 30,000 and 60,000 people still remain in the city, which has been under Daesh control for more than two years.

The city, which once had a population of more than 300,000, has been under siege by the Iraqi army since early 2014 when Daesh seized the city — making it the first Iraqi town to fall to the militants.

Iraqi forces have gradually sealed off Fallujah to isolate the militants.

Earlier reports suggested that the Iraqi armed forces together with the forces of Iraqi Popular Army had succeeded in opening a corridor for the civilians to flee the area.