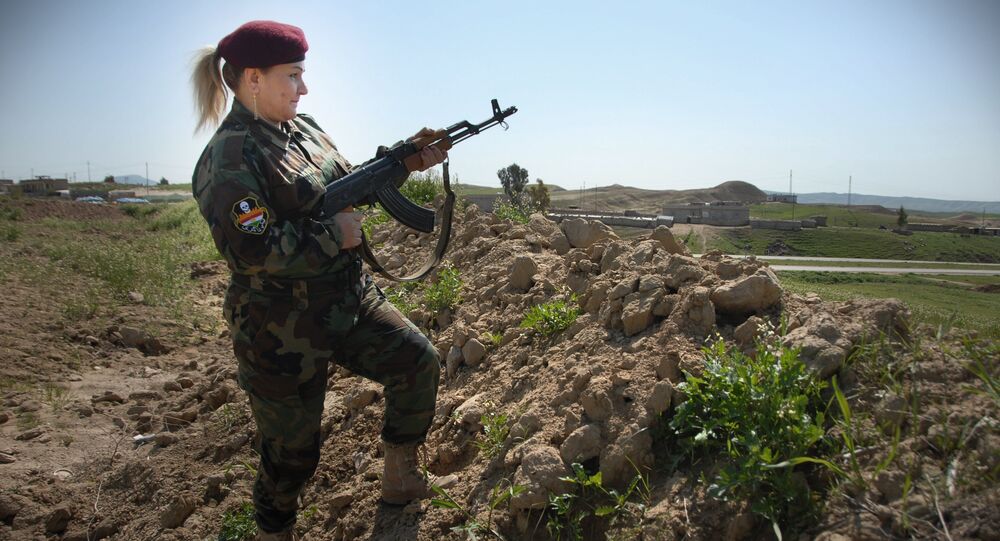 Women on the Warpath: Female Peshmerga Fighters Pledge to Wipe Out Daesh

Many Kurdish women have joined the Peshmerga, the military forces of Iraqi Kurdistan, and are poised and ready to fight Daesh to the last lady, according to Hesibe Azad, commander of the Peshmerga female battalion.

© AP Photo / File
‘Catastrophic Success’: Daesh' Rapid Defeat in Mosul Could Lead to Chaos
In an interview with Sputnik, Hesibe Azad, commander of the women's Kurdish Peshmerga battalion in Iraq, signaled her resolve to fight to the finish in order to eliminate the Daesh terrorists who have brought ethnic cleansing, crucifixion, institutional rape and slavery to northern Iraq.

The interview came as the Iraqi Army continues a military operation to liberate the country's second largest city, Mosul, from the terrorists. Taking part in the operation are Kurdish Peshmerga forces, with many Kurdish women indicating their intention to join in Peshmerga's efforts to destroy Daesh.

"Women must be strong fighting Daesh and other terrorist groups. We will clean up the Kurdish territories from dirty Daesh and take revenge for the entire Kurdish people. We are ready to fight to the last to defend our dignity and free our people," Azad said.

She added that first and foremost, it is necessary to win back Mosul, which she said will add significantly to her cherished desire to finally wipe out the Daesh terrorists.

Azad said that despite suffering considerable losses, Kurdish women are not afraid to continue combating Daesh.

"It's the other way around: it is the jihadists who fear female Peshmerga. They are afraid of being killed by a woman, because they think that if they die in such a way they will find themselves in hell. This is why they are afraid of us," she said.

© AP Photo / Bram Janssen
Kurdish Peshmerga to Miss Russian Air Support Against Daesh, Nusra Front
The Kurdish Peshmerga are considered to be the most effective ground force fighting against Daesh, and has retaken significant swathes of territory in northern Iraq which were once controlled by the terrorists.

On March 5, special US presidential envoy for the international anti-Daesh coalition Brett McGurk announced the launch of a campaign to liberate Mosul. Daesh, a terrorist group that has been condemned by the governments of Russia, the United States and many other countries, captured Mosul and some of the area surrounding it in June 2014.