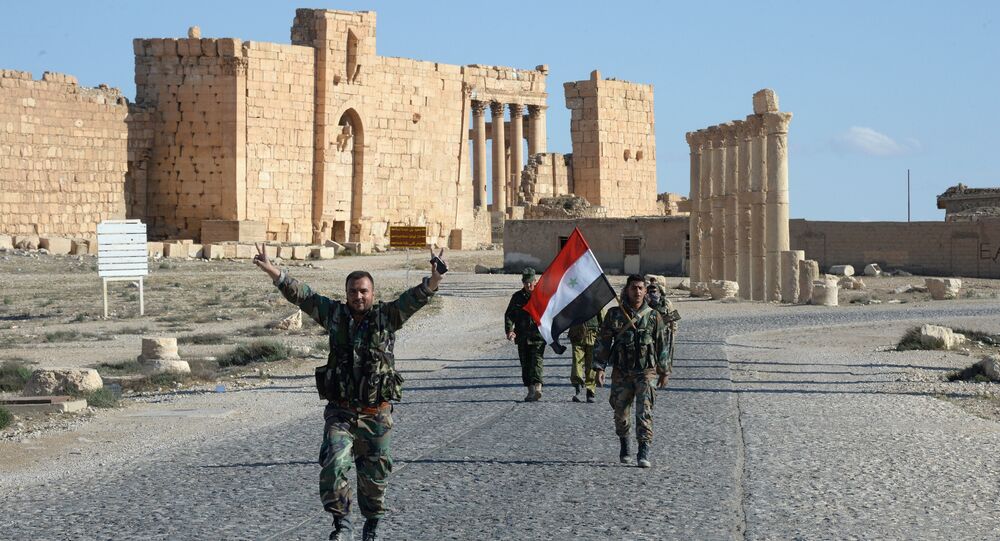 After taking back Palmyra from the Daesh terrorist group the Syrian army and allied forces will rapidly take back other areas under terrorist control, but Syria's problem with Islamic terrorism will remain because of support from Turkey and Saudi Arabia, Tim Anderson, Senior Lecturer in Political Economy at the University of Sydney, told Sputnik.

​"When a very large group of around 1600 (Daesh) fighters went across the desert to claim Palmyra, there was no bombing at all from the US because it suited their purposes for ISIS (Daesh) to seize territory from the Syrian government and effectively make the Syrian state dysfunctional."

© AFP 2020 / STR
Refugees No Longer: Residents Return to Liberated Palmyra, Thank Russia for Helping Hand
Anderson alleged that US intelligence knew four years ago about the plans of opposition groups in Syria, namely al-Qaeda's affiliate Jabhat al-Nusra, the Muslim Brotherhood and other Salafist groups, to set up a caliphate in eastern Syria.

"The evidence has been there for a long time that the close allies of the US have always been these al-Qaeda groups, but because they talk differently in public, people are confused."

The Syrian army's victory over the Daesh terrorist group is not only symbolically important, but represents a substantial victory that Syria's armed forces and allied popular defense forces achieved even after many of Russia's air forces had left Syria, Anderson said.

"Principally it was the Syrian army retaking Syrian soil from the Western-backed extremist groups, and that's extremely important."

"When Palmyra was taken by ISIS (Daesh) last year, people were predicting the fall of Damascus. Now, they're very silent."

YouTube/Sputnik
Red Wire or Blue Wire? Syrian Soldiers Defuse Daesh Landmines in Palmyra
Anderson believes that the liberation of Palmyra is a turning point in the fight against the Daesh terrorist group, and it will spur the Syrian army to retake more territory, for example Deir-Ez-Zor and Raqqa.

However, he said that Syria will continue to have a problem with Islamic terrorism because of support for radical Islamic groups from Turkey and Saudi Arabia.

"Raqqa will probably be the last major operation to liberate Syrian territory because it is quite a large town."

They Did It! Syrian Soldiers Savor the Liberation of Palmyra