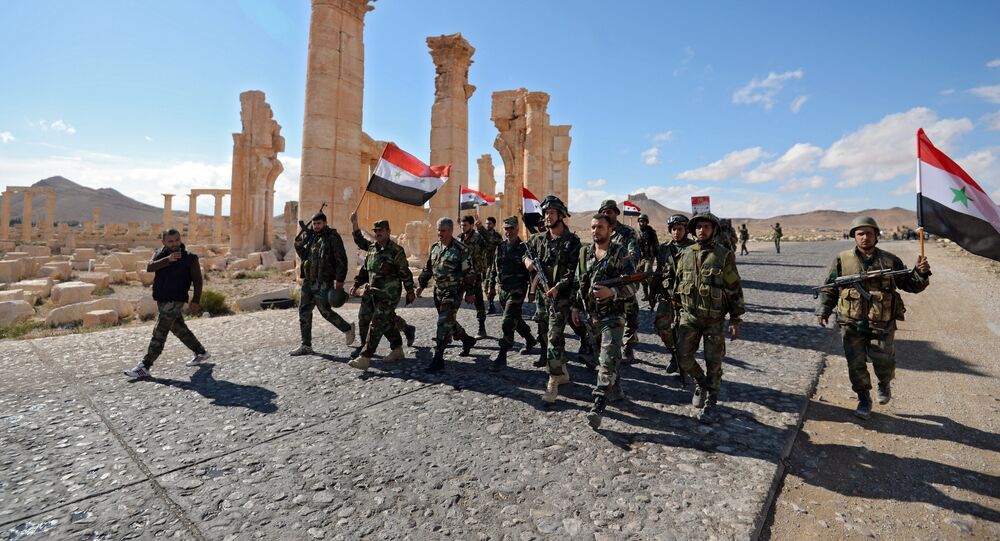 Palmyra's Liberation Greeted With Praise Despite Silence of Officials

While Western authorities remain “decidedly muted” over the liberation of the ancient city of Palmyra from Daesh terrorists, many Western readers have lavished their admiration on the UNESCO site's liberators when commenting on dry factual articles. Sputnik has compiled a small number of these readers' responses.

While Western journalists wonder why their Western leaders “appear unenthusiastic” over the biggest military defeat of Daesh militants in Syria so far, their readers aren't concealing their admiration of those who fought to liberate the ancient city of Palmyra.

​Comments in the US media:

"Dilemma indeed. How to explain to the American public that the US really didn't oppose IS because the US thought IS would deliver the coup de grace to the Syrian government? Instead, IS will soon be driven from Syria by the Syrian Arab Army backed by Russian air power Meanwhile, the CIA backed mercenaries and the Pentagon backed mercenaries are fighting each other in the small corner of northwest Syria not yet controlled by the Syrian government.

For many Western pundits, the Syrian and Russian military assault on ISIS at Palmyra is…

​No doubt telling the truth will not be an option. Instead we will get more phony 'narratives' duly conveyed by the LAT and other mainstream outlets."

"It took a real man like Putin, in a country that still knows right from wrong, Russia, to solve the Syrian war."

"I wonder if this means the Syrian civil war is once again at risk of ending? If so, what measures can we take to ensure it continues?…the irony here is that it's not clear that I'm being sarcastic.  Many here would post the above or close to it in all seriousness."

The #shameless wild West #silence about #Palmyra liberation by #Russia and #Syria war against #Daesh, is the best evil proof.

​"Since Putin got involved the situation gets worse for IS! LOL, and Obama said that Putin will leave defeated! O tries to claim to be part of Putin's success now!"

"The USG won't give up its bad habit of overthrowing elected governments it doesn't like. Regime change is one of those euphemisms to muddy the waters, as if calling an elected government a 'regime' legitimizes illegal US aggression against them. Russia has waged a serious war against ISIS in Syria, and against the US-armed, trained and supported groups, many of them affiliated in one way or another with the terrorists and all acting as a proxy US army to bring down Assad. The US goal has never been to stop ISIS, only to show it can still pick and choose other people's governments."

By the utter silence from Western leaders you would have thought they were not happy for the liberation of #Palmyra.

​"The advance by Syrian President Bashar al-Assad’s forces showed how reliant the regime remains on help from Russia, which said Sunday that its warplanes had hit more than 100 targets over 24 hours in the vicinity of Palmyra.

Putin is killing Islamic State terrorists. That's a good thing. This is how it's done Obama, 100 bombs in one day."

Comments in the UK media:

"The West owes Putin a debt of gratitude."

"This is the difference. Obama supports, arms and then apologises for terrorists. Putin destroys them."

"Had the west supported Syria and Assad, Palmyra would still be intact, there would be no drownings, EU would be safer and refugees would still be living at home. Our foreign policy is a foreign disaster."

"Well done Putin. He has the 'balls' that Cameron and the EU politburo lack."

"Who would you most trust to fight and protect the interests of your country — Cameron, Obama, or Putin? Bit of a no brainer really isn't it."

"America could take some Tips from the Russians.. They get the job done."

"Putin has invited Western countries to assist in the de-mining and cleanup of Palmyra; whether the West does or does not assist it's another public relations coup for the Russian President. Come on Obama, Kerry, Cameron and Hammond, it`s time to call it a day and tell your Wall St bosses that the game is over, and you've LOST."

"I could not help but smile when I read that the US command claimed two air strikes against Isis around Palmyra in the days leading up to its recapture by the regime. That really did tell you all you needed to know about the American 'war on terror'. They wanted to destroy Isis, but not that much."

When Daesh takes Palmyra from Assad forces, everyone freaks out. But when Assad forces take it back, eerie silence or smug dismissal. Weird

​"It is not only Dave that has been quiet, the whole western media have been quiet about it as well. Now if the Americans had liberated Palmyra,it would be front page news, story after story but because it is the Syrians, Hizbollah, Iran and the Russians, it is hardly mentioned. Just goes to show who runs the media in the west."

"ISIS is a 100% western creation, to give the West reason for continuous military presence in the region, for decades to come. That *was* their plan. Now let them mess with Russia if they have the nerve: Turkish F-16 haven't even taken off, since the day the S400's became operational in Northern Syria…"

Howls of outrage when Daesh took #Palmyra. Deafening silence when Syria liberated it — because it did so with Russian help. Go figure.

​"The silence of Western leaders over the recapturing of Palmyra is for the same reason the allies during WW2 never once bombed the tracks that took millions of people to the Nazi death camps. Vested class interests. From Standard Oil, Ford, ITT, Coca Cola to IBM, to name a few, that kept the war going.

ISIS is a creation of Western imperialism; oil, political power and profits are the basis of the present silence. The same reason why Turkey keeps the border open with Syria – oil deals with ISIS. For them it's business as usual. The point is us and our response in how we protect our own class interests."

Historical Sites in Palmyra May Be Rebuilt Without Looted Values

US Has No Plans to Help With Demining Palmyra - State Department