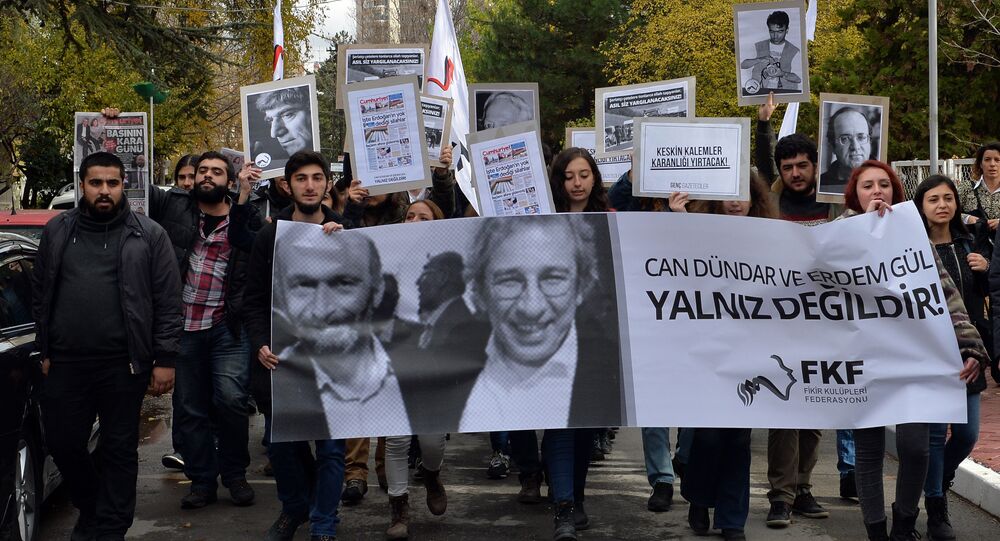 Turkey has issued notes of protest to foreign missions in the country over the presence of EU diplomats at the court hearing of two top journalists from the Cumhuriyet daily accused of revealing state secrets, local media reported Monday, citing a Turkish diplomatic source.

MOSCOW (Sputnik) — In November 2015, Can Dundar and Erdem Gul, the editor and the Ankara bureau chief of the Turkish newspaper Cumhuriyet respectively, were arrested on the grounds of accusations against them made by President Recep Tayyip Erdogan and the head of the National Intelligence Organization (MIT) after they published an article bringing to light MIT arms deliveries to Syria.

Friday's first hearing was attended by several EU diplomats, including the British consul to Istanbul, who tweeted pictures from the court.

"We have conveyed our discomfort to the concerned countries' representatives over the comments shared on social media which may constitute interference in the independent judicial process and which do not comply with impartiality," the Daily Sabah newspaper quoted the source as saying.

Dundar and Gul could face a maximum life sentence for revealing state secrets. Both deny their guilt and claim the state violated their rights.