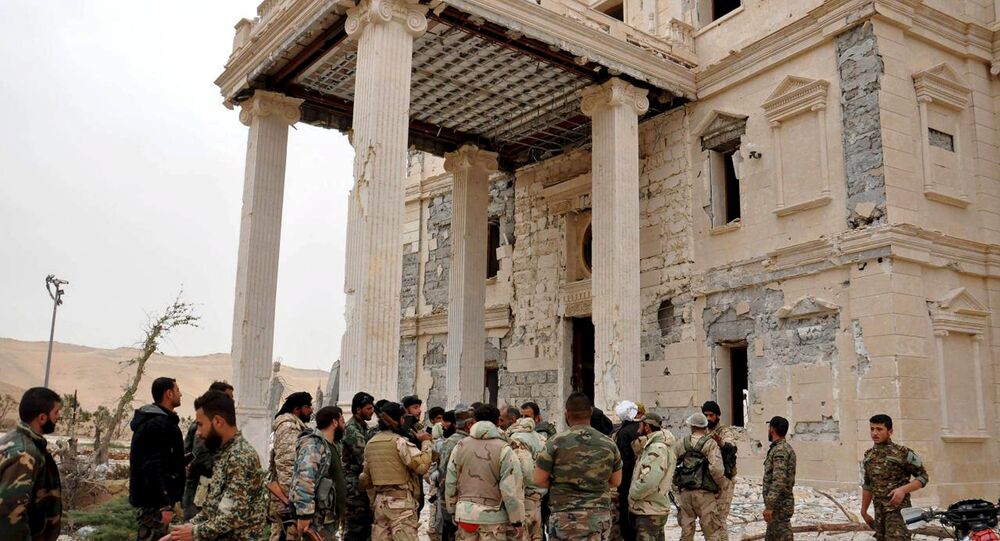 Earlier on Sunday the Syrian Army together with the Desert Falcons fully liberated the ancient city of Palmyra from Daesh militants. A Syrian field commander told RT the details of the operation.

"Preparations for the liberation of Palmyra were made for a little over than a month. The Syrian Army was re-grouping its soldiers. The army made communications with the Syrian Air Force and especially with the Russian Air Force. Tanks and other military vehicles were brought to Palmyra together with Syrian troops and their allies," the military said.

© Sputnik / Mikhail Voskresenskiy
Syria’s Desert Falcons Thank Vladimir Putin for Support in Liberation of Palmyra
The Syrian army confirmed Sunday that it had liberated the historic city of Palmyra from Daesh terrorist group with support of national aviation and Russian Aerospace Forces.

According to the Syrian officer, the main task was to take control of Palmyra heights.

"Last night, we managed to take control of Palmyra’s ancient fortress. Then we prepared to take over the city. Daesh terrorists blew up a bridge that leads to the fortress. That’s why our infantry had to enter the city from the north side under the cover of artillery fire and tanks to eventually liberate these areas," the officer told RT.

© Sputnik / Dmitriy Vinogradov
Russian Warplanes Destroy 8 Terrorist Command Centers, 6 Ammunition Depots in Palmyra
He underscored that the liberation of Palmyra is a serious blow to terrorists’ logistical and supplying capabilities. According to Suleiman, Palmyra was a supplies hub for the terrorists.