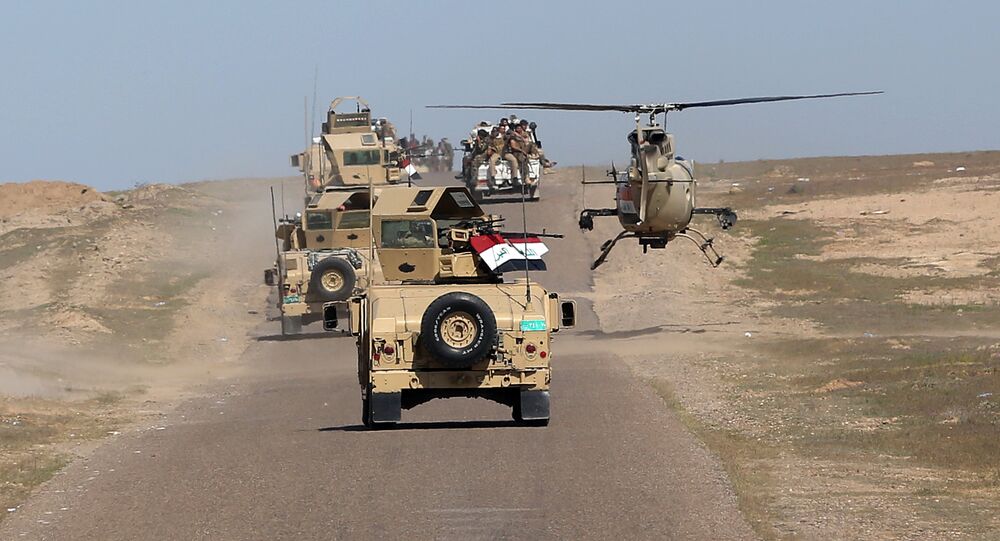 As Syrian troops close in on Palmyra, the Iraqi military and militias reported gains against the Daesh terrorist group in their offensive on Mosul and much of the occupied Nineveh province.

Daesh fighters in Iraq's Nineveh province are suffering heavy losses and are forced to retreat when battling the Iraqi army and militias a militia spokesman told Sputnik.

Daesh forces are also suffering huge losses on the approach to their biggest base, the city of Mosul, press secretary of the National Mobilization Forces Mahmoud al-Surji told Sputnik.

© Sputnik / Mikhail Voskresenskiy
A Cleaving Blow: Palmyra's Liberation Spells Doom for Daesh
The Iraqi military earlier said that it began the operation to liberate Nineveh and its capital Mosul from Daesh.

"The Iraqi armed forces, supported the Kurdish Peshmerga and [US-led] coalition aviation, managed to get a foothold in the village of Nasr, located 25 kilometers [15.5 miles] from Mosul," the Defense Ministry told RIA Novosti.

According to the ministry, the liberation of settlements "was the successful start of the first stage of the operation to liberate the whole of the Nineveh province, seized by terrorists."

At the same time, Kurdish forces have been leading an offensive against Daesh from the north of the province. Also on Thursday, Turkish warplanes bombed and destroyed Kurdish forces' ammunition depots and camps in Northern Iraq, which it says belong to the Kurdistan Workers' Party (PKK). The PKK is outlawed in Turkey as a terrorist organization, but a combatant against Daesh among Peshmerga forces in Iraqi Kurdistan.

US-Led Coalition Against Daesh Carries Out 25 Airstrikes in Iraq, Syria