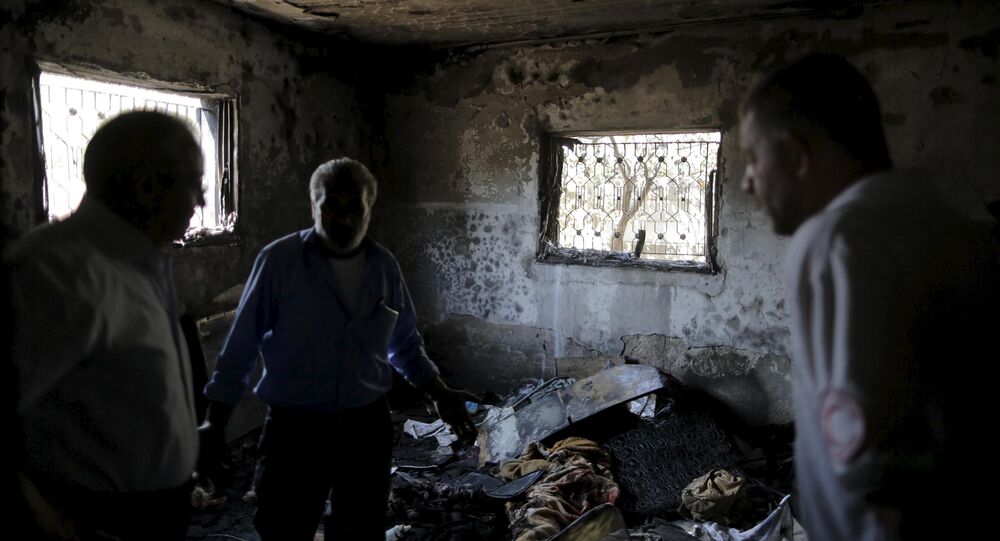 A violent arson attack over the weekend lends credence to US Vice President Joe Biden’s claims that Israeli settlements on occupied territories raise tensions among Palestinians.

During a speech before the American Israel Public Affairs Committee (AIPAC) on Sunday, Biden, in an effort to promote peace, called on the Israeli government to end its expansion of settlements into Palestinian territory.

"Israel’s government’s steady and systematic process of expanding settlements, legalizing outposts, seizing land, is eroding, in my view, the prospect of a two-state solution," he said. "There is no political will at the moment among Israelis or Palestinians to move forward with serious negotiations. And that’s incredibly disappointing."

On the same day that Biden delivered his speech, the Palestinian Information Center (PIC) reported a deadly attack by two unidentified Israelis.

The incident involved the home of Ibrahim Dawabsheh, the key witness to a separate arson attack in Duma last summer that killed 18-month-old Ali Dawabsheh.

On Sunday, the suspects threw two Molotov cocktails into the Dawabsheh home in an apparent attempt to murder the witness. While Ibrahim and his wife were not burned in the attack, they were both rushed to the hospital for smoke inhalation.

Ibrahim’s wife said that in the days leading up to Sunday’s attack, the family heard a number of strange noises around the home.

The attack was conducted in a similar manner as the one Dawabsheh witnessed last summer, and coincided with a criminal hearing for the main suspect of that incident.

"Official condemnations of this attack are empty rhetoric as long as politicians continue their policy of avoiding enforcement of the law on Israelis who harm Palestinians, and do not deal with the public climate and the incitement which serve as backdrop to these acts," the group said at the time.

"We’ve stressed to both parties the need to take meaningful steps to demonstrate their commitment to a two-state solution that extends beyond mere words," Biden told AIPAC, as the fire burned.

"There’s got to be a little ‘show-me.’ This cannot continue to erode."