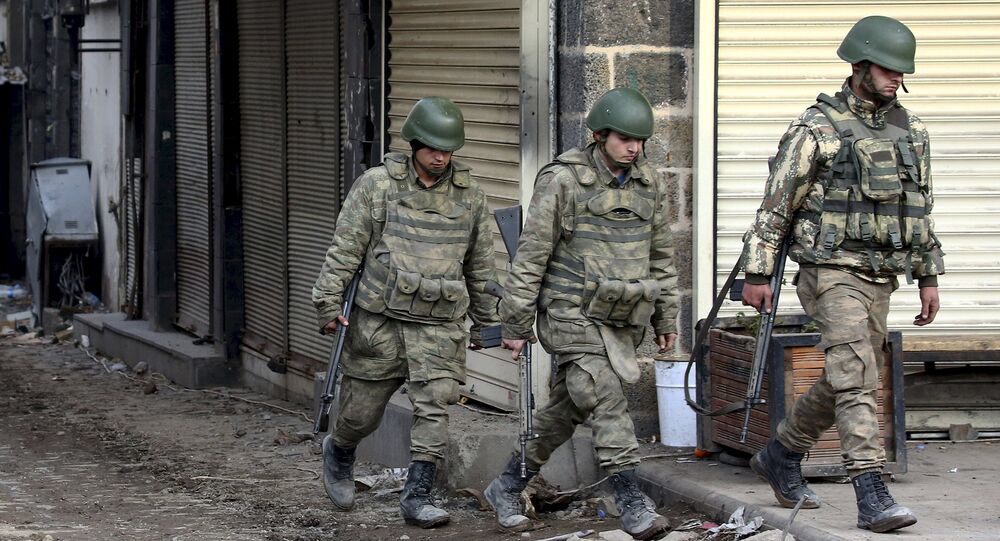 Turkish General Staff reported that 22 militants from the Kurdistan Workers' Party (PKK) were killed were killed in the past 24 hours during the standoff between the Turkish government and PKK.

© AFP 2020
Turkish Soldier, 28 Kurdish Militants Killed in Clashes in Southeast Turkey– General Staff
ANKARA (Sputnik) — A total of 22 militants from the Kurdistan Workers' Party (PKK) were killed by the Turkish army in the space of 24 hours in a counter-terrorist operation in the country's southeast, the Turkish General Staff said in a statement Monday.

The general staff also confirmed Turkish media reports of the deaths of four servicemen during an operation in the city of Nusaybin on the Syrian border.

© REUTERS / Sertac Kayar
Turkish Authorities Announce Curfew in Southeastern Sirnak City
The standoff between the Turkish government and PKK has claimed the lives of 300 troops and police officers since it erupted anew in July 2015. The Turkish general staff estimates over 1,000 Kurdish militants were killed in its anti-terror campaign since mid-December, a figure that pro-Kurdish Peoples’ Democratic Party (HDP) officials argue includes hundreds of civilians.

PKK has been fighting for Kurdish independence from Ankara since 1984. The group, which Turkey considers to be a terrorist organization, seeks to create a Kurdish state in parts of Turkey and Iraq.