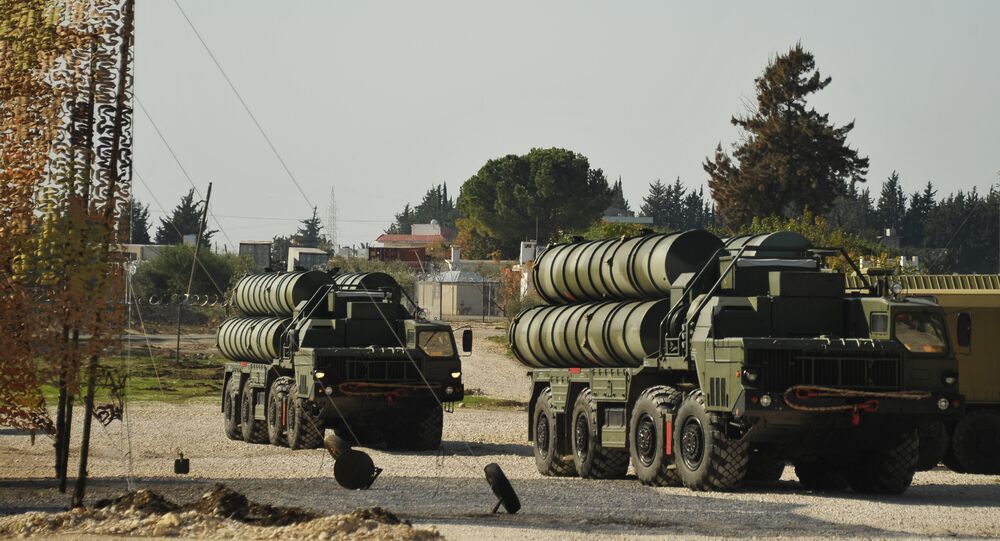 Nearly 20 Russian combat aircraft, an air defense system and some 2,000 personnel will stay at Hmeymim airbase in Syria. According to experts, the task force has several goals – fighting terrorism, supporting President Bashar Assad, and control over the region.

© Photo : Press service of the Russian Defense Ministry
Unexpected? Russia's Pullout From Syria is 'Catalyst' for a Thaw With NATO
Earlier this week at a meeting with troops involved in the Syrian campaign Russian President Vladimir Putin said the number of combat sorties of the Russian Aerospace Forces had decreased from 60-80 to 20 a day.

The president also underscored that the rest of the task force will be capable of accomplishing the assigned tasks in the region.

A squadron of Su-24 tactical bombers, including 9-12 aircraft, will be kept on duty in Syria. During the main stage of the campaign, those aircraft were responsible for the bulk of the airstrikes.

The newest Su-30 and Su-35 jet fighters will also stay at the Hmeymim airbase for aerial protection, a Defense Ministry source told the Russian newspaper Vedomosti. A source close to the military command confirmed to RBK that Su-35 4++-generation jets will stay at the base.

Russia deployed four Su-35s to Syria on January 31, 2016. The Defense Ministry has not additionally reported on their withdrawal.

Moscow will also keep its air defense system in Syria. "Russian air defenses will be on combat duty in Syria and will be used against all targets posing threats to the Russian forces," Putin said. According to him, an S-400 medium- and long-range complex and a Pantsir-S1 air-defense system will stay on duty in Syria.

© Sputnik / Igor Kovalenko
Russia's Pullout From Syria Hailed as 'Brilliant Tactical Move'
In addition, Ka-52 and Mi-28N attack helicopters have been spotted at the airbase, but their exact number is unknown.

According to military expert Viktor Litovkin, the rest of the Russian task force will accomplished its goals.

He outlined several main objectives: conducting airstrikes on terrorist targets, supporting the Syrian Army and its allies, and control over the airspace in the region.

"All the three aircraft are capable of carrying out airstrikes against terrorists. But the Su-24 is not designed for aerial combat, and it needs support of jet fighters," he told RBK.

In addition to the jets, Syrian airspace and Hmeymim air base will also be protected by an S-400 air defense system, Ruslan Pukhov, director of the Analytic Center for Strategies and Technologies, said.

"There could be three sudden threats – coming from Turkey, Israel and the US," he assumed.

He added that with an S-400 deployed to the base the Russian Aerospace Forces could not only establish a no-fly zone not over the Hmeymim airbase but also the entire province of Latakia where the bulk of the Syrian Army is concentrated.

The system has a maximum acquisition range of 600 km and a maximum striking range of 400 km.

"Within this radius, any aircraft can be tracked and then escorted by jets," Pukhov explained.

According to Litovkin, attack helicopters may be used against small groups of enemies and armored targets which cannot be hit by bombers.

© Sputnik / Dmitriy Vinogradov
Russian Warplanes Continue Strikes on Terrorists in Syria, Conduct 25 Daily Sorties
"The Ka-52 and the Mi-28N are armed with the Vikhr and Ataka anti-tank missiles as well as a 30-mm gun," the expert said.

He added that terrorist may have man-portable air defense systems so attack helicopters could operate "accurately" at nighttime.

What is more, some 200-300 civil specialists will remain at Hmeymim base. Military personnel will not be able to maintain aircraft and helicopters on their own.

"As many as 2,000 personnel are required to operate the base. However, not all of them will be involved in combat missions," Pukhov concluded.
Both experts agreed that the rest of the Russian forces in Syria will be enough for the current objectives.

"Amid the peace talks the intensity of combat has decreased. This is why the current of the Russian forces in Syria is rational," Litovkin said.

Russian Defense Ministry
Farewell to Arms: Real Results of Russia's Air Campaign in Syria
At the same time, at his meeting with the troops Putin stressed that Russian can build up its military presence in just a few hours.

The news of Russia’s pullout from Syria came as a surprise and made headlines across the world.

When the operation began last September, Western politicians and experts voiced concerns that Russia risked repeating the Afghan scenario. But, five months after Moscow announced its withdrawal, saying that their objectives had been accomplished.

Here are the main results of the Russian involvement in Syria:

— Intra-Syrian dialogue has resumed, laying the ground for further political settlement
— Parliamentary elections have been scheduled
— The possibility of a foreign intervention has been prevented
— Over 500 residential areas have been liberated by the Syrian Army with the support of Russian airstrikes
— Major supplies routes for extremists have been disrupted
— Finally, the capabilities of Syrian forces have been restored. The Syrian Army received modern weapons from Russia.

It is evident that this is not about a complete withdrawal of Russian forces from Syria. Russia will keep a small force at the Hmeymim base. It will also continue its technical and military assistance to Damascus.

At the same time, some objectives are not accomplished yet. Among them are defeating Daesh and other extremist groups, restoring control over the Syrian-Turkish border, liberating Aleppo, Damascus suburbs and Hama.

© Sputnik / Dmitriy Vinogradov
The Peace Seeker: What Lies at the Root of Putin's Foreign Policy in Syria
The Syrian Army in its current state is able to successfully reach each of these goals. The threat still remains that extremists would continue attacks across the country. However, with the support from main Syrian allies, Russia, Iran and Lebanon, now the chance to curb this threat is much higher than before the Russian engagement.
© Sputnik / Dmitriy Vinogradov
Al-Baath University students hold rally in support of Russia's military operation in Syria

This fact dictates the current configuration of Russian forces in Syria. The bulk of military power was withdrawn, but if needed Moscow can get back to Syria at any moment.

The balance of power in the Middle East is now changing, an article in Il Giornale read. Moscow has turned into the key player in the peaceful process in Syria and is now cooperating with Washington on the issue.

"Russia is not leaving Syria. Instead, it is taking the leading role in the Middle East, making the region less dangerous for the rest of the world," the author wrote.

From Palmyra to Raqqa: Syria, Russia on Course to Hit Daesh Where It Hurts