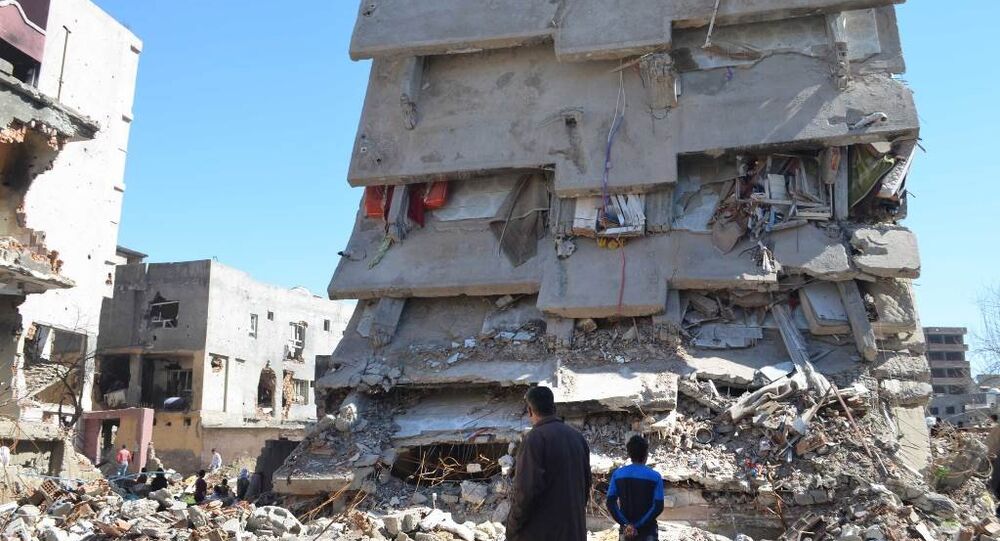 In December 2015, Turkish forces launched an operation in south-eastern regions of Turkey, mainly inhabited by Kurds. During clashes between Turkish troops and militants of the Kurdistan Workers’ Party (PKK) several towns were seriously damaged. Hundreds of civilians were killed.

© AP Photo / Emrah Gurel
This is Not Syria, This is Turkey: Tour of Ruined Kurdish Town of Cizre (VIDEO)
RT correspondent William Whiteman was among the first journalist to visit the area of the military operation. In an interview with Lenta.ru Whiteman told about the brutality of Turkish troops and atrocities of Ankara-backed Syrian extremists.

Whiteman said that he could not simply come to Turkey as a journalist of a Russian broadcaster. He had to pretend to be working for a Western media outlet to enter Turkey.

"I know that the Turkish authorities arrest those they suspect of ties with Russia. Then they are accused of espionage," Whiteman said.

When Whiteman and his team arrived to Cizre, the city hit the most by Turkish forces they were the first international journalists to visit the conflict zone.

"Turkish media portrayed all local residents as terrorists and justified the operation. When locals discovered I’m British they were glad they’d have a chance to spread the word about atrocities in the town," he said.

Then Whiteman described what he saw when his team was walking across the town of Cizre.

© AFP 2020 / ILYAS AKENGIN
Kurdistan Gov't Calls Turkey's Operation Against Kurds Genocide
"All of the buildings were covered with bullet holes. When we turned around the corner I saw ruins all over the streets where children were playing. […] I inspected the first building. There was a room all bullet-riddled. There was blood on the floor. Locals told me this was a place where Kurdish militia troops were executed," Whiteman said.

Then, the journalist told that he visited a basement floor where 50 people were burned alive. However, Turkish forces removed all the bodies to hide the fact that civilians were killed.

According to the Turkish military, during the operation over 1,000 terrorists were killed. At the same time, locals said that in Cizre alone 500-600 civilians were killed.

© AP Photo / Cagdas Erdogan
Turkish Forces Kill Over Hundred Kurds in Cizre in One Week
"I think that thousands of civilians were killed in southeastern Turkey during the operation. Sometimes Turkish forces are especially brutal. They can impose a curfew in the area and then shell with heavy artillery. In the basement floor of one of the buildings 150 people were killed in a fire," the journalist said.

What is more, Whiteman said that alleged extremists from Syria were involved alongside TUrkish forces in the operation. And their actions were the most brutal, including decapitating civilians and burning them alive.

"They wore long beards and spoke Turkish with a heavy accent. They were not from the Turkish army. Probably, they were from Syria. Turkey has had long relations with extremists groups from Syria. Ankara may have involved them in the operation in Cizre to do its dirty work," the journalist suggested.

"Currently, the UN and human rights organizations are ignoring the situation with Kurds in Turkey. They should launch their own investigation. Everyone should realize that a genocide of Kurds is underway. Kurds are the largest ethnic group without a state. And they have been persecuted for centuries," the journalist said.