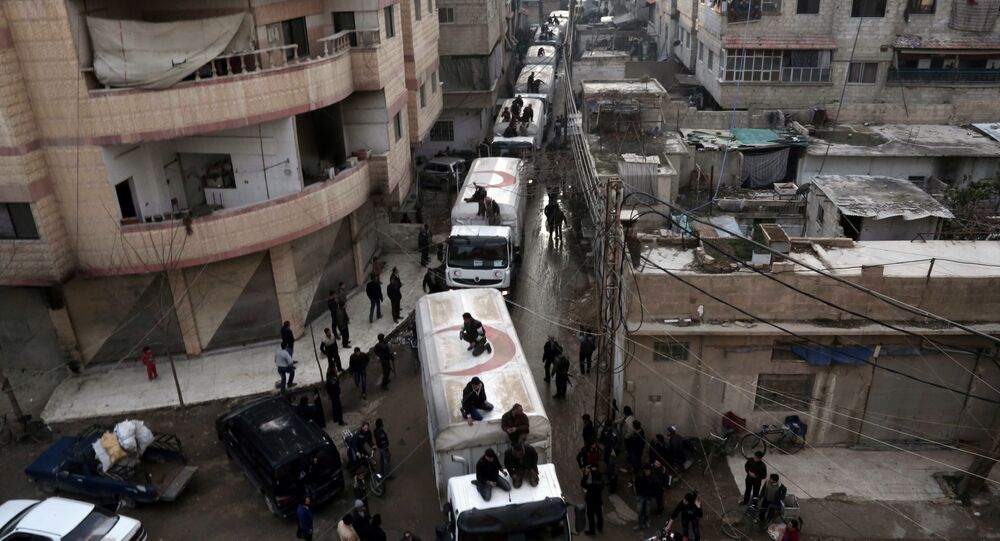 Chemical weapons have been used at least 161 times during Syria's five-year civil conflict, with nearly 1,500 deaths resulting from such attacks. That’s according to a new report by the Syrian American Medical Society.

© Sputnik / Andrey Stenin
Daesh Attacks Iraqi Town of Taza With Chemical Weapons - Militia Spokesman
Its estimates are based on the accounts of the medical personnel from hospitals the charity supports. Chemical weapons have been used even after the Security Council in 2013 ordered to eliminate Syria’s chemical weapons program.

The order followed an attack on a Damascus suburb that killed hundreds of civilians. Meanwhile, last Sunday a three-year-old girl was killed and 600 people wounded in chemical attacks reportedly carried out by Daesh in northern Iraq.

The tragedy happened just a few days after one of the attacked villages was shelled with “poisonous substances,” after which dozens suffered from choking and skin irritation.

These reports add up to the previous cases of Daesh chemical attacks, most of them unverified by the official sources.

Radio Sputnik discussed the issue with Hamish de Bretton-Gordon, chemical weapons adviser to NGOs working in Syria and Iraq. He is a former commanding officer of the UK Chemical, Biological, Radiological and Nuclear Regiment and NATO's Rapid Reaction CBRN Battalion.

According to the adviser, chemical stock pile in Syria probably went array, around 100 or 200 tons went to Daesh. He said that back in 2013 Americans and Russians tried to remove the chemical weapons but the weapons still found their way to Daesh. "Only last weekend there was a Daesh chemical weapons attack and it appeared to be mustard gas. It killed a small girl and injured over 600 people.”

Gordon further spoke about how he has been working with the Iraqi Kurd Peshmerga in Northern Iraq recently. "They have been attacked nine times in the last two weeks with what appears to be mustard agent gas."

© AFP 2021 / STAFF
Pentagon Confirms Capturing Daesh Chemical Weapons Leader in February
Talking about whether it is possible to destroy these weapons, Bretton-Gordon said, “If the coalition and the Russian military can find it than it will be relatively easy to destroy it with precision weapons.”

“As we have seen only two weeks ago, al-Alsari who was the head of the Islamic State chemical weapons program was captured by US Special Forces and almost a year ago the previous head of Daesh was killed in a drone strike, so if you have the intelligence on where these places are and where these people are then they can be taken out.”

He further spoke about how according to him Daesh’s use of chemical weapons is the matter of last resort as the major offensive to push them out of Mosul begins. “I think their use of chemical weapons is the last ditched effort to save them. I do think we will see quite a lot of that in the next coming weeks and months particularly in the South from where Daesh is being pushed out of Mosul.”

He also spoke about the refugees in Europe and how the jihadists can infiltrate the migrants and sneak into Europe and even into Russia.

“There are jihadists amongst those traveling to Europe and from a Russian perspective the Chechens who are some of the jihadists within Daesh would no doubt be thinking of exporting it to Russia. So not only do the UK and the US need to be on their guard but Russia which has porous borders is also on the target list. I am sure the security forces in Russia are keeping a close eye on this to ensure they can predict anything coming from Chechen jihadists,” the analyst said.

He further spoke about how in the Middle East the chemical weapons are primarily used as psychological warfare against the public and how these terrorists inflict fear in people.