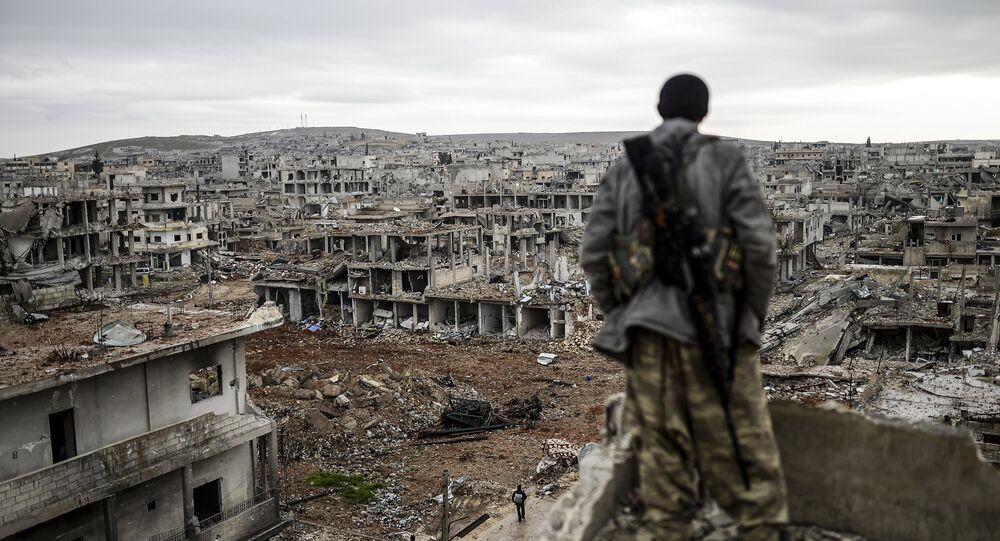 The new Syrian Constitution should fully guarantee rights and freedoms of the Kurds living in the country, a member of the Syrian opposition delegation formed after meetings in Moscow and Cairo, Qadri Jamil, told Sputnik on Friday.

GENEVA (Sputnik) — On Thursday, the Syrian Kurdish Democratic Union Party (PYD) and allied groups in several areas under Kurdish control announced the creation of a federal region in northern Syria.

"The decision to proclaim the federalization was premature, but all the Kurdish rights should be guaranteed in the new constitution," Jamil, one of the leaders of the Syrian Popular Front for Change and Liberation,  said.

"The Kurds have just demands but they should be fulfilled within a legal framework <…> I do not support unilateral decisions on such crucial issues," he pointed out.

© REUTERS / Rodi Said
Syrian Kurds Ready to Present Federalization Project to Int'l Community
"The main problem is to determine the type of the republic. We must have a parliamentarian-presidential republic. Our president has too much power. We need to discuss the redistribution of powers between the government, the parliament and the president. This is a very important issue,"  he stressed.

Earlier, the head of the Syrian opposition group formed at the Hmeimim air base Ilian Masaad told Sputnik that the new Constitution for Syria drafted by the group envisages creation of a mixed parliamentarian-presidential republic.

According to Qadri Jamil, the composition of Syria's future transitional governing body is a major point of contention at the intra-Syrian talks in Geneva.

"The first problem is who will lead during the transition period <…> There are differing points of view regarding the leadership, a consensus must be found. The Geneva I communique from June 30, 2012, stated that power should be vested fully in a transitional body that will comprise regime and opposition figures based on mutual agreement. All of this should be specified," Jamil noted in an interview with Sputnik.

Three opposition delegations are taking part in the negotiations: the High Negotiations Committee (HNC), which was formed in Saudi Arabia in December, the delegation formed following talks in Moscow and Cairo and the group formed after opposition talks at Hmeimim air base in Syria.

"The Riyadh-formed delegation imagines the body to be similar to a revolutionary council the likes of which were formed in our Arab east following each coup," Jamil said, adding that the Damascus delegation envisions the body as an expanded government.

One of the options being considered for the structure of the transitional governing body is a prime minister with four or six deputies, according to Jamil.

© Sputnik / Ramil Sitdikov
Russian Pullout From Syria to Solidify Geneva Peace Talks - Organization of Islamic Cooperation
However, in order to determine the exact powers to be granted to the future transitional government all parties of the Syrian conflict must engage in direct talks with eachother.

"One of the issues is the determining the transitional authority's powers," Jamil said.

According to politician, the current understanding of the issue is "absurd" as the Geneva communique on Syrian reconciliation describes the powers of the transitional government as "full" without providing any further details.

"Therefore, we need direct talks, as intermediaries would only hinder," Jamil, who is one of the leaders of the Syrian Popular Front for Change and Liberation, asserted.

A new round of Syrian peace talks kicked off in Geneva on Monday. The UN-brokered negotiations between the Syrian government and opposition aim to end the five-year civil in Syrian war by forming a transitional governing body to oversee the holding of elections within 18 months.

Kurds in Northern Syria to Draft Federalization Document Within 6 Months

Creation of Kurdish Federal Region 'Does Not Mean Division From Syria'