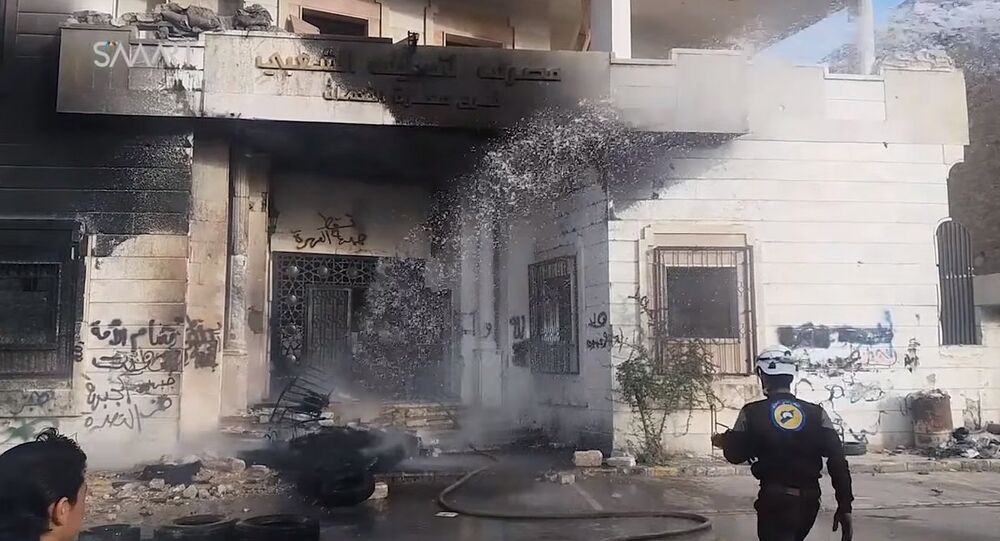 Syrian Ceasefire Turns Violent Rebels Against Each Other

The largely observed ceasefire in Syria has apparently forced some rebel groups which were fighting together against the government troops to use their violence against each other. When Division 13 of the Free Syrian Army and the al-Nusra Front clashed, the jihadists had to escape from a town in Idlib Province.

Reports have emerged that jihadists from the al-Nusra Front, an al-Qaeda affiliate in Syria, who have been stationed in the town of Maarat al-Numan had to escape and retreat deeper into Idlib Province due to the threats made by Division 13 of the Free Syrian Army.

​A video posted on social media shows an attack on the jihadist group headquarters in the town of Maarat al-Numan in Idlib Province and a few buildings being set on fire.

Some of the al-Nusra Front headquarters were completely burned, according to media reports.

Hundreds of people took to the street in Syria's northwestern Idlib Province on Monday, denouncing what they described as the “aggression of the al-Nusra Front against civilians and moderate rebels,” according to reports by the Syrian news agency ARA News.

Another video from the protest in Maarat al-Numan calling for the al-Nusra Front to leave the city #Syria pic.twitter.com/Mm5ThwrGCY

​The protests came two days after the al-Nusra insurgents stormed the headquarters of Division 13, which operates under the banner of the Free Syrian Army (FSA), where clashes claimed the lives of dozens of fighters on both sides, the agency quotes rights activist Samer Idlibi as saying.

The TOW-rockets, it specified, played a major role in expelling the Syrian government from the province of Idlib.

“The protest, which included women and children, roamed the city’s streets under the protection of FSA rebels,” media activist Mohammed Fawzo told ARA News, pointing out “the protesters forced the al-Nusra militants to release four civilians who were detained by the group last week.”

“The angry protesters stormed several headquarters of al-Nusra without any intervention from the militants,” according to an eyewitness the agency interviewed without revealing his name.

​The al-Nusra insurgents, the agency explains, had captured the headquarters of Syrian rebels two days ago and raised their black banners on the building tops.

Reports suggest that al-Nusra has apparently posted an official announcement as a follow up to the attacks, claiming that the ceasefire has resulted in provocations and discrepancies between the rebel groups. The group says it was a “planned action” aimed at “weakening” their forces in the fight against the Syrian government and Russia.

Ceasefire Allows Daily Life in Syria to Return to Normal