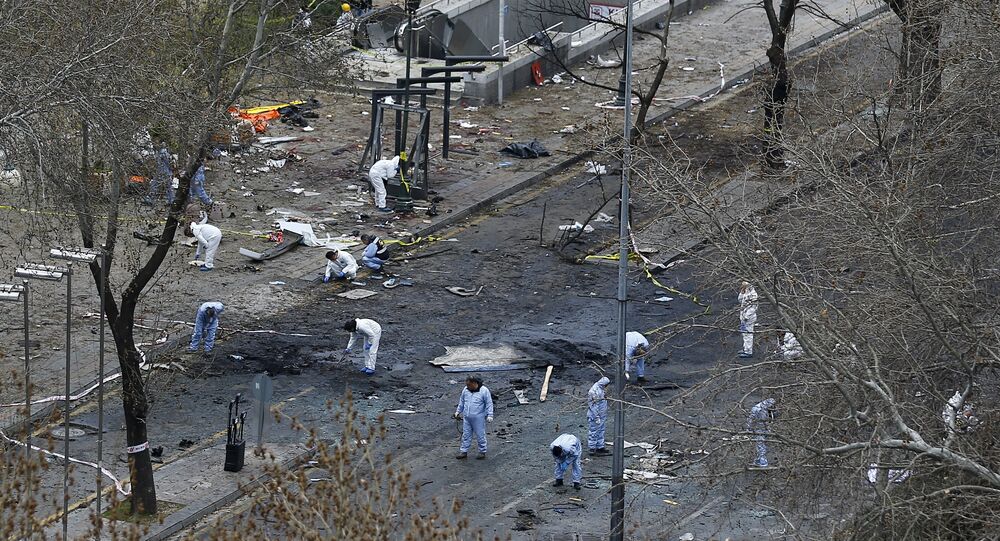 The Turkish government may seek to use the terrorist attack in Ankara on Sunday to bolster its influence over the Geneva peace negotiations on Syria, Wladimir van Wilgenburg told Sputnik.

It will be hard for the Turkish government to respond to the bomb attack that took place in Ankara on Sunday by stepping up its attacks on the Kurds in southeast Turkey because the level of conflict is already high, expert in Kurdish affairs Wladimir van Wilgenburg told Radio Sputnik.

​"I think the operations will continue and the clashes will continue between the PKK and the Turkish armed forces, but they might try to use it to put more pressure on America not to work with the Kurds in Syria," van Wilgenburg said.

The Turkish armed forces are reportedly setting up what they call security zones close to the border with Syria, but Ankara is unlikely to take any further action unless it has the support of the international community, he said.

"I've seen so far that Ankara is building a wall on the Turkish border because they want to stop Kurds crossing the border from Syria into Turkey, but I don't think this will push them for a safe zone because Turkey will not do anything if they don't have support from the US or NATO."

© REUTERS / Salvatore Di Nolfi
New Intra-Syrian Talks Doomed to Fail Without Kurds - Kurdish Delegate
The Turkish government is likely to use the bombing in Ankara on Sunday to try and undermine the Kurds in Syria, but Turkey already has significant influence over the Geneva peace negotiations between the Syrian government and opposition groups, van Wilgenburg explained.

"They will probably try to use it even more to delegitimize the Kurds in Syria and maybe try to link it to the Kurds in Syria but I think in general they already have a very high influence over the Geneva talks because most of the Syrian opposition is hosted in Turkey."

© AP Photo / Burhan Ozbilici
Turkey Suspects 2 Ankara Attack Perpetrators of Being PKK Members
It is not certain who is responsible for the attack on Sunday, but it could result in more violence from Turkish security forces and terrorist groups including Daesh, which has a presence in Turkey and has carried out bombings there in the past, he said.

"We don't know yet who did the attack but if the conflict in the southeast of Turkey continues and Turkey keeps fighting with the PKK and they don't go back to the negotiation table, of course there's going to be more violence in Turkey in general."

"It looks very serious because this is one of the few times that civilians have been bombed in the capital, and the bombing took place in an area where a lot of civilians commute. The first attack in Ankara targeted a military target, and this one seems to be targeting civilians."