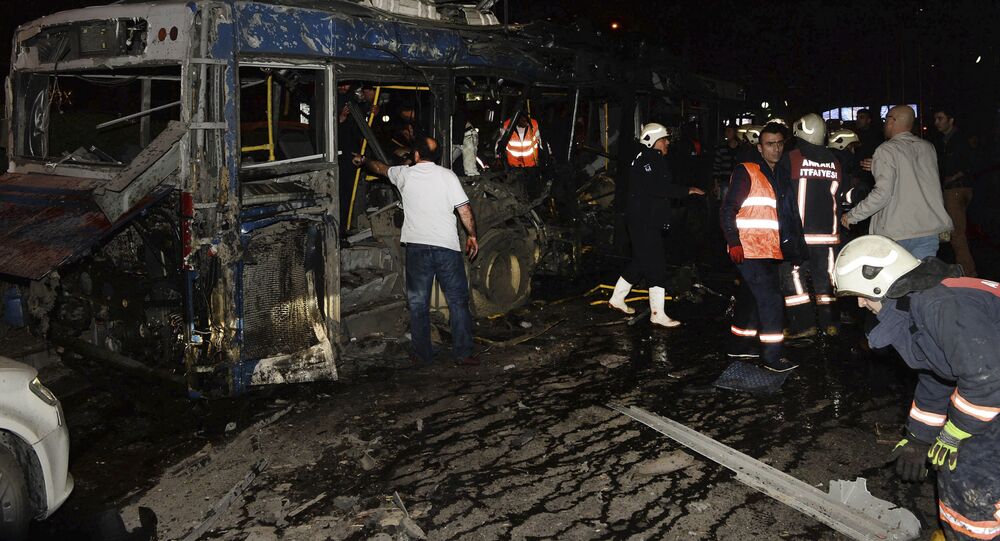 A second deadly terror attack rocked the Turkish capital Ankara on Sunday, claiming the lives of 37 people and wounding 125, less than a month after another bomb left 29 dead in the city; although there was no immediate claim of responsibility, the authorities say the identity of the group behind the attack could be announced within a day.

A car bomb tore through a crowded transport hub in the center of the Turkish capital, near Guven Park. The blast went off at 6:43 pm local time (16:43 GMT), hitting a bus carrying some 20 people.

The blast, which could be heard several kilometers away, sent burning debris showering down over an area a few hundred meters from the Justice and Interior Ministries, a top courthouse, and the former office of the prime minister.

Although there was no immediate claim of responsibility, two senior security officials told Reuters that the first findings suggested that the Kurdistan Workers Party (PKK) appeared to be responsible.

© AP Photo /
Members of emergency services work at the scene of an explosion in Ankara, Turkey, Sunday, March 13, 2016.

The agency quotes one of the security officials, without revealing his name, as suggesting that  the car used in the attack was a BMW driven from Viransehir, a town in the largely Kurdish southeast, which suggested that the PKK and the affiliated Kurdistan Freedom Hawks (TAK) appeared to be responsible.

Interior Minister Efkan Ala said the name of the group behind the attack would likely be announced on Monday after initial investigations were completed.

"Tonight, civilian citizens waiting at a bus stop were targeted in a terrorist attack with a bomb-laden car," Ala told reporters on Sunday evening after a meeting with Turkish Prime Minister Ahmet Davutoglu, the head of the intelligence agency and security chiefs.

"Significant findings have been made, but the organization behind this will be announced once the investigation has been finalized," he said.

An Ankara court has decided to shut off access to social media, including Facebook and Twitter in Turkey. It has become a familiar pattern for courts to issue gag orders on the media following such attacks.

​Last month Turkish authorities imposed a temporary media blackout on coverage of the deadly Ankara attack, which targeted a military bus as it waited at a traffic light; the explosion killed 29 people, most of them soldiers, near the military headquarters, parliament and other key government institutions.

​The Third in a Row

TAK claimed responsibility for that car bombing, which went off on February 17.

Reuters quotes one of its sources as suggesting that the explosives were the same kind as those used on February 17 and the bomb had been reinforced with pellets and nails to cause maximum damage.

​The Sunday attack is the third attack in a row in Ankara, however, this time a civilian target was selected: a public bus at a bus stop during a busy hour —despite being Sunday- at one of the most busy traffic junctions in the Turkish capital.

Reuters also reports that the Sunday bombing came two days after the US Embassy issued a warning that there was information regarding a potential attack on government buildings in the Bahcelievler area of Ankara, just a few km (miles) away from the blast site.

Security message issued by the US Embassy in #Ankara on 11 March: high risk of terror attack in Bahcelievler pic.twitter.com/7iCJqSEHkH

Franz Klintsevich, the first deputy chair of Russia's upper-house Committee on Security and Defense has suggested that the current attack is aimed at provoking Turkey to pursue a military invasion of Syria.

“The rationale of the organizers is quite evident. They apparently count on the attack in the center of the capital, not the first one, to explode the situation in the region; Turkey is literally being pushed to intervene militarily in Syria,” RIA Novosti quotes him as telling journalists.

The senator also added that the Turks are now waiting for a tough response to the deadly attack from the country’s leadership.

“But I hope that it will be an adequate response. Each reckless step could undermine all the efforts of the international community to find a peaceful solution in Syria and then, I am afraid, it will be impossible to start everything again from the beginning,” he added.