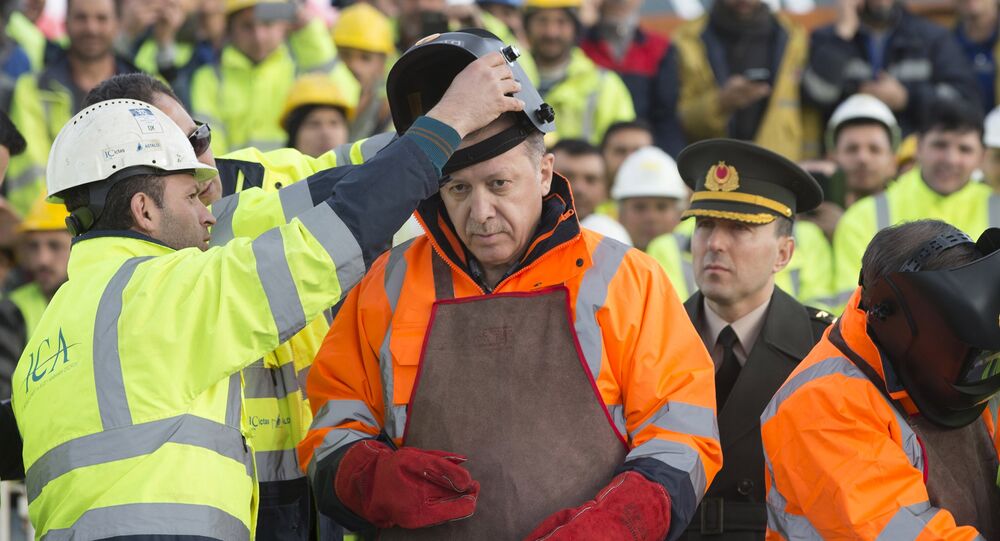 Feeling the Pressure: Erdogan 'May Become Even More Isolated'

The next few months may see the further isolation of Turkish President Recep Tayyip Erdogan, who will continue to antagonize more people at home and abroad, according to Ian Bremmer, a well-known US political scientist.

© Photo : Kai Pfaffenbach
Full Obedience: ‘Turkey Is Keeping Europe on a Leash'
Turkish President Recep Tayyip Erdogan "may soon become even more isolated" as he continues to infuriate more people at home and abroad, US political scientist Ian Bremmer wrote in an article for Time magazine.

According to Bremmer, president and founder of Eurasia Group, an NYC-based political consulting firm, Ankara will "continue to bear the brunt" of the consequences of its strained ties with Moscow, which deteriorated drastically after Turkey's downing of a Russian warplane in Syria in November 2015.

He also pointed to Turkey's NATO allies, such as the United States, being unhappy about Erdogan's policies, including his stance on the fight against Daesh (ISIL/ISIS).

"Washington is angry that Turkey is dropping many more bombs on Syrian Kurds than on ISIS, the focal point of US air attacks," Bremmer said.

© REUTERS / Jonathan Ernst
Breedlove: Risk of Turkey-Russia Confrontation 'Remains Credible'
According to him, "some Europeans suspect that Erdogan will pocket more European cash and concessions while doing little to keep his end of the bargain by stemming the flow of migrants from Turkey."

"Turkey’s government and European leaders are working to forge a deal to better manage the migrant crisis, but it’s unlikely to produce the results Europeans want — and Erdogan may soon become even more isolated," Bremmer said.

Additionally, Erdogan is facing a raft of domestic problems, including those pertaining to the tourism industry, which Bremmer said "hopes visiting Iranians will replace the Russians who are no longer coming."

On top of that, Erdogan will have to grapple with "opposition within his own party" as his clout continues to show signs of abating, according to Bremmer.

"A purported meeting several weeks ago that included former President Abdullah Gul, former Deputy Prime Minister Bulent Arinc and other senior party members has fed speculation that rivals want to limit Erdogan's influence over the workings of government," he said.

© REUTERS / Yves Herman
Turkey's Erdogan Is 'Complicit' in Europe's Migrant Crisis
He added that all this comes amid Erdogan's efforts to rewrite the Turkish constitution to strengthen his presidency and eliminate checks on his power, something that Bremer said is unlikely to be achieved.

"Erdogan's history suggests he'll try to bully his way into more power anyway. In the process, he'll antagonize more people–both at home and abroad," he concluded.