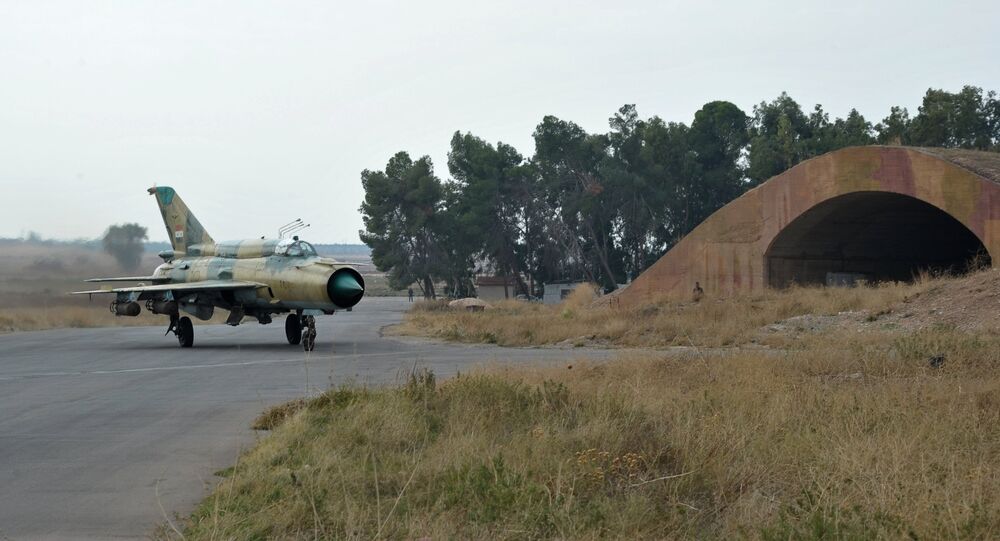 A Syrian Air Force MiG-21 jet reportedly has been downed near a military airfield in Hama Governorate.

© Sputnik / Michael Alaeddin
Radicalize This: Syrian Army, Russian Warplanes Hit Militants in Hama Province
Syrian Air Force MiG-21 has been downed by armed militants near a military airfield in western Hama Governorate, a military source told Sputnik. One pilot was able to eject to safety, the second one died in a failed emergency landing, according to the source.

"A Syrian warplane MiG-21 was shot down near the Hama military airfield," the source said.

A Syrian military source later explained Sputnik that one pilot of the MiG-21US jet was able to eject to safety while the second one died in a failed emergency landing.

"After the Syrian Air Force plane was hit, one pilot ejected and landed at the al-Magir village, which is controlled by the [government] army. The second pilot attempted an emergency landing at the Hama military airfield. The landing failed and the pilot died," the source explained.

This week, the Hama Governorate has seen clashes between the Syrian government troops and militants from the two main terrorist groups operating in Syria – Islamic State (Daesh) and the al-Qaeda linked Nusra Front.

Neither of the two terrorist groups is part to the ongoing cessation of hostilities in Syria, which was brokered by the United States and Russia two weeks ago. The truce has largely held, despite reports of sporadic violations.