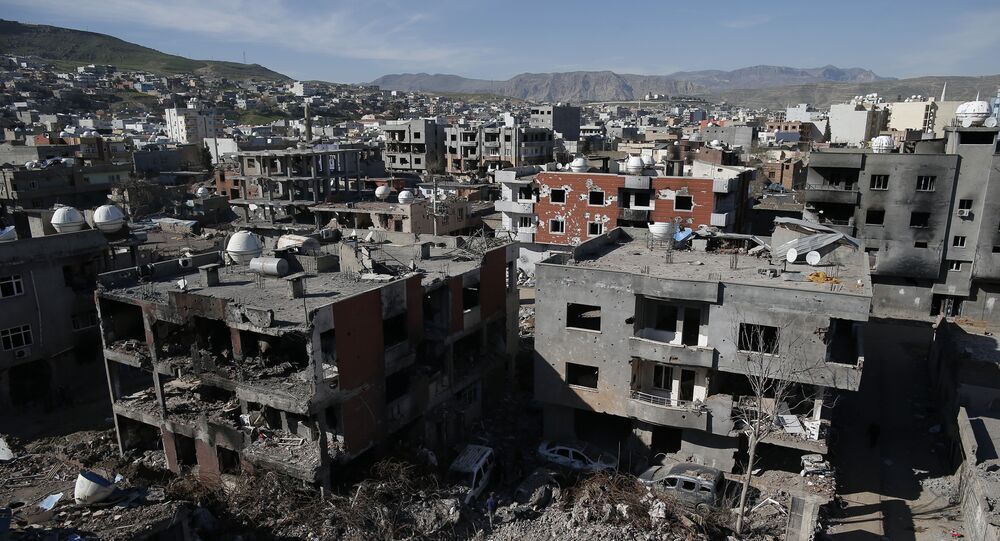 RT correspondent William Whiteman visited southeastern Turkey. He made an exclusive report from the town of Cizre where Turkish forces carried out an operation against Kurds.

© AP Photo / Cagdas Erdogan
Turkish Forces Kill Over Hundred Kurds in Cizre in One Week
Shocking reports are multiplying about Turkey’s crackdown on Kurds. In September 2015, the Turkish Armed Forces besieged the town of Cizre. For eight days, its residents were cut off from food and medical supplies.

Last month, it was reported that Turkish forces surrounded a burning multi-storied building and locked up people inside. Some 150 people were reported to have been killed in the fire. However, no official confirmation has been made.

RT correspondent William Whiteman was among the first journalists to visit Cizre and tried to figure out what is happening in the region.

It was difficult to get authorization to enter the town, and after several days of waiting the team made it.

Cizre looks like the ruined Syrian Aleppo, but in Turkey there is no war.

The journalists visited the location where people were killed in the fire.

"I would never wish anything like that on anybody. Erdogan destroyed our world. He burned us," one local resident told the journalists.

© AFP 2021 / Ilyas Akengin
Turkey Completes Anti-Terrorist Operation in Southeast Town of Cizre
"This was a residential building where women and children lived. Erdogan killed them all with heavy artillery. He destroyed this building. They say they’re fighting terrorists. But where are the terrorists? All victims were local civilians," she said.

Answering the question on how many people were killed in Cizre, she said: "300, 400… maybe 500 people. They were old men, women, and children. They even killed pregnant women."

Holes from artillery shelling can be seen everywhere, not only on the walls of destroyed buildings.

The bodies of those killed in the operation have already been removed. But the smell of death still hangs in the air across the city. More bodies are likely to be buried in the ruins.

In the basement floor of another building, the journalists found one more place where Kurds were burned. One Cizre resident said that 45-50 people were killed there.

Since December 2015, the Turkish Armed Forces have been carrying out a large-scale operation in southeastern parts of Turkey, mostly inhabited by Kurds. Human rights organizations have repeatedly reported mass killings among civilians.

Many buildings in Cizre were totally destroyed, and many others were damaged by fire.

In January, a Turkish human rights organization revealed that over 160 civilians had been killed in the Kurdish area since the beginning of the operation. Ankara has insisted that the operation targets only militants of the Kurdish Workers’ Party (PKK). However, the Turkish military has been accused of a multitude of atrocities in the region.

"Wounded residents of Cizre hid in basement floors. We couldn’t even send an ambulance to them. Nearly 200 people were killed in Cizre," Kurdish activist Nurcan Baysal told RT.

In late February, in Strasbourg, some 3,000 Kurds took part in a protest against the Turkish military operation in Cizre.